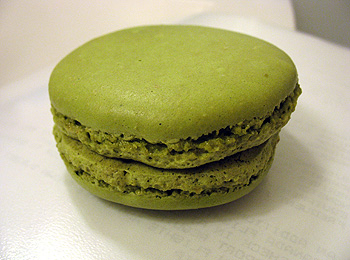 Contents hide
Macaroons are small, soft, chewy cookies (aka biscuits in the UK.)

They are made from beaten egg white, sugar, and either almond paste or ground almonds. A coconut variety swaps in shredded coconut for the almond. In fact, to many North Americans, “macaroon” now implies “coconut,” although almond was the original.

Either variety may have chocolate in them.

In France, they are made from ground almonds, not almond paste, and may be flattened, for shaped into little balls. The French use many different flavourings: coffee, lemon, pistachio, raspberry, strawberry, vanilla, etc. Two Paris bakeries well-known for their Macaroons are Ladurée, and Hermé, on rue Bonaparte near the Place Saint-Sulpice fountains.

Macaroons are popular at Passover as no flour is used.

There are even recipes now for Macaroons made from Kellogg’s Corn Flakes.

In making them, you just use the egg white, not the egg yolk.

Once they have been piped onto baking sheets, tap the sheets a few times to let all air bubbles escape.

You bake the Macaroons in a moderate over (325 to 375 F / 160 to 190 C), depending on the recipe, for about 20 minutes. The cookies should emerge from the oven still soft inside. They can be difficult to peel off the parchment or waxed paper that you have to line the cookie sheet with. It is easier to get them off before they have cooled completely. Some people advice using rice paper to line the cookie sheet with because though small bits may still stick, it is edible.

The technique used by Hermé in Paris is to use egg whites that have been “liquefied” to break down their albumen. This lets the egg whites be beaten to a higher volume. (See: Liquified Egg Whites.)

Macaroons reputedly evolved in Venice, Italy, during the Renaissance.

Disregard, as usual, stories about Catherine de Medici bringing them to France in her Vuitton hand luggage. Also disregard any stories about them being given out by St Macarius (of Alexandria, died about 401 to 405 AD.)

In 1837, Eliza Leslie, in her “Directions for Cookery”, published recipes for both coconut and almond macaroons.