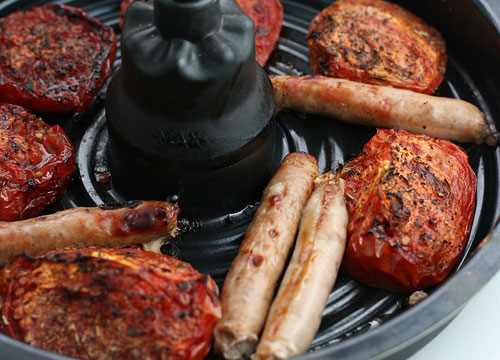 Maillard Reaction is a term used to describe what happens when, under the influence of enough heat, sugars react with proteins and amino acids.

When it occurs in food, it gives a flavour and colour to foods.

It occurs with simple sugars — fructose, lactose, and one form of glucose. Maillard enthusiasts refer to these as “carbonyls.” An amino acid called “lysine” is particularly likely to react with sugars.

One reason for dredging meat is that starches such as flour will break down in the presence of enough heat into simple sugars, providing material for a Maillard Reaction.

For it to occur, water cannot be present, because water lowers the highest temperature that is possible. A Maillard Reaction starts at about 50 C (122 F), but goes through 3 stages, with the final browning stage only kicking in at 154°C (309 F.) Meat in boiling water won’t get hotter than the boiling point of water, 100 C / 212 F, which is why boiled meat doesn’t brown. Oil will get hotter though than 154°C (309 F), which is why meat fried in oil is able to brown,

Even though roasted meat still has water actually inside it, the surface of the meat loses its water through evaporation, enabling a Maillard Reaction to occur on the surface.

Additional colouring of the meat may be caused by plain old “charring” of the meat.

The process was identified by Louis Camille Maillard (4 February 1878 to 12 May 1936.) He was born in Pont-à-Mousson in the Lorraine region of France (specifically, the département of Meurthe-et-Moselle.) His father was a doctor. Louis studied at the University of Nancy. By the age of 24 (c. 1902) he was working in the Faculty of Medicine at the University of Paris.

There, he was trying to solve the puzzle of how amino acids formed proteins. He discovered that when heated together, sugars and amino acids formed a brown mixture such as he had seen on food. He made his discovery public in 1912, publishing it in 1913 in a thesis on it entitled “l’Action de la glycérine et des sucres sur les acides alpha-aminés.”

In 1914, he enlisted in the French army, ended up being assigned to labs working on general army health. In 1916, he was named a Chevalier de la Légion d’Honneur. In 1919, he returned to civilian life, accepting a position at the Faculty of Medicine at Alger University in Algiers, Algeria. He died in 1936 on a trip back to Paris, and was buried at Pont-à-Mousson.

In his lifetime, he was actually more known for his studies on urine.

Some people hypostulate that a Maillard Reaction is responsible for the image on the Shroud of Turin.