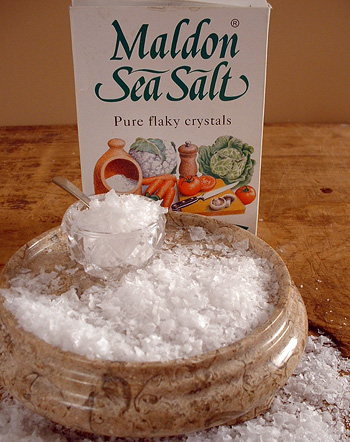 Maldon Salt is an English sea-salt. It comes in large, thin, uneven, crunchy salt flakes that have a very clean, pure salt taste.

It is meant to be a finishing salt, used at the table in small amounts, rather than in cooking. You might be tempted to want to put it in a salt mill, but this is ideal salt for a salt cellar or salt pig. Just put out a small dish of it on the table, and let guests get pinches of it for themselves.

Some fans reckon that you end up using less of Maldon than you would of other table salts because the flakes look so big, and the crunch reminds you how much salt you have put on the food. As well, the clean taste of the salt is very satisfying. There are absolutely no additives, not even anti-caking agents.

Maldon Salt is made in Essex County, England, in the town of Maldon (known by the locals as Maldon on the Mud) by the Maldon Crystal Salt Company.

To make the salt, seawater is taken from estuaries. In spells of prolonged rainy weather, during which the estuaries are more filled with fresh water coming down to the sea than saltwater lapping in, they have to send barges out to bring seawater in. This kind of weather explains why from time to time the salt will be hard to find in stores. Dry weather is good, as then the salt content in the estuaries will be high. The water is filtered, then put into large salt pans the size of several bathtubs together. The pans are heated to a boil, then the heat is reduced. crystals form, and drop to bottom of the salt pans. About 16 hours later, the crystals will float back up to top, at which point the heat is turned off. The pans are allowed to cool overnight, then in the morning the salt is raked off the top. It is allowed to drain for 2 days, then it is dried in an oven.

Though production has been ramped up since Roman and even Victorian times, the company is still largely quite “relaxed” about business. The company remains a small, family-owned operation.

The salt is sold in 125 g and 250 g boxes, and 1.5 kg tubs. The large, tub sizes are a relatively recent addition to their product line-up.

Though it’s quite popular in England, and more expensive than table salt, Maldon Salt isn’t particularly a foodie item. You can buy it at practically every grocery store in Essex.

How expensive is it? It’s definitely something you think about, but it’s not extortionate, as one box lasts you a very long time, and the price compares favourably with French sea salts.

Maldon Salt is one of the very best finishing salts, both owing to its taste and its crisp texture.

Because it is flaky, you would need three teaspoons of Maldon salt to equal in weight 1 teaspoon of finely-ground table salt. However, because in most recipes you really don’t need as much salt as they call for, you can just substitute measure for measure; 1 teaspoon for 1 teaspoon. That being said, it’s a waste to use Maldon in cooking. Reserve it for use as a finishing salt at the table.

The Romans devised the original methods for harvesting the salt here during the time that Essex was a Roman colony.

“When I have said this I think I have done Malden justice, and said all of it that there is to be said, unless I should run into the old story of its antiquity, and tell you it was a Roman colony in the time of Vespasian, and that it was called Camolodunum. How the Britons, under Queen Boadicea, in revenge for the Romans’ ill-usage of her – for indeed they used her majesty ill – they stripped her naked and whipped her publicly through their streets for some affront she had given them. I say how for this she raised the Britons round the country, overpowered, and cut in pieces the Tenth Legion, killed above eighty thousand Romans, and destroyed the colony; but was afterwards overthrown in a great battle, and sixty thousand Britons slain. I say, unless I should enter into this story, I have nothing more to say of Malden, and, as for that story, it is so fully related by Mr. Camden in his history of the Romans in Britain at the beginning of his “Britannia,” that I need only refer the reader to it, and go on with my journey.” — Daniel Dafoe, Tour through the Eastern Counties of England, 1724.

This web site generates income from affiliated links and ads at no cost to you to fund continued research · Information on this site is Copyright © 2023· Feel free to cite correctly, but copying whole pages for your website is content theft and will be DCMA'd.
Tagged With: British Food, Essex Food, Finishing Salts, Roman