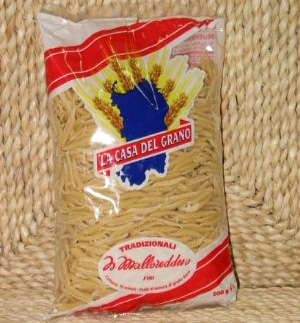 Malloreddus is a pasta made from semolina flour and water. Each piece will be about 1 inch (2.5 cm) long and ¼ inch (.5cm) wide. The front of each piece is open like a canoe; the back of each piece has very pronounced grooves on it to catch sauce. Though the grooves used to be made by pressing the pieces of pasta against straw baskets, now of course there are machines that do that. For home production, Sardinians used a piece of specially-designed glass with grooves in it, called a “ciurili.”

Malloreddus pasta is made in Sardinia, Italy. As Sardinia was for many centuries occupied by the Arabs after the fall of the Roman Empire, locals there acquired the taste for spice such as saffron. You will come across Malloreddus with both saffron-flavoured dough or plain dough pasta. Even the plain dough pasta, though, is sometimes served with sauces that have saffron in them.

Other times though, it will be served with sauces varying from butter and pecorino — Pecorino Sardo, of course — to a thick tomato sauce with chunks of meat in it.

Though this is often referred to as “gnocchi” or “gnocchetti” (little gnocchi) in Italian, Malloreddus is very different from the moist potato gnocchi you probably usually think of. It is sold dried, and should be cooked as you would any dry pasta.

This web site generates income from affiliated links and ads at no cost to you to fund continued research · Information on this site is Copyright © 2022· Feel free to cite correctly, but copying whole pages for your website is content theft and will be DCMA'd.
Tagged With: Sardinian Food