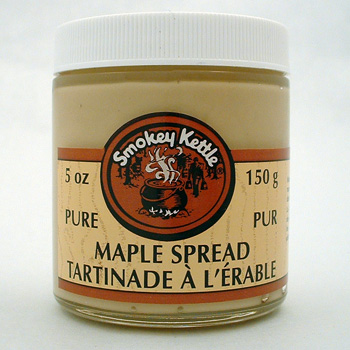 Genuine Maple Butter does not contain any butter; rather, it is a spread made from 100% maple syrup. The syrup used to be cooked down to a spread consistency. It would be formed into blocks of very thick Maple Butter wrapped in waxed paper. Keeping it spreadable, though, was always a problem, and over time the edges would dry out and crystallize.

Nowadays, the syrup is boiled down to a “soft ball” stage, cooled, then whipped to give it the same consistency. The whipping both helps the butter to stay spreadable, and reduces costs for producers as it introduces air.

There are also now “maple spreads” that contain some maple syrup for flavouring, along with other ingredients (such as cane and corn syrup, and butter or cream) to reduce the cost of the product. Note though that “maple spread” doesn’t always refer to these imitation products; it can equally be used to mean the 100% pure Maple Butter, as can “maple cream.”

The confusion doesn’t end there. Canadians always seemed clear that “Maple Butter” didn’t actually contain any butter, just as “apple butter” doesn’t, but many Americans, where maple syrup is a religion in only part of the country, are less clear. This has led, in fact, to recipes for Maple Butter which actually contain butter, usually in a ratio of two parts butter to one part maple syrup.

This expectation — that Maple Butter contains butter — has led in turn to some American producers actually bottling “Maple Butter” that contains butter and maple syrup or maple flavouring. In the absence of standardized North-American wide labelling laws, this confusion will likely continue for some time and by the time anything is done, the legal definition of Maple Butter may well end up being a mixture of butter and maple syrup.

This web site generates income from affiliated links and ads at no cost to you to fund continued research · Information on this site is Copyright © 2022· Feel free to cite correctly, but copying whole pages for your website is content theft and will be DCMA'd.
Tagged With: American Food, Canadian Food, Maple, Spreads