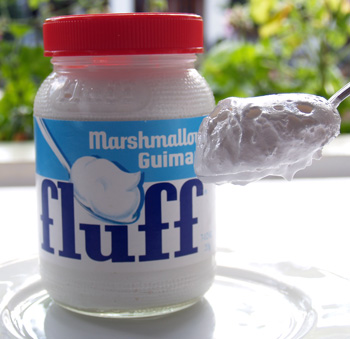 Contents hide
Marshmallow Cream Spread is made from essentially the same ingredients as marshmallows are (corn syrup, sugar syrup, vanilla flavour, and egg white), but in different proportions and without the gelatin so that it won’t set.

The Marshmallow Cream Spread with the brand name “Fluff” is the original, made by Durkee Mower.

A sandwich. To make, two take pieces of white bread (preferably standard supermarket bread.) Spread the side of one with peanut butter, and the side of the other piece with Marshmallow Cream. Place together so that the spreads meet up together in the middle to form the filling. Serve. 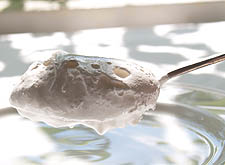 Great on top of hot chocolate and cocoa. Really good in fudge.

When making Rice Krispie squares with your kids, using Marshmallow Cream provides a safer alternative to your kids melting the marshmallows with butter on the stove.

Among the classic recipes that call for Marshmallow Cream Spread are Grasshopper Pie, Rocky Road Pie, and Whoopie Pies.

When making a Rice Krispie Square recipe that calls for 5 to 6 cups of Rice Krispies, instead of the marshmallows (the recipe will call for somewhere in the range of 10 to 16 oz of marshmallows) you can use 3 ½ cups (1 x 7oz jar) of Marshmallow Cream.

Marshmallow Cream was being made as early as 1917 in Massachusetts. Durkee-Mower was founded in 1920 to make Marshmallow Cream under the brand name of “Fluff”. In the 1930s and 40s, they sponsored the “Flufferettes” radio show.

In 1934, a 1 pound “can” of Durkee-Mower’s Marshmallow Fluff could be got for around 21 cents (Rival Food Stores ad in the Fitchburg Sentinel, Fitchburg, Massachusetts, 12 April 1934.)

For decades, Kraft Jet-Puffed Marshmallow Creme had a recipe on the side of the jar for “Easy Fantasy Fudge”. In 2002, Kraft dropped the recipe and replaced it with another fudge recipe. Complaints have poured in since.

This web site generates income from affiliated links and ads at no cost to you to fund continued research · Information on this site is Copyright © 2022· Feel free to cite correctly, but copying whole pages for your website is content theft and will be DCMA'd.
Tagged With: American Food, Sandwiches