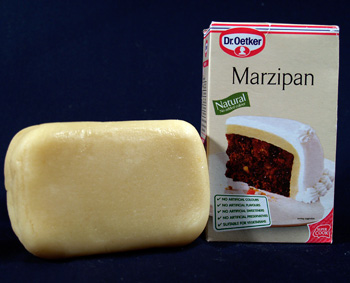 Marzipan is very finely-ground almond paste with more sugar (about twice as much as almond paste) and sometimes egg whites. It is essentially a nut “dough” that is dry enough to roll out and shape by hand.

Marzipan is used to cover cakes, and to make moulded edible decorations out of. In the UK, it is frequently used to cover Christmas cakes and wedding cakes before Royal Icing is applied. The marzipan prevents the dark colour of the cake from leeching out into the Royal Icing, and the stiff Royal Icing from ripping up the cake’s surface.

You see a lot of both the Marzipan and Royal Icing afterwards on the sides of people’s plates.

In the UK and in North America, Marzipan is basically regarded as pretty naff or kitsch at this point, but it is still very popular in Europe, especially Germany and Austria. In North America, there is an annoying habit for distributors to label it as almond paste, which is very unhelpful.

You can buy Marzipan in tubes at stores. You can also buy it shaped and coloured like little animals, ranging from crocodiles to hedgehogs.

Apricot jam is also often used to stick the layer of Marzipan onto Christmas cakes.

Once opened, refrigerate in a sealed container for up to a year. If it becomes hard during storage, zap on high in the microwave for 2 or 3 seconds to soften.

It’s a myth that Marzipan was invented in Lübeck, Germany in 1407. It was already known in Italy and France in the early 1300s. It is far more likely something that Arabic bakers came up with, and that crusaders came back raving about.

Some think that the word Marzipan might be a derivation from or corruption of an Arabic word “mawtaban”; others suggest “marchi panis” (St Mark’s bread), or as yet another option, “mazaban”, wooden boxes that almonds were shipped in during the 1200s.

During the Middle Ages, it was called “massepain” in English.