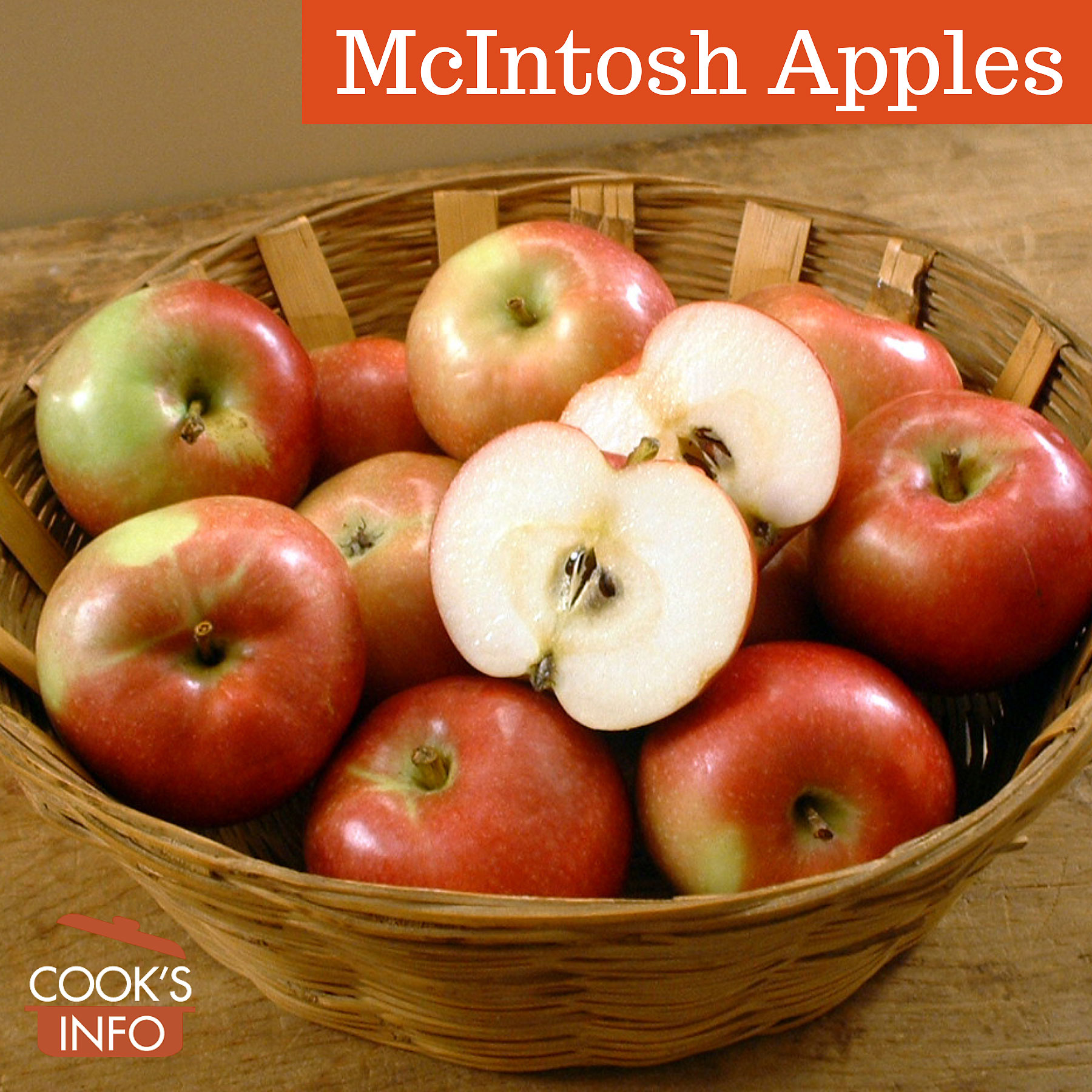 McIntosh apples are, as of 2020, still the most well-known, ubiquitous apple in North America, though their popularity has been under attack for several decades from many other apple varieties.

McIntosh trees are very hardy; oftentimes, they are the only ones in an orchard left standing after a bad storm.

Note that despite being “mc’s”, their nickname is “mac.”

A “mac” starts its commercial life after picking as a crisp, slightly tart piece of fruit. It tends to get quite sweet, though, the older it is, and lose any balancing “tang” it had.

Some people say they are heartily sick of McIntosh apples. It’s not that there’s anything wrong with the apple, per se. It’s just that for decades it was just about the only apple you could buy. In North America there is still always such a glut of them, with every apple farm pumping them out by the trainload, that they end up in storage forever, where they start to dry out and get mealy, until they are bundled into 5 and 10 pound plastic bags and sold as a “generic, all-purpose” apple, for everything from lunch bags to pies.

Choose ones with a shiny skin and the stem still in it; a missing stem can indicate an overripe McIntosh; a dull skin is an indication that the apples been around for a while.

A McIntosh apple is not really an all-purpose apple; it’s terrible for cooking in any dishes (such as pies) where you want the apple to keep its shape. It’s far better as a fresh-eating apple.

John McIntosh was a Scotsman whose parents had moved with their family to New York State. He later moved up to Ontario in 1796. 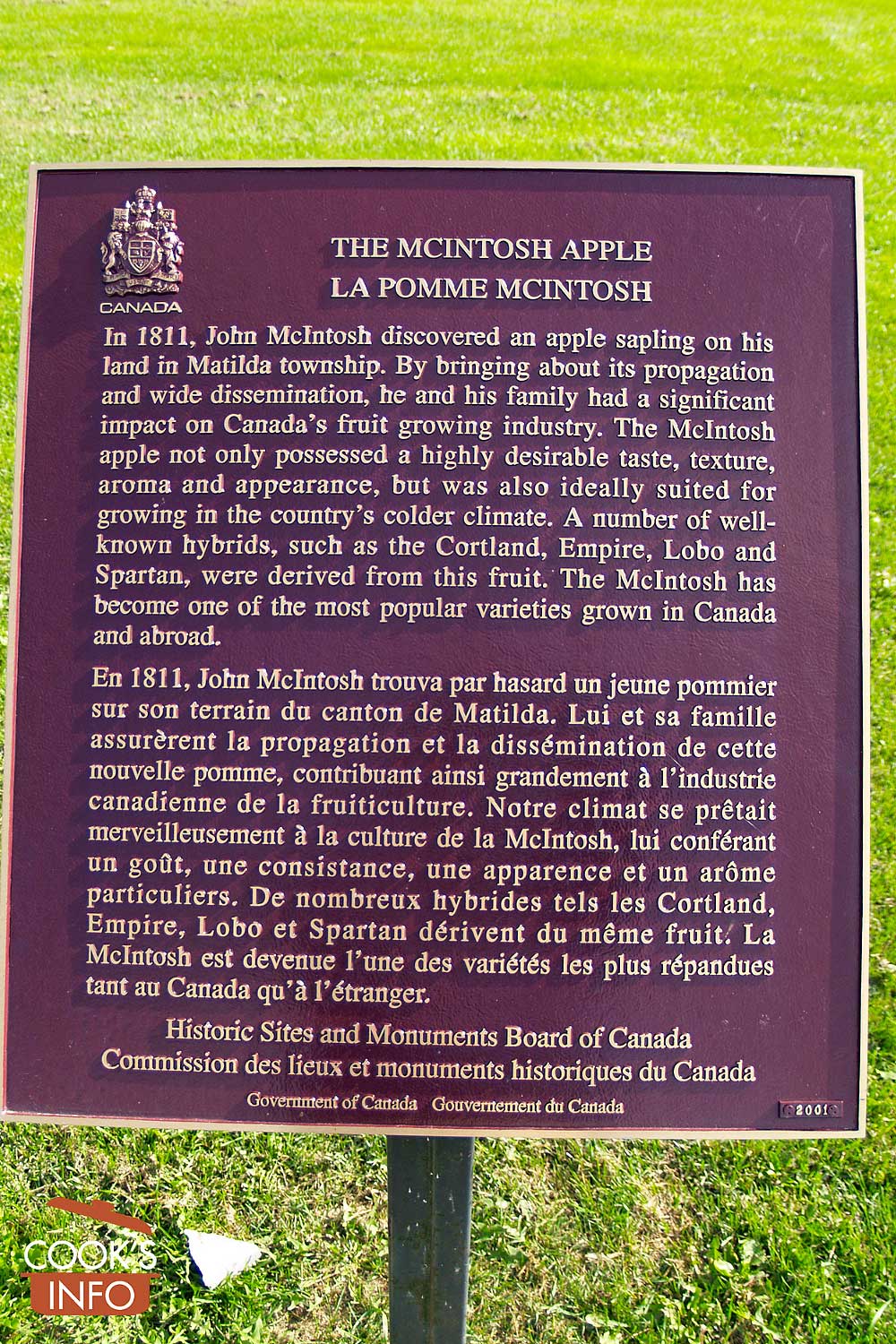 In 1811, he found a clump of about apple 20 trees growing on land he had acquired in Dundas County, Ontario, Canada. He transplanted the trees to be closer to his house. All but one died. He nursed that tree along, and it became the great-grandmother of all McIntosh apple trees. That tree died in 1908.

Many grafts had been taken from that great-grandmother tree, including some taken by a Samuel Smyth, who worked for McIntosh. Smyth started his own orchard in Dundella, Ontario, which today (2012) is a 24-hectare commercial operation known as Smyth’s Apple Orchard, run by Sandra Beckstead, Smyth’s great granddaughter. It is across the road from the site of the first McIntosh tree. 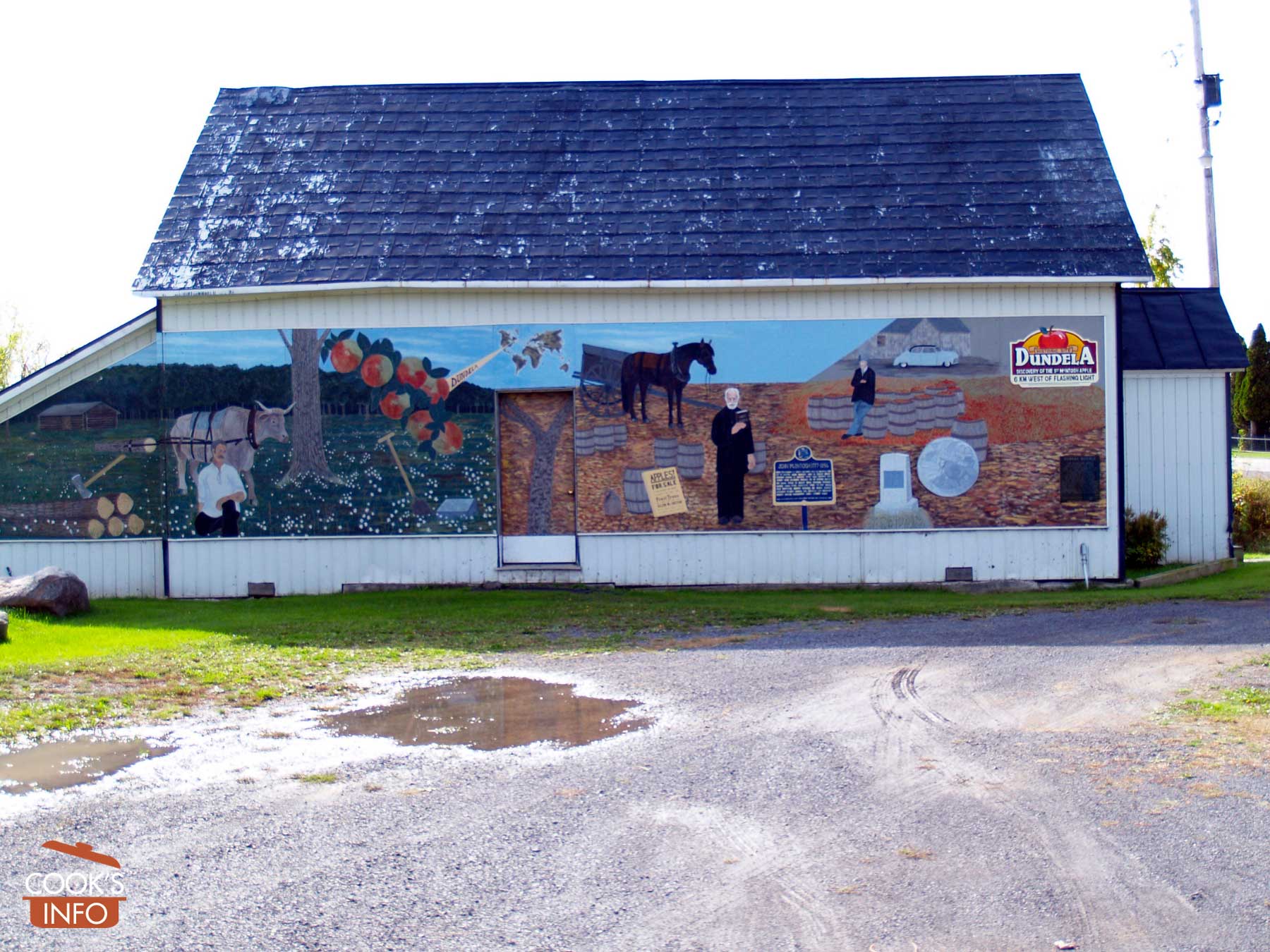 In the summer of 2011, the last-known of the trees grown from those first-generation grafts taken by Smyth died. The tree was 150 years old. The year before, it had still managed to produce 3 bushels of apples.

At least a dozen cuttings were taken before the tree was cut down, with the aim of cloning the tree. The cuttings were grafted onto root stock in nearby Upper Canada Village. Three took root and are growing.

“(Sandra) Beckstead said while there are some 35 variations of the McIntosh in circulation now, the original was distinct. ‘They were much crispier, stayed fresh longer, they were the true McIntosh,’ she said of the fruit from that tree.” [1] CBC News. Oldest McIntosh apple tree descendant cut down. 25 August 2011. Retrieved from http://www.cbc.ca/news/offbeat/story/2011/08/25/ottawa-mcintosh-apple-tree-dies.html

McIntosh trees appear to be a cross between Fameuse and Detroit Red apple trees. 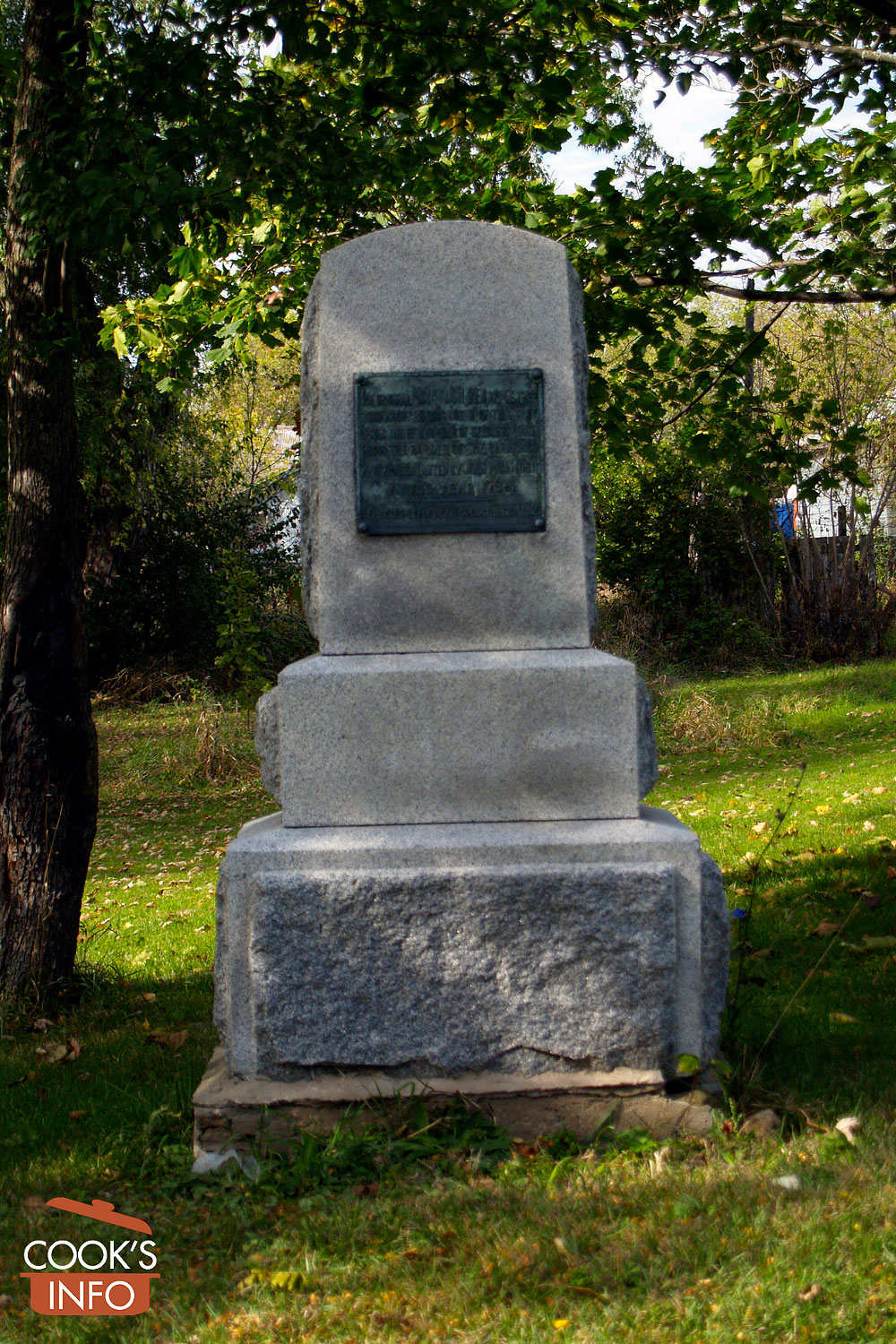 The tree actually used to be some 20 rods (100 metres / 330 feet) north of this monument. The exact location is now on private property and is inaccessible. © CooksInfo / 2005

“The original McIntosh apple tree stood about twenty rods north of this spot. It was one of a number of seedlings taken from the border of the clearings and transplanted by John McIntosh in the year 1796. Erected by Popular Subscription, 1912.” [Ed: the 1796 date on the plaque is wrong.] 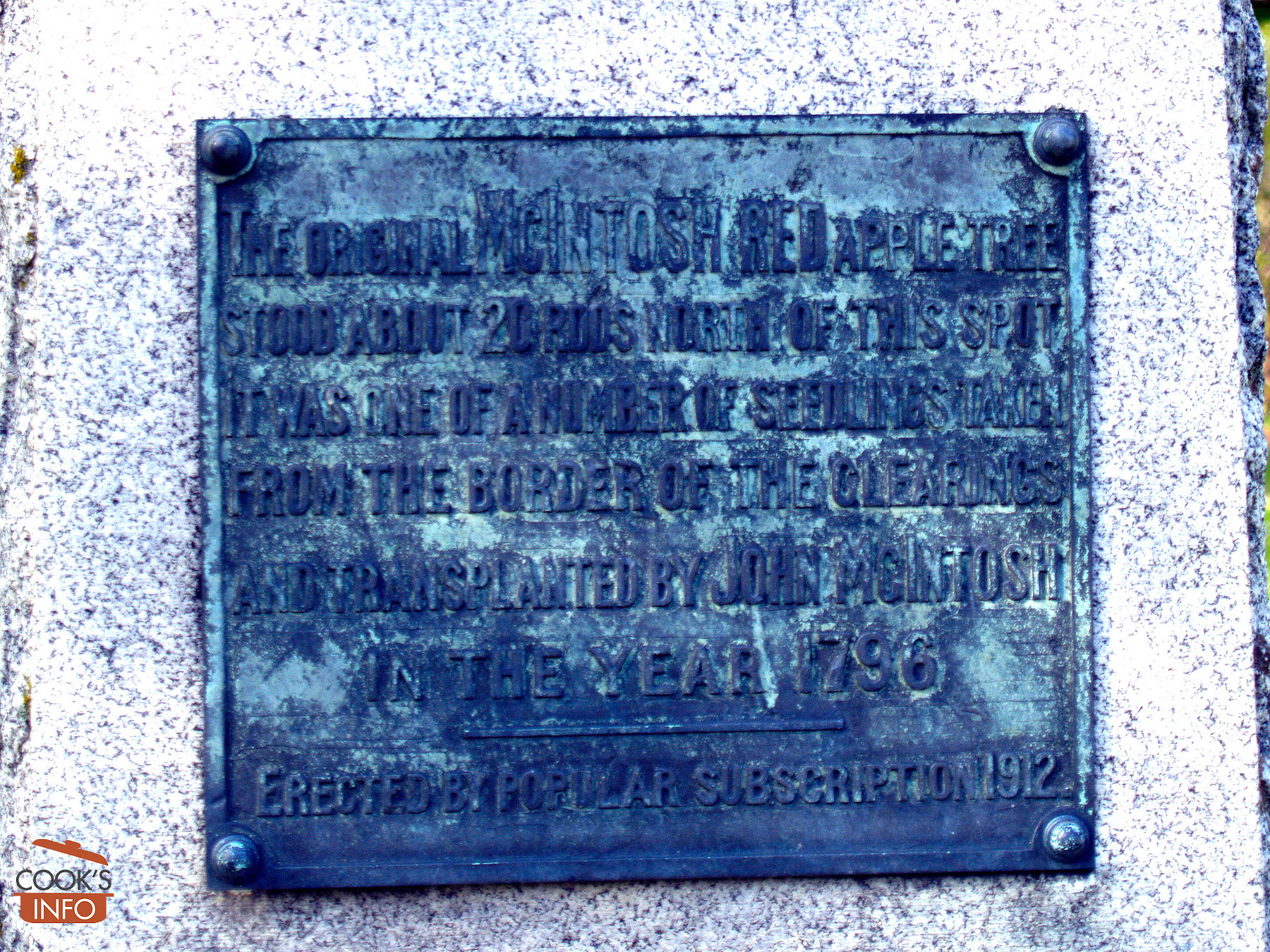 The above monument was erected “by popular subscription”. There is also a provincial plaque. 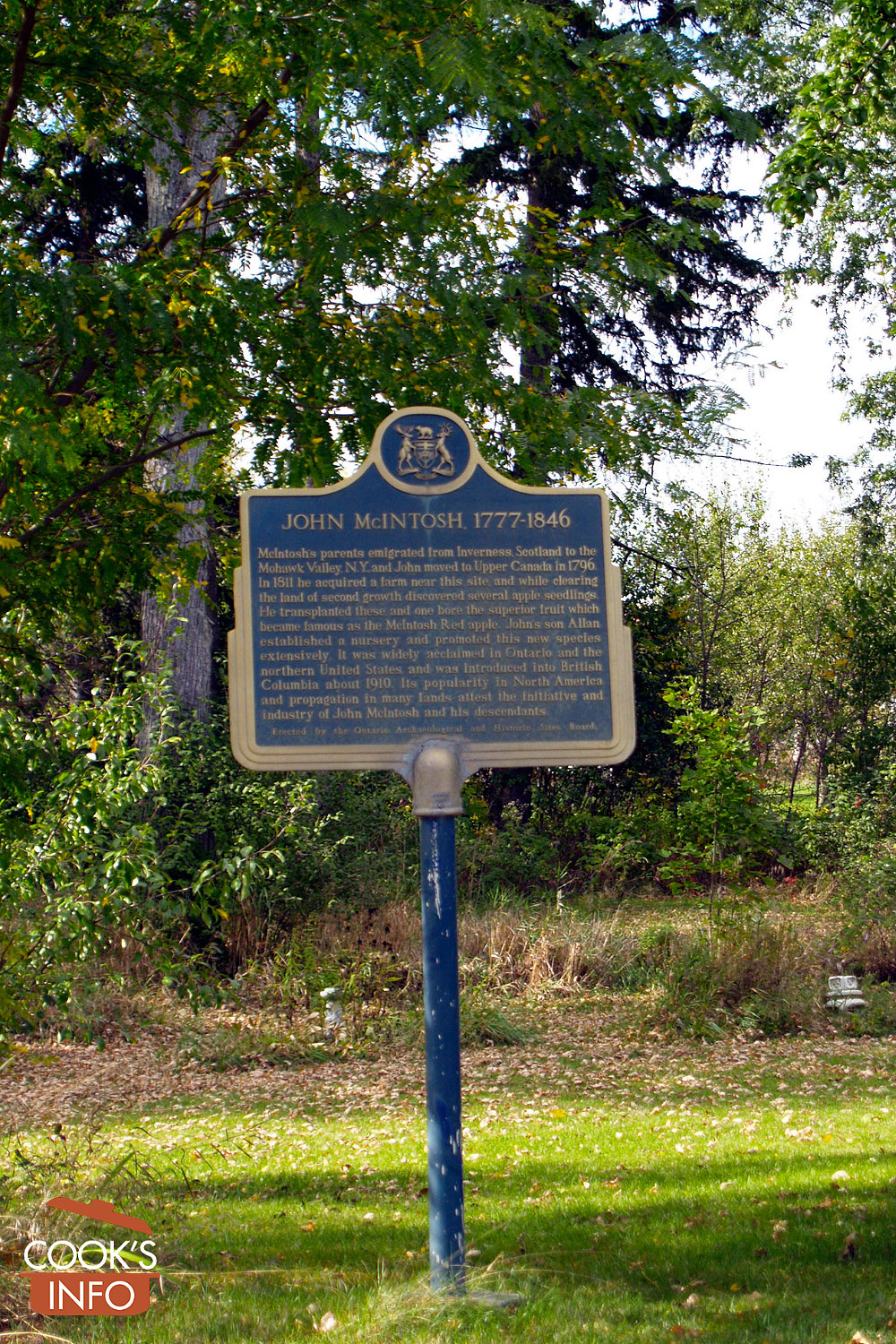 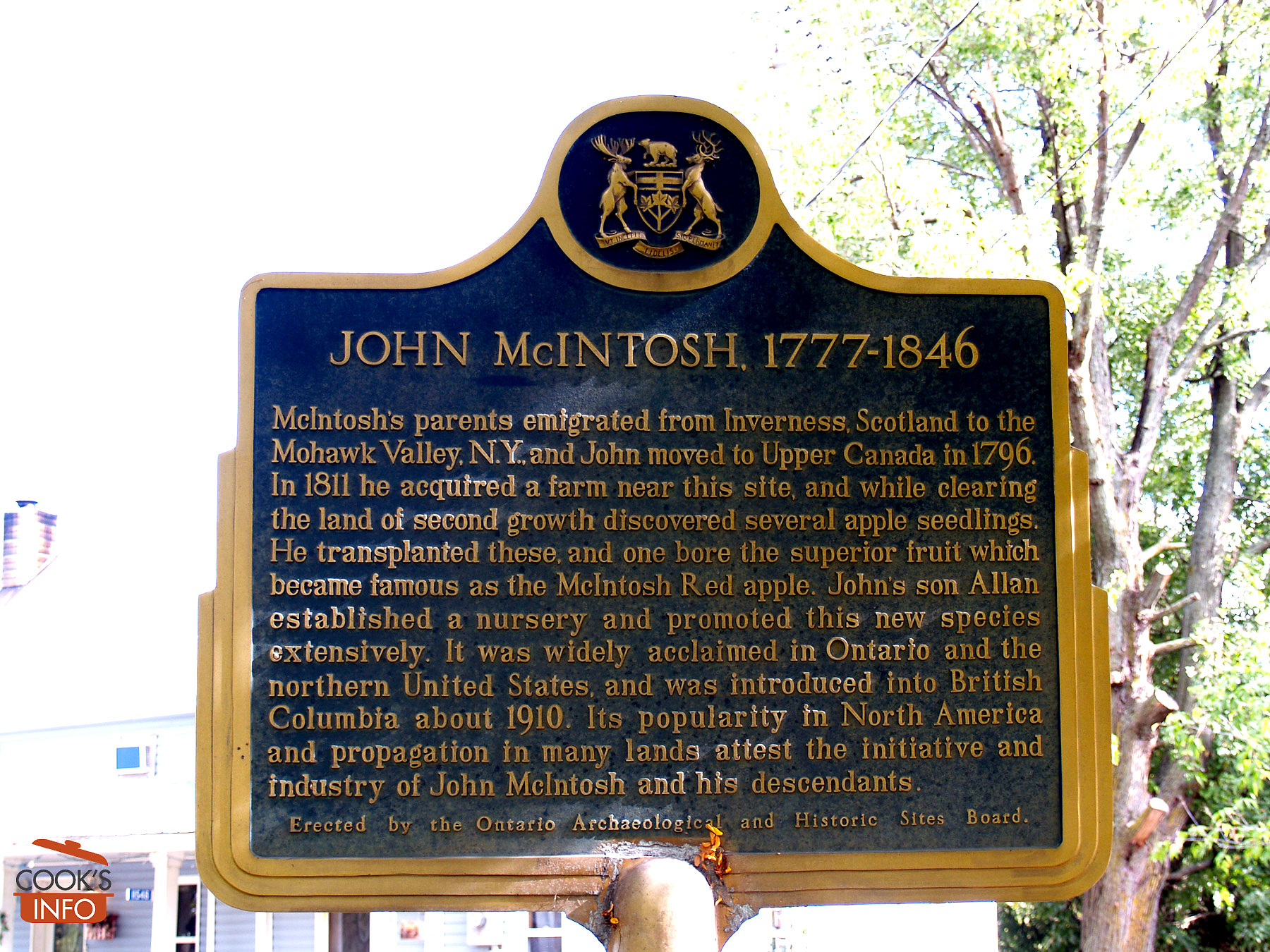 “McIntosh’s parents emigrated from Inverness, Scotland to the Mohawk Valley, N.Y., and John moved to Upper Canada in 1796. In 1811 he acquired a farm near this site, and while clearing the land of second growth discovered apple seedlings. He transplanted these, and one bore the superior fruit which became famous as the McIntosh Red apple. John’s son Allan established a nursery and promoted this new species extensively. It was widely acclaimed in Ontario and the northern United States, and was introduced into British Columbia about 1910. Its popularity in North America and propagation in many lands attest the initiative and industry of John McIntosh and his descendants. Erected by the Ontario Archaeological and Historic Sites Board.”

“More than a hundred years ago a number of men and women who were known as United Empire Loyalists came over from the United States and settled in Ontario. Some of these new settlers took up land in the eastern part of the Province, along the shore of the St. Lawrence River. Among them was a young farmer named John McIntosh, who came from New York State and settled in the county of Dundas, near the place which is now known as the Dundela.

At that time there were only a few settlers in the Province. These early pioneers had to clear their own land and build their own houses and, needless to say, they endured many hardships and had few comforts. One day in the year 1796, while John McIntosh was at work cutting down trees and clearing away the underbrush on his farm he came upon a clump of young apple trees, about twenty in all. No one knew how these seedlings had happened to grow there; but it is probably that some passing travelers – Indians it may be – had camped in this sheltered spot on the edge of the forest, and that the young trees had sprung up from the seeds of apples which they were using as food.

In a new country there are generally very few apples, for it takes some years for the trees to reach their full growth. So John McIntosh left the seedlings untouched, and a few days later he transplanted them to the clearing close to his house. When in the course of a few years the young trees began to bear fruit, it was found that the trees were of different varieties. But unfortunately the trees did not thrive, and at length all of them died except one, which proved to be very hearty. The apples from this tree were a good size and excellent flavor, and, to add to their other qualities, they were a beautiful red color. The tree continued to bear fruit year after year, and its red apples soon became famous in that part of the country. Of course the kind of apple that is different from all others must have a name, and in the course of time these apples became known as the “McIntosh Red.”

While John McIntosh was living, the family were content merely to gather the apples for their own use, and no attempt was made to produce new trees. But when his son, Allan McIntosh, grew up he started a small nursery and begin to sell trees which were offshoots of these famous “McIntosh Red.” As a result, the new variety of apple soon became very widely known. Everyone admired its beautiful colour, and, because of its other fine qualities, it soon came to be looked upon as one of the best winter apples.

In the meantime the old tree was still hardy and vigorous and continue to bear about bountiful harvest as before. Thus year after year past, until a link it was nearly 100 years old. Then a dreadful calamity befell it. One day in the year 1893 the farm house was burned down. The old tree stood only fiften feet from the burning building, and all the limbs on the side nearest the house were burned away. But in spite of this, it continued to bear fruit for fifteen years more. Then a sudden change took place. In the spring the tree burst into blossom, the leaves came out, and the bluebirds ang in its branches as before. But during the summer the apples dropped off, the leaves began to turn yellow and fall to the ground, and at last only the bare trunk and leafless branches were left. The old tree was dead and the only thing now left to do was to cut it down.” [2]Stevenson, O.J. The Story of the McIntosh Red. In: Ontario Reader. Book Three. Toronto, Canada; T. Eaton Company. 1927. Page 36.

McIntosh apples were actually known also as Gem apples up until 1935.

This web site generates income from affiliated links and ads at no cost to you to fund continued research · Information on this site is Copyright © 2022· Feel free to cite correctly, but copying whole pages for your website is content theft and will be DCMA'd.
Tagged With: Canadian Apples, Canadian Food