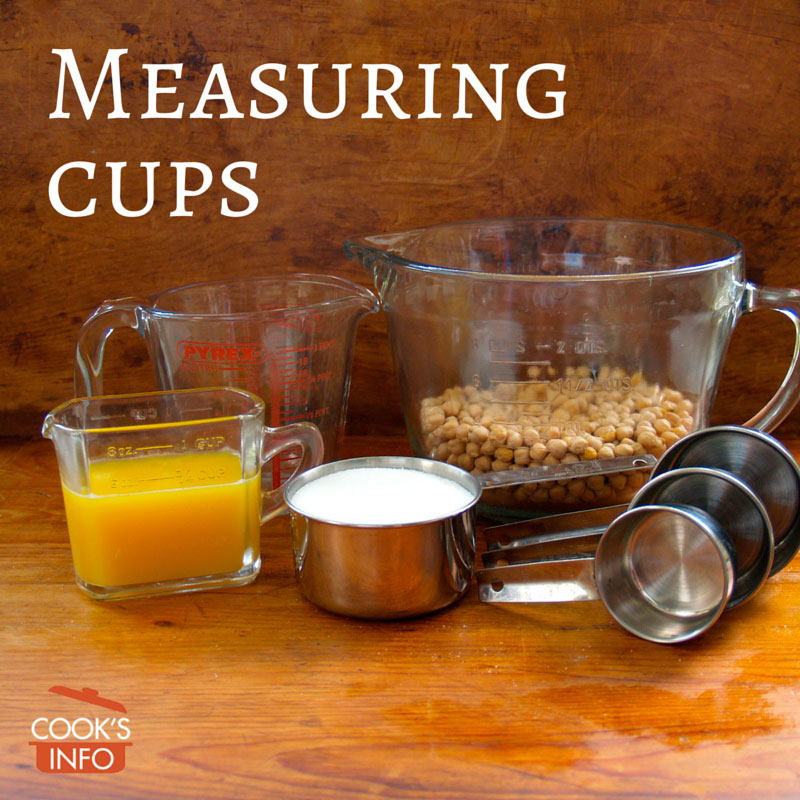 A measuring cup is a demarcated vessel used to measure ingredients.

The challenges of using cups as a measurement

One of the difficulties in measuring with cups is that “a cup” is not a legally defined term nor is it a term of commerce. Items that are measured in American kitchens by volume using cups, such as sugar, butter and flour, are actually sold by weight. A pound of flour is always a pound of flour, whether sifted or not, but this is not so for a cup of flour. If you take a cup of flour and sift it and put it back in the cup, you will now have more than a cup of flour because the added air in the flour will have increased the volume of it. Another example is a cup of walnuts: whole, halved, chopped, and ground will all yield a different weight of walnuts.

In an attempt to control this possible disparity, recipe writers will often attempt to describe precisely how they want you to put the ingredient in the cup by using adjectives such as generous, loosely-packed, tightly-packed, scant, rounded, heaping, sifted, level, etc.

Coffee machine makers seem now to refer to a cup as something that must be a 100 or 125 ml (3 or 4 oz) cup. Their cup measurement doesn’t match up with any kitchen measuring cup, let alone any coffee cups or mugs that anybody actually uses to drink out of. But they can do that, as cup is not a legally defined term.

In North America, there are cups for dry measure and cups for liquid measure. Most cooking instructors direct you to buy both. In truth, measuring cups are hardly ever labelled as such in the stores, perhaps because few outside of Home Economics instructor circles really know the difference. If you did manage to find some with packaging clearly labelled as one or the other, unless you knew the difference to look for you, some people may not be able to remember which was which after they got the packaging off.

The single difference between wet and dry cups are the rims. Liquid ones have a pour spout on them, dry ones don’t. Dry measuring cups are meant to be filled right up to their rim. They generally look like large measuring spoon sets. They have straight sides, flat narrow rims and flat bottoms. The idea is that you take a knife and whoosh it across the top to level it off. Good ones have the measurement both on the handle, and on the back, so that if you hang them up, you can easily see the measurement on the back for quick access.

Dry measuring cups are easy to use as scoops straight in the flour bin, etc. Some put very long handles on them for just this purpose, so that your knuckles don’t end up dusted in flour. But if the handles are too heavy, they won’t sit level on a counter — the heavy handles just tip the flat bottoms over. Be careful, though, using metal ones to scoop up stuff like hard butter, etc: the handles tend to bend easily.

Dry measuring cups are actually technically liquid measures — they measure in volume. 1 cup of water from them will be 8 oz, just as in a liquid cup. There is no official “dry cup” — there couldn’t be, as dry varies so much depending on what you are weighing: rice, macaroni and flour don’t fit into the cup in the same way, so it’s only the volume that is measured, not the actual quantity in weight.

In practice, most people just use what they have as a dry measuring cup, which tends to be a liquid one. You put in the flour, shake it then eyeball it — as generations of Americans and Canadians have now done.

Liquid measuring cups have a pour spout on them, which dry ones don’t. Many will have enclosed handles so that the cup can be hung from hooks. Pyrex ones always used to have such a handle, but around 2000 they started putting out more cramped handles that are open at one end, and so they can’t hang on a cup hook. The idea reputedly is that they can be stacked instead.

They are generally made of glass or plastic, with glass being more usual. Either will have the measurements marked off at the sides. Most glass ones are made of a heat-resistant glass such as Pyrex. Transparent plastic ones can cloud over with time, making it harder to see clearly how close the liquid you are measuring is matching up to the marks.

To accurately measure liquids, you have to raise a measuring cup to eye level or crouch down to its level on the counter. The top measurement line is always a bit down from the rim, so that when you need to measure the full amount, it won’t spill over the edges.

Very large liquid measuring cups (such as the 2 US quart / litre) can double as mixing bowls, and are sometimes referred to as “batter bowls.” 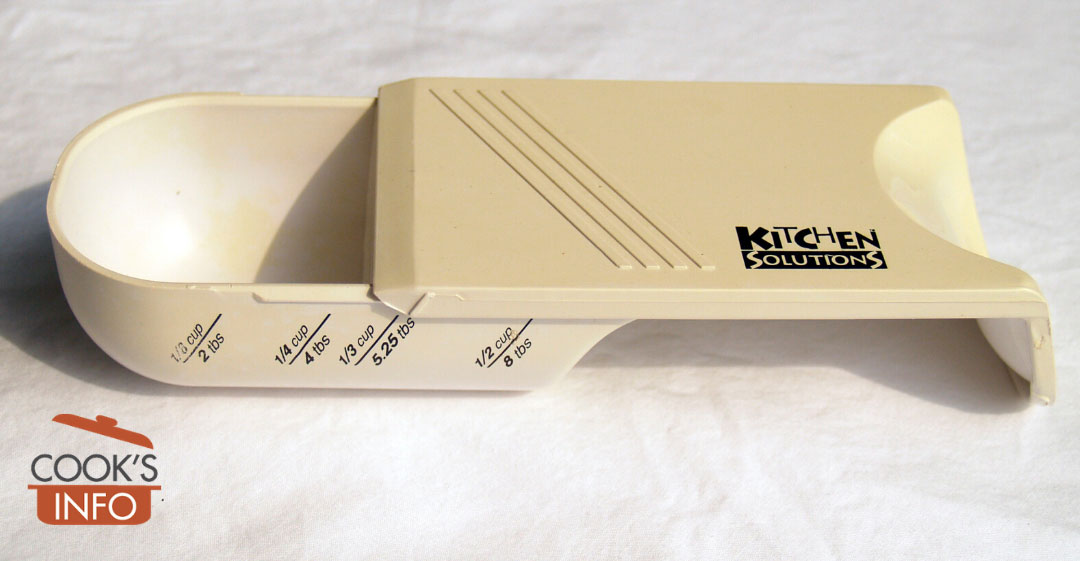 Some measuring cups are designed as “sliding bars.” You move the handle, which in turn moves a dividing compartment in the cup portion, to decrease or increase the volume of the area available to hold ingredients.

Another novel design is that of a plastic cylinder fitting snugly around a sliding tube. Called a “Measure-All® Cup”, a “Push Up Cup” or a “Wonder Cup” (yes, it is starting to sound like something else, isn’t it?), you push the tube up or down inside the cylinder to the right measurement line you want, then fill. As you add ingredients, you raise the tube to line the measuring lines up with what you have already put in, and then measure the next ingredient in. In this way, it works a bit along the same principle of taring an adjustable electronic weigh scale. This design is used for solids, or semi-liquids like honey or mustard, but not liquids. They are particularly handy for ingredients like jam, peanut butter or butter that can otherwise be hard to get out of measuring cups: you just push the tube up, forcing the ingredient out of the top.

A few measuring cups, such as those designed by OXO, are now designed in such a way that looking on them from overhead will give an accurate measure. This means you don’t have to crouch down to counter height.

These cups are actually divided in two by a slanting piece of plastic, with the half behind the plastic shut off, out of use, and on the slanted divider inside are the measurements, though measurements also on the outside. Some people feel, though, that the angles created inside the cup make it hard to scrape ingredients out.

Most measuring cups are designed for right-handed people.

Some measuring cups for those who are blind or have impaired vision have raised measuring lines on the insides of the cups, so you can feel where what you are measuring is at.

This is a method for measuring solid, “water proof” ingredients such as shortening, lard or butter that is taught in home economics classes. It is considered more accurate than trying to pack it in, then scrape it out, but it is more work.

Alternatively, shortening may be placed on the kitchen table until it softens enough to pack it accurately in the cup, or, you can pack harder shortening or butter into the cup tablespoon by tablespoon to avoid leaving large air gaps.

America calls its measuring system “English”, but the truth is, contemporary Brits tend to measure dry or solid ingredients by weight, not volume.

Brits do, though, use measuring cups for liquids. But they tend to call them “measuring jugs”, and they tend to be delineated in pints, not cups. Brits relate to “pints” (British pints of course, being 20 oz as opposed to 16 oz in the USA), and where North Americans might say “1 cup” (8 oz), Brits will say “1/2 pint” (10 oz), with the rest of the recipe being scaled accordingly, naturally. But, outside of home canning, many North Americans are losing an everyday understanding of what a pint is.

You can figure on a standard 1 cup measuring cup as being 250 ml in the United States, Canada, New Zealand and Australia.

All that being said, with all the recipes that are now flooding across the pond from North America, as well as from Australia and New Zealand, Brits are exposed now to a great many recipes calling for volume measurements of solid ingredients.

In response to the need created by these recipes, you can now buy sets of measuring cups in stores such as Tesco’s that are approaching the North American measurements for a cup. On them you see marked 1/4 cup (60 ml – Ed.: close enough), 1/3 cup (80 ml), 1/2 cup (125 ml), 1 cup (250 ml.) Nigella Lawson sells measuring cups in the exact same dimensions, shaped like tea cups, with the level line marked inside beneath the rim. Some, though, have noted that their lack of spout makes them hard to pour liquids out of, and having the level line beneath the rim makes them hard to level off dry ingredients with.

In the UK, many bread machines are shipped with cups for measuring flour, but it can be very hard otherwise to find such measuring cups there for levelling off at the top, even though bread maker machine instructions there will tell you to do so.

Breakfast cups for measurement in Britain

Informally, some older British home cooks used to refer to a “breakfast cup” for volume measurements of solids. You may see an older, home recipe call for a breakfast cup of flour. 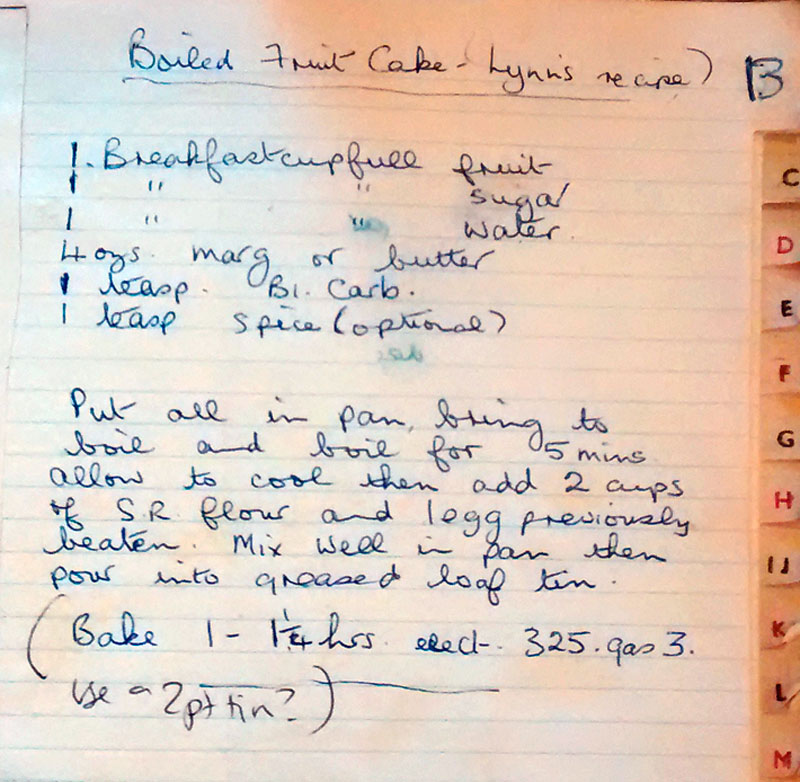 Some define this as being 10 oz in volume, half a British pint. Others wonder if the breakfast cup meant really was that large and suggest that it might have been a tea cup instead.

Nigel Slater says in response to a reader’s question:

“Q: When an old but very efficient recipe says to use a breakfast cup, what are the correct dry and liquid measurements to use in this modern age? A: A breakfast cup was the sort you might use for a large milky coffee. The measurements are very much equal to an American measuring cup. So for any recipe specifying a breakfast cup you should allow 200 ml for a full one. Obviously with dry measures it will depend what you fill it with.” [1]Slater, Nigel. Ask Nigel. Manchester: The Guardian. 24 May 2009. Accessed August 2015 at http://www.theguardian.com/lifeandstyle/2009/may/24/ask-nigel-slater-cooking-tips

Measuring cups in other countries

In the UK, they are delineated in imperial pints and ounces, and in metric.

In Canada, the US, Australia and New Zealand, they are delineated in cups and ounces, and in metric. Larger ones will have US pints and US quarts on them as well.  The cups for these countries are the same size: 8 oz / 250 ml.

In the rest of the world, generally, they are delineated in metric.

Some Mexican recipes still are given in cups (called “taza”), as in “¼ de taza de leche” (1/4 cup of milk.) Dry ingredients may even be given by Mexican recipes in cups, which is likely the American influence.

Some metric purists (usually scientists in English-speaking countries) bristle at the mention of “metric cups” or “metric teaspoons” saying that they don’t exist. And in their labs, that is correct: you’ll never see such a measure in labs that use metric.

The plain fact, however, is that home cooks do have metric measuring cups.

And two quotes from Australian government officials show that they certainly believe that a metric measuring cup exists: