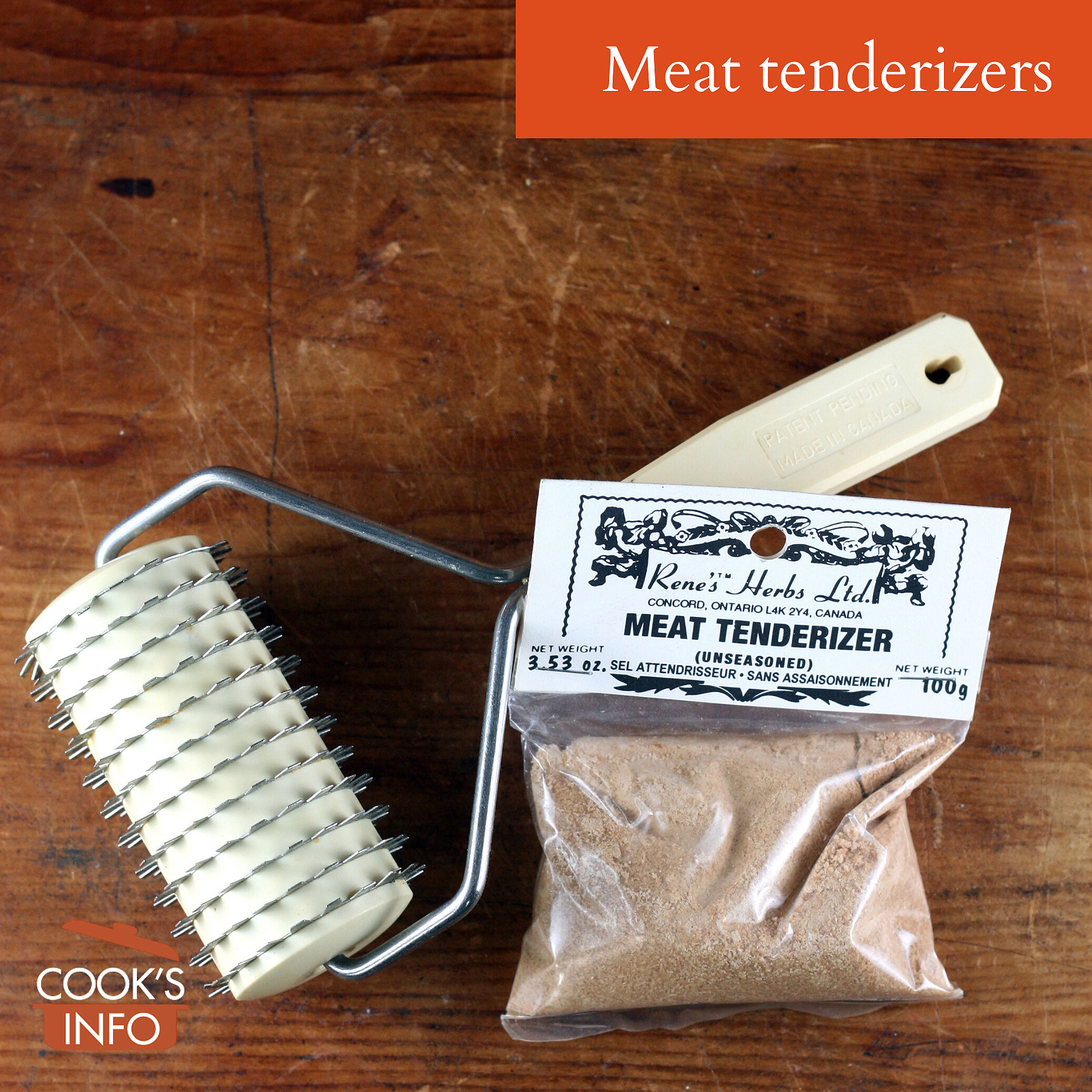 The item referred to by the term can be a chemical “tool”, or a physical one. 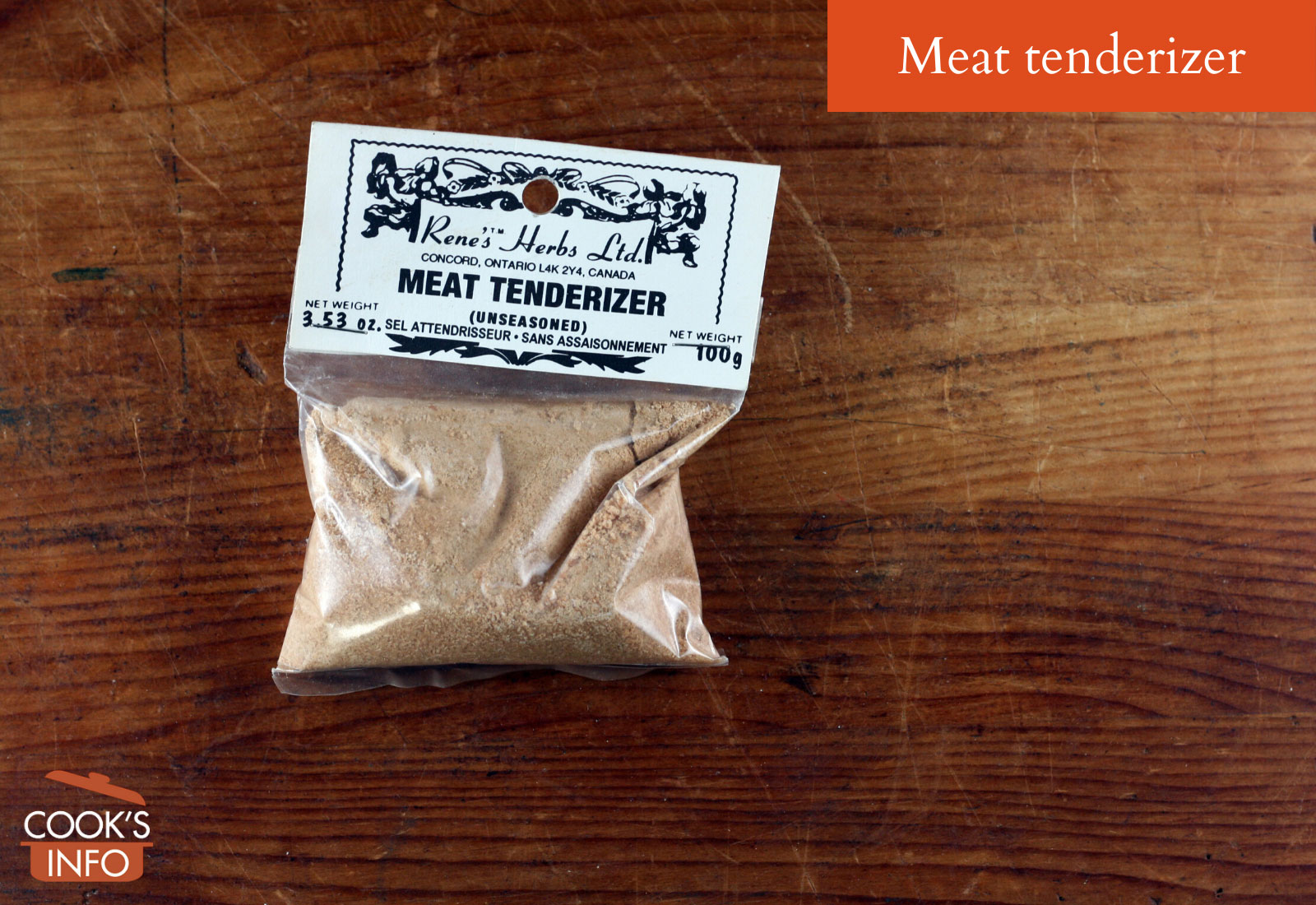 A chemical meat tenderizer will have in it enzymes that break the “peptide bonds” in protein and in connective tissue.

Different compounds, mostly all natural, are drawn on for the enzymes:

It can come in powder or liquid form. Some powders can be sprinkled directly on the meat.

Some chemical meat tenderizers, if left on the meat too long, can make the surface of the meat squidgy and unappealing.

Some cooks recommend vinegar in braising liquids to tenderize meat.

Physical meat tenderizers rely on pounding or collisions to break down the peptide bonds in meat.

Meat tumblers, typically used commercially, have spikes inside them to tenderize the meat.

Some physical meat tenderizers are a rolling cylinder attached to a handle. The cylinder is composed of a series of small blades that cut through the connective tissue. 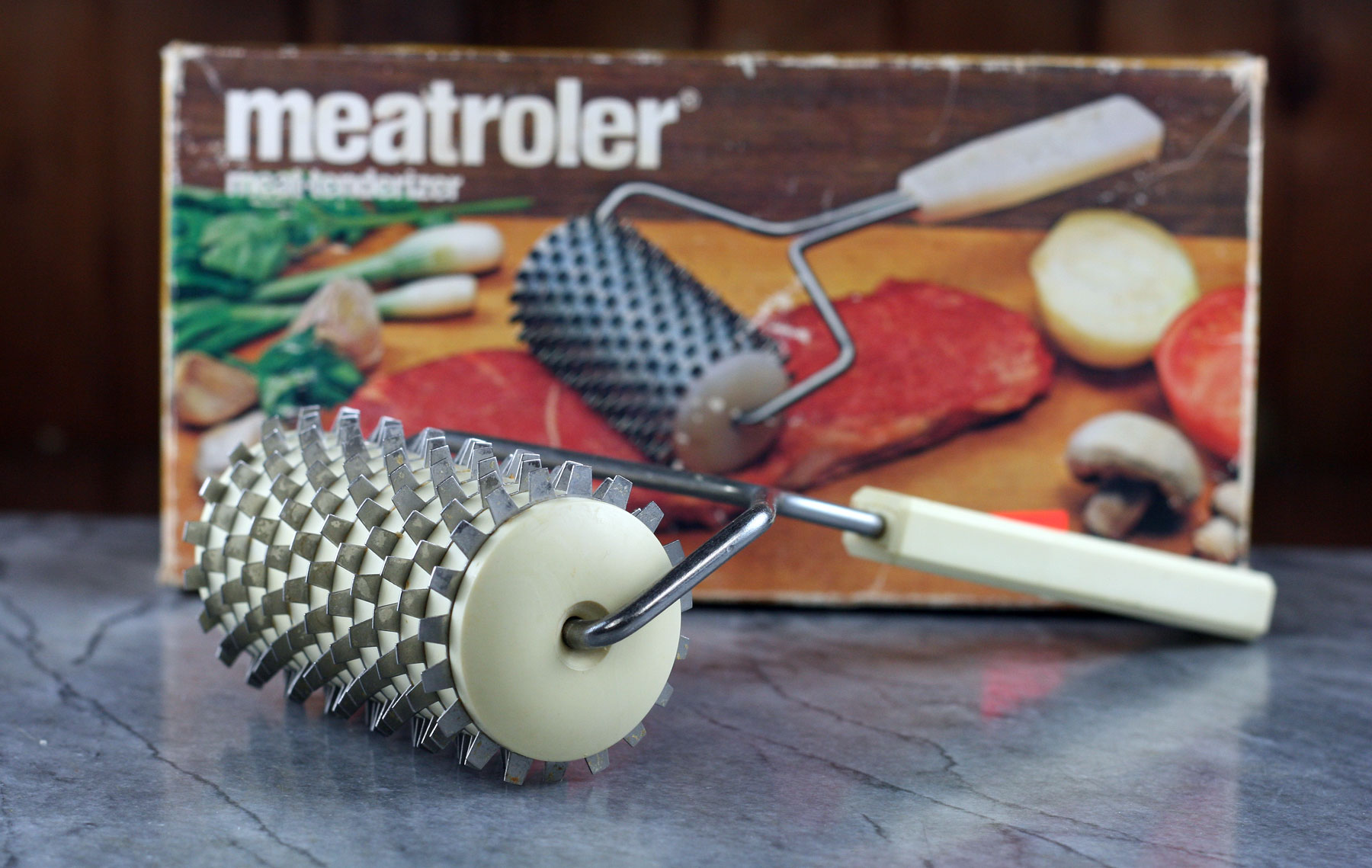 The most usual physical meat tenderizer, though, is a meat mallet, with small spikes on one face on the mallet. This is dual purpose: it can be also used to thin meat out for dishes such as schnitzel.

When pounding with a meat mallet, don’t pound in one spot so much that you create a hole in the meat.

“Tenderizers: One of the standard items in American kitchens throughout the nineteenth century was a steak beater, a wooden paddle used to pound tough meat and break its fibers, thus tenderizing it. After this came the mallets called “cubers.” Neither of these was truly a tenderizer. Each made the meat easier to cut and chew, but in so doing also gave it a somewhat masticated texture.

A genuine tenderizer did not appear until the late 1940’s, after two young men discovered a restaurateur in California who served good steaks for very little money. They learned he had a secret process for tenderizing his steaks and paid him a rather indifferent sum for the formula. This was more or less the start of a commercial meat tenderizer based on use of the papaya enzyme. It was not exactly a new idea, for the Central and South Americans had been using papaya leaves to tenderize for generations. However, it was entirely new and magical to North America, and soon the market was flooded with tenderizers of different brands and qualities. Through continued research the effectiveness of the original tenderizer has been improved far more than most of the others.

It is true that if you follow directions faithfully a tenderizer can give remarkably satisfactory results. Tenderizers are available in liquid and powdered form, seasoned and unseasoned. I myself prefer the unseasoned variety. There is even a minute marinade available for meats that accomplishes in a short time the tenderizing and seasoning that normally would require several days. Many restaurants have made fortunes by serving inferior grades of beef, tenderized and attractively cooked, to a public who could not afford the prices of steaks in fine restaurants. There is even some beef available that is tenderized before slaughtering by being fed the papaya enzyme. This meat is handled by two of the big supermarket chains.” [1]Beard, James. American Cookery. Boston, MA: Little, Brown and Company. 1972. Page 256.

This web site generates income from affiliated links and ads at no cost to you to fund continued research · Information on this site is Copyright © 2022· Feel free to cite correctly, but copying whole pages for your website is content theft and will be DCMA'd.
Tagged With: Meat Cooking Tools