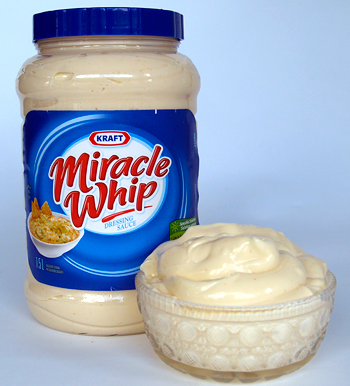 Miracle Whip is a bottled, commercial salad dressing that looks like mayonnaise. Made by Kraft, it is sweeter, tangier, and somewhat less expensive than mayonnaise.

It has been sold for over 70 years now, and has been used so widely that many people prefer it to the real thing.

In the year 2000, it was one of the top 20 brands of anything sold in North American grocery stores, so despite the disparagement it receives from foodies, someone’s using it.

Occasionally, you may see small red flecks in your Miracle Whip. These flecks are paprika.

Miracle Whip will keep refrigerated for up to 3 months after opening.

Kraft was already selling bottled mayonnaise in 1933. By 1933, though, with America at the depth of the Depression, Kraft needed something cheaper to sell for salads, which they found in Miracle Whip.

A man named “Charles Chapman” had invented an “emulsifying machine”. Kraft bought the rights to the machine from him. Mr Chapman had called the machine the “Miracle Whip”; Kraft named the product after the machine.

Kraft introduced the product at the 1933 Century of Progress Chicago World’s Fair, and began what was then one of the biggest-ever advertising campaigns for a food product (they even had Miracle Whip sponsoring a radio show.) Within 6 months, it was outselling bottled mayonnaise.

In 1933, small, medium and large-sized jars of Miracle Whip were priced 10 cents, 18 cents and 30 cents (according to ads in the Fitchburg Sentinel of Massachusetts in 1933.)

Miracle Whip was introduced to the UK market in 1967. 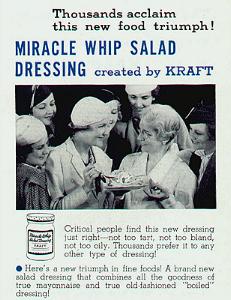 “About this time of year, you wives and mothers are sometimes puzzled by the way appetites fall off. Now, don’t waste time worrying about it; just try a change of diet. Introduce more of those healthful salads into your daily menus. And perk them up with Miracle Whip, the new type of salad dressing. From the very first mouthful, your family will delight in Miracle Whip’s utterly different flavour: not too tart, not too bland, but just right. Everybody enjoys the extra dash that Miracle Whip gives a salad. And men are especially enthusiastic about it. Why? Well, Miracle Whip is a skilful combination of two favourite flavours — old fashioned boiled salad dressings and true mayonnaise, blended to bring out the highlights of both; to create an entirely new and exciting flavour. Another reason — the Miracle Whip recipe calls for more of the costly ingredients that make the difference between fine and ordinary salad dressings. These choice ingredients are whipped to a new, velvety creaminess in the Kraft Miracle Whip beater. Try a jar of Miracle Whip tomorrow. It’s the family favourite in millions of homes. Miracle Whip is actually the largest selling brand of salad dressing in the world!” — Kraft Music Hall radio show advertisement, NBC, 27 May 1937.

In July 2011, Miracle Whip played on the “you love it or hate it” reputation that the product has and announced a “Not for Every Relationship” contest. To enter, contestants had to post a 60-second video on YouTube saying how Miracle Whip had affected their relationship, for the better or worse. The winning entry would receive $25,000 US which they could use towards the cost of a wedding — or divorce.

This web site generates income from affiliated links and ads at no cost to you to fund continued research · Information on this site is Copyright © 2022· Feel free to cite correctly, but copying whole pages for your website is content theft and will be DCMA'd.
Tagged With: American Food, Salad Dressings