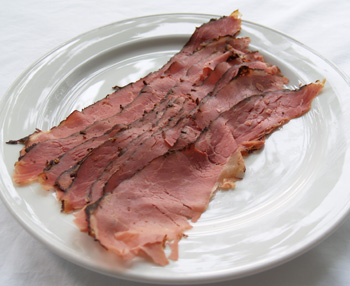 It can be thought of an either an unsmoked version of wet-cured Pastrami, or deli-style corned beef.

It is moist, and has a milder, sweeter, less spicy — some say blander — taste than pastrami. Good Montreal Smoked Meat should be tender, not chewy, and pinkish in colour. The pink colour comes from nitrates used in the cure, which convert to nitrites.

It is not at all, despite its name, a “smoked meat” in the sense that people from anywhere else in the world would think of the meaning of “smoked.” It has no resemblance to a true smoked meat. The word “smoked”, some speculate, came from a series of mistranslation from Romanian to Yiddish to Québecois and back to Yiddish. The only smoking it gets is from fat spluttering in the oven as it is baked — no more smoking than a Sunday roast beef dinner would get.

Pastrami lovers say that Montreal Smoked Meat just doesn’t have the same chutzpah as pastrami; and that to them, it even smells a bit like baloney or hot dog wieners. Some say it’s good sandwich meat, but not of the mythic proportions that some others feel compelled to want to make it into.

The meat used is beef brisket streaked with fat. Most of the beef used is imported from Alberta, in Canada.

Traditionally, the meat was dry-cured: covered in a salt and spice mix for two weeks, and turned frequently. This method is not used anymore.

The curing process used now is wet-curing, or “injection brining.” It is cheaper, and allows greater volume of meat to be processed more quickly. A needle inserted into the meat by a machine injects a spiced brine into the meat. Then the meat is rubbed with crushed peppercorns mixed with spices such as coriander, chilli powder, bay leaves, and garlic. The meat is then packed into barrels that are put into large refrigerators, and allowed to cure. The meat can be ready in about 24 hours, though some of the makers, such as Schwartz’s in Montreal, still marinate their brisket for up to 10 days.

Then, the meat is baked in a gas-fired oven for about 4 hours to cook. Though they still call this the “smoking” process, it’s actually a misleading term.

The meat is then removed from the oven, and sprayed with cold water to stop the cooking. Then it is vacuum packed for longer storage or shipping, then refrigerated, or just put in the refrigerator as is for more immediate use.

Good smoked meat needs good marbling, though diners are now demanding leaner slices, but the fat is what captures and retains the flavour.

Montreal Smoked Meat is rarely found outside Montreal, though it is now available in a few cities in Canada. (Toronto was traditionally a pastrami city instead.)

For serving, a whole piece of the meat is steamed for about 1 ½ hours to warm it again. Some people think that the steaming makes it moist, but remember, any form of heat will dry out meat eventually, and water doesn’t make meat moist, only fat does.

It is then sliced thinly against the grain to make it more tender, and served warmed, usually on unbuttered dark rye bread, as Pastrami is.

Smoked Meat Sandwiches often have at least an inch (2 ½ cm) of the meat piled up in them. In French, you ask for a “sandwich à la viande fumée” or “un smoked meat.” It is almost always served with a kosher dill pickle.

In many of the delis, you can order lean, medium or fatty slices of the meat. Beef brisket has more fat on one end than the other, so by specifying, they’ll know which part to cut it from for you. Many fans, though, say the lean is too dry.

Purists insist that the only correct beverage to go with it is a Cherry Coke.

Many fans advise coming to the delis to get your smoked meat at breakfast if you don’t want to wait outside in Montreal’s minus 40 C weather later in the day.

You can buy whole uncut pieces or sliced to take away and freeze them.

Smoked Meat was born out of the once-large Montréal Jewish community. Ben’s claims to have been the first to served Montreal Smoked Meat. As they opened in 1908, well before any of their competitors (Dunn’s Famous opened in 1927; Schwartz’s opened in 1928 by Reuben Schwartz), they may have a solid claim.

“I sat at the counter, watching the cook pul steaming chunks of glistening pink meat out of watery vats. I wondered what it was.

“Smoked meat?” asked the cook. He was speaking English! I nodded.
“Fat or lean?” he asked.
“Fat?” I said.
“Fat’s better,” he agreed, leaning over to impale a piece of meat on his fork. He set it on the wooden counter and began to carve, letting the rosy slices fall away from his knife in ribbons. He scooped them onto a piece of rye bread, slapped a mustard-slathered slice on top, and handed the sandwich across the counter. The sweet, salty pile of meat was the best thing I had ever eaten.” — Reichl, Ruth. Tender at the Bone. New York: Random House. 1999. Page 60.