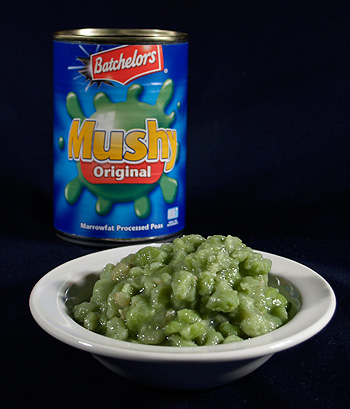 Mushy Peas is a very thick paste of peas made from dried Marrowfat peas. It is particularly popular in northern England and in Ireland.

Mushy Peas are good as a side for pork pies, or fish and chips.

At Fish and Chip shops, they are often formed into a small disk, then battered and deep-fried. Or, simply sold to you on the side to be eaten with a fork out of a small Styrofoam cup.

You can buy cans of them already made up; just heat to serve.

To make Mushy Peas from scratch, you take dried Marrowfat peas, and soak them overnight in water. Baking soda (aka bicarbonate of soda) is usually added to the soaking water, which makes the peas quite soft.

The next day, you drain the soaked peas, then simmer them in fresh water until soft, about 1 ½ to 2 hours. Season at the end of cooking with salt, pepper, and a bit of butter. Some people like to also stir in a bit of mint sauce. Packets of them may include a mint flavouring tablet.

Canned versions can be relatively high in sodium (Batchelors is 300 mg sodium per 100g / about ¼ of a can.) For lower sodium versions, make your own from scratch, omitting the baking soda (sic) in the soaking water and checking the sodium content of any mint flavouring you add if not natural from your garden. This way, you have a bit more leeway to enjoy some salt on your chips instead of hidden in your food — Mushy Peas were not originally historically high in sodium.