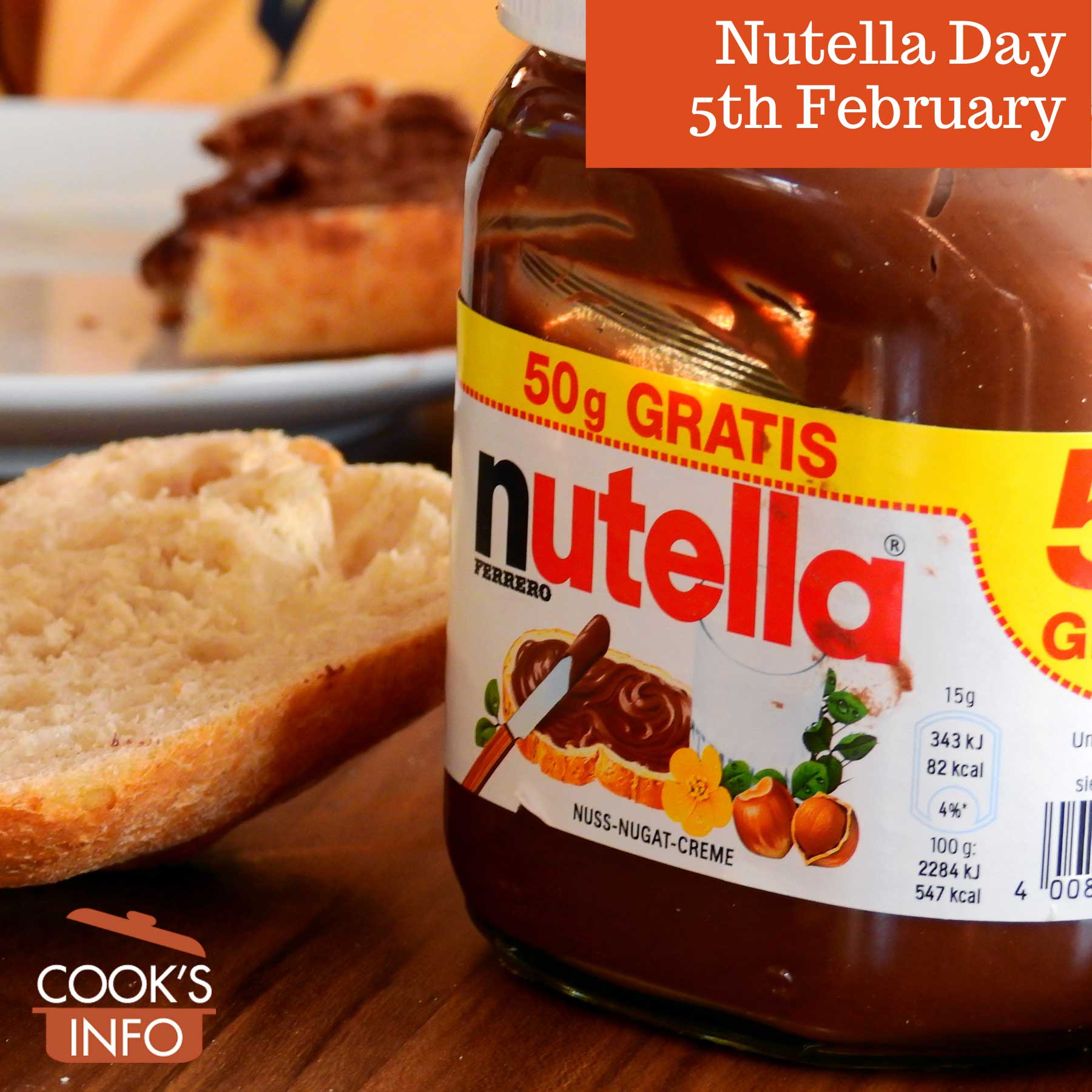 There are probably some people who don’t like the creamy combination of nuts and chocolate, but likely not many, and the 5th of February is the day to celebrate that combination in the form of the product named Nutella®.

Nutella Day is sponsored and managed by the Ferrero company, which makes Nutella.

They term it “World Nutella® Day”.

The official website for the day is at https://www.nutelladay.com/ and the official Facebook page is here: https://www.facebook.com/WorldNutellaDay/.

On this day, some restaurants will feature Nutella in special versions of desserts, in items such as pancakes, croissants, doughnuts and even in Italian pastries such as piadina and cannoli.

There are many recipes available online incorporating Nutella as one of the ingredients.

There are also copycat recipes for making your own version of a Nutella-like hazelnut-chocolate spread at home. You could make it with Splenda instead of sugar to make it healthier and reduce the calories.

The first World Nutella® Day was established by the American blogger Sara Rosso on 5th February 2007.

But the reaction of Ferrero, who owns Nutella, was a text-book case in how companies should not behave in the new age of social media:

“Most brand marketers can only dream of having a superfan who organizes a global holiday dedicated to their product. And then there’s Nutella. The chocolate-hazelnut spread’s parent company, Italy-based Ferrero has sent a cease-and-desist letter to World Nutella Day founder and organizer Sara Rosso. This Saturday, she plans to deactivate NutellaDay.com and the 7-year-old event’s social-media channels in response to the legal notice from the company. “I’ve seen the event grow from a few hundred food bloggers posting recipes to thousands of people tweeting about it, pinning recipes on Pinterest, and posting their own contributions on Facebook,” Rosso writes in a blog post about the cease and desist. “There have been songs sung about it, short films created for it, poems written for it, recipes tested for it, and photos taken for it. The cease-and-desist letter was a bit of a surprise and a disappointment, as over the years I’ve had contact and positive experiences with several employees of Ferrero, SpA, and with their public relations and brand strategy consultants.”

Ferrero [later] stopped legal action against her, saying it was “a routine procedure in defense of trademarks.” The company said it “would like to express its sincere gratitude to Sara Rosso for her passion for Nutella, which extends gratitude to all the fans of the World Nutella Day” and considers itself “lucky to have a fan of Nutella so devoted and loyal as Sara Rosso.” [1]Griner, David. Nutella Thanks Its Biggest Fan, Founder of World Nutella Day, by Sending Her a Cease and Desist. New York, NY: Adweek. 21 May 2013. Accessed July 2019 at https://www.adweek.com/creativity/nutella-thanks-its-biggest-fan-founder-world-nutella-day-sending-her-cease-and-desist-149695/

In 2015, Sara transferred World Nutella® Day and the website to Ferrero (the makers of Nutella®).

This web site generates income from affiliated links and ads at no cost to you to fund continued research · Information on this site is Copyright © 2023· Feel free to cite correctly, but copying whole pages for your website is content theft and will be DCMA'd.
Tagged With: Hazelnuts