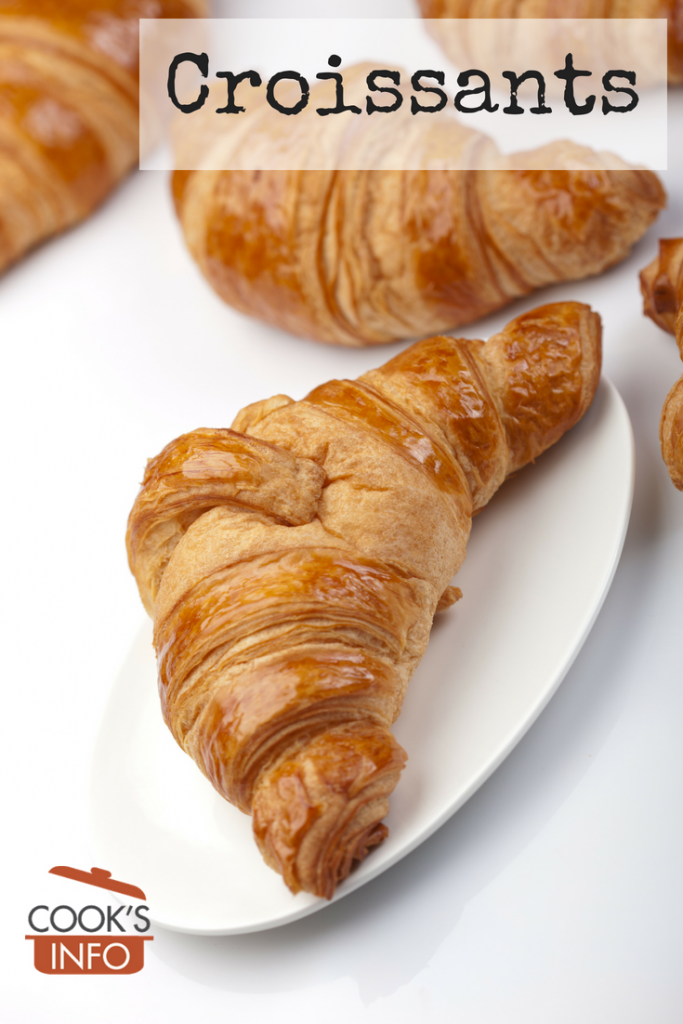 Croissants are a French bread / pastry made with a great deal of butter in the shape of a crescent, though sometimes the crescent shape is only barely perceptible.

The rising is provided both by yeast in the dough, and by numerous layers of cold fat exploding when steam hits them. The layers of fat trap both the steam and the carbon dioxide, and are pushed upwards by both.

One method of making them has you let the dough rest refrigerated overnight before incorporating the butter; a second method just asks for a rest of a few hours.

Store-made ones are now almost certainly made from frozen dough that has been made and shaped in a factory. This allows stores to bake them in-house, without the need for highly-trained pastry cooks.

They are usually purchased on weekends for breakfast, allowing 2 per person. They are eaten with jam or dipped in a bowl of coffee, but never buttered.

Though almost all croissants are made plain, sometimes they are filled. Traditional fillings inside croissants are almond paste (croissants aux amandes) and chocolate (the addition of a chocolate filling changing their name into “pain au chocolat” or “chocolatine” — the term for them is debated with some vigour.) 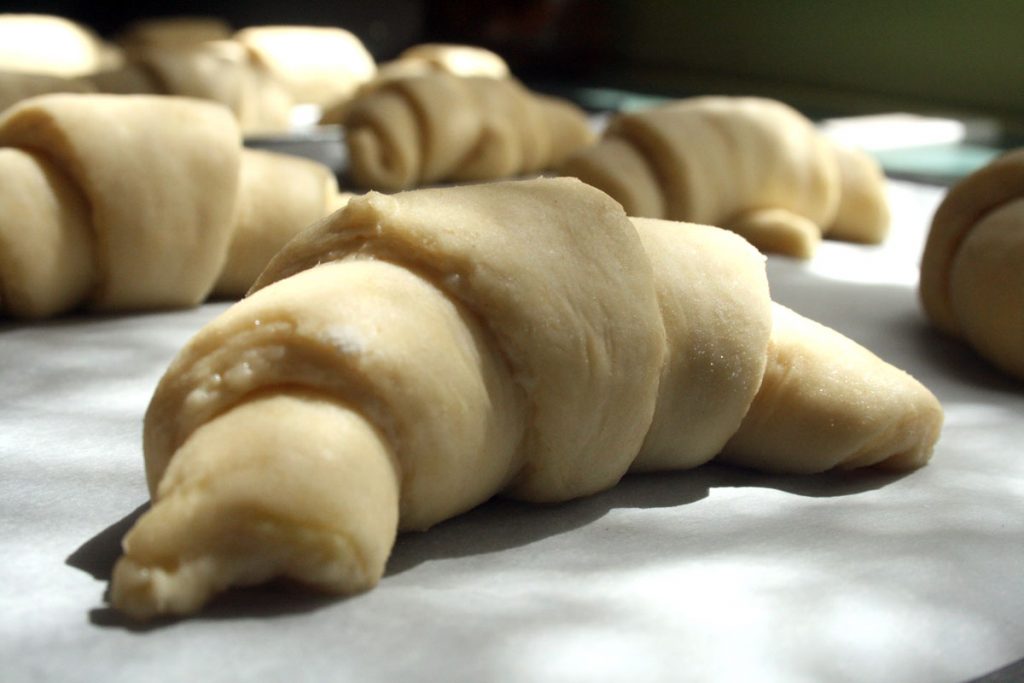 Discount all stories you’ve heard or will hear about how croissants came about that refer to :

Vienna-related stories seem to have been popularized by a man named Alfred Gottschalk, for the first edition (1938) of the Larousse Gastronomique, though he opted for the 1686 recapture of Buda as the defining event.

In 1863, Maximilien Paul Emile Littré lists, in his “Dictionnaire de la langue française Littré”, as his twelfth and final possible definition for the word croissant: “Petit pain ou petit gâteau qui a la forme d’un croissant.” (“Small bread or small cake which has the shape of a crescent.”)

Harold McGee, in his On Food And Cooking [1]On Food And Cooking, The Science and Lore of the Kitchen, page 567 cites Raymond Clavel, the French bread expert, who found evidence of them at the 1869 World Fair in Paris. They weren’t however, French — they were part of the Viennese specialties offered there, and they weren’t what we’d accept today as a good croissant. They were just crescent shaped yeast rolls, without the pounds of butter in them. Clavel goes on to say that only in 1920 did bakers in Paris modify them to add the layers and layers of butter.

Alan Davidson, the food historian, could find no printed recipe for croissants as we know them before the early days of the 1900s. [2]Oxford Companion to Food:Oxford. 1999, p. 232. 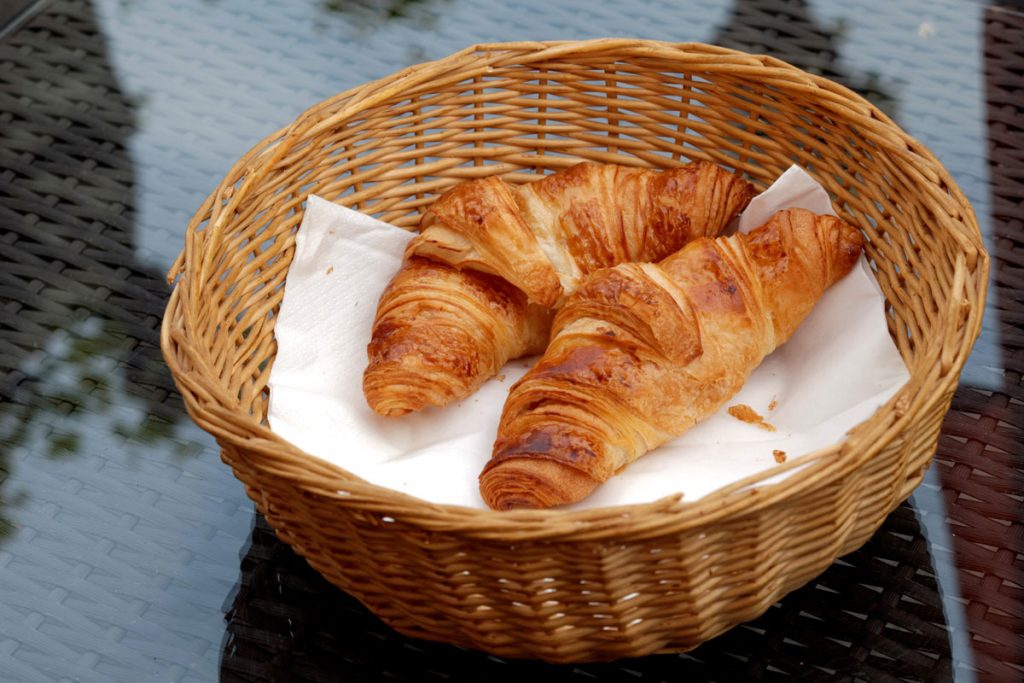 Savoury fillings such as ham and cheese, spinach and feta cheese, etc, are an innovation that began in the last few decades of the 1900s, it appears.

In 1983, Arby’s in Canada and the United States added croissants to their offerings. In the same year, Tim Horton’s Doughnut Shops in Canada began selling croissants  as well.

In Mastering the Art of French Cooking, volume 2, 1970 edition, Julia Child gives a recipe for “croissants” that begins on page 96 and ends on page 103. 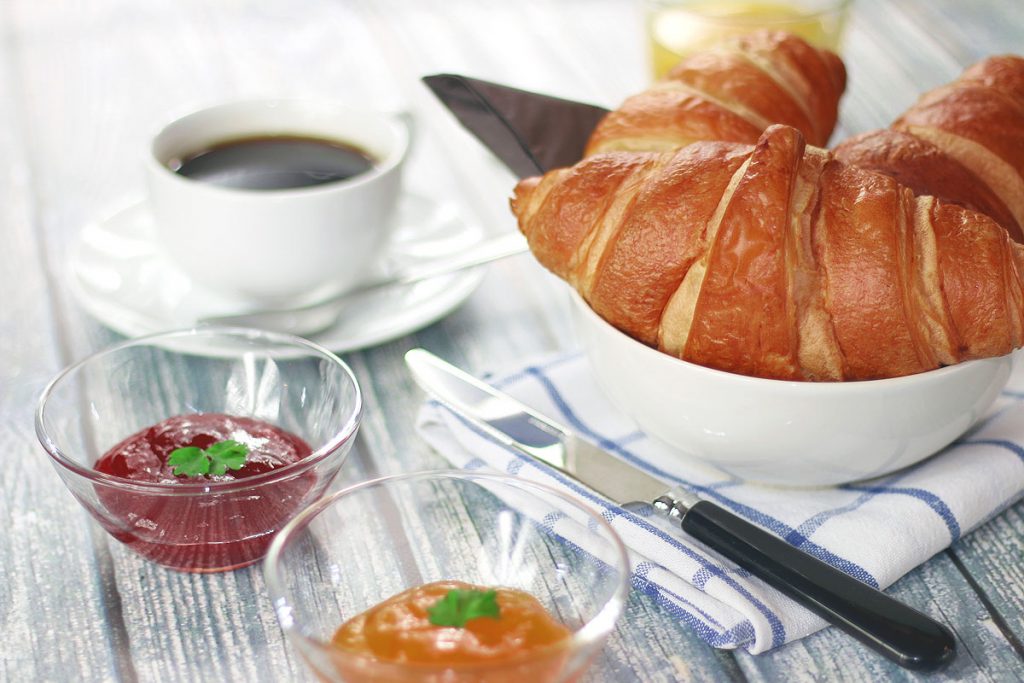 This web site generates income from affiliated links and ads at no cost to you to fund continued research · Information on this site is Copyright © 2023· Feel free to cite correctly, but copying whole pages for your website is content theft and will be DCMA'd.
Tagged With: Breakfast, French Breads, French Food