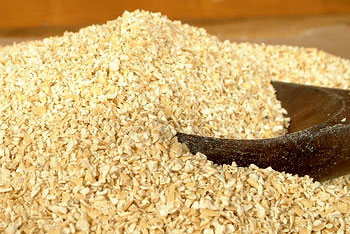 A grain of oats is covered by a husk. Humans can’t eat or digest the husks, so they have to be removed through milling.

The inside part that’s left is called the groat. The groat, in turn, is covered by a layer called the bran, inside of which there is the oat germ and the starch. The bran is usually removed from the groat and sold separately. This not only helps the remaining oat to store longer without spoiling, it provides a separate product to sell.

If cooking for a cooked cereal, cook in boiling water for 2 minutes (though recipes usually have you cook it with other ingredients.)

Oat bran is a very tasty added ingredient to breads and muffins. It adds a layer of texture and an oaty taste.

A study published in the August 2011 issue of the Journal of the American Medical Association would indicate that oat bran may be able to reduce cholesterol. The clinical research was led by David Jenkins, director of the Risk Factor Modification Centre at St. Michael’s Hospital in Toronto, Canada. Apparently foods such as oats (and oat bran) nuts, soy protein, barley, etc, contain viscous (sticky) fibre, which traps dietary cholesterol and fat in your digestive system and facilitates their passing through and out. People in the controlled study group experienced an LDL cholesterol drop up to 13 %.

The oils in bran go can rancid, especially when stored in warm temperatures. Store in sealed container in refrigerator for up to a year.