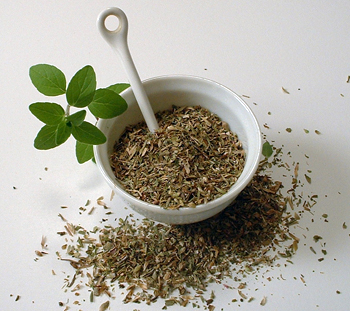 Oregano is an herb that grows as a small shrub reaching up to 2 feet (60 cm) tall. It propagates through its roots. The bush will produce small white flowers in the fall.

Quite hardy, it can survive below freezing temperatures for a short time, but in northern gardens it won’t survive the prolonged winter. You will need to replant some each spring.

The Oregano leaf is an essential ingredient for many types of Italian cuisine, particularly dishes with meat in them. It has a flavour and aroma similar to marjoram, only stronger.

Oregano is very strong when dried, less strong when fresh. Some feel the flavour improves with drying. Dried Oregano develops more flavour with long, slow cooking — thus it does well in tomato sauces which are simmered.

Marjoram has a similar taste, though milder and sweeter. You can also try thyme or basil instead.

One tablespoon of chopped fresh Oregano contains as many anti-oxidants as one apple. Many cough remedies contain thymol, which is an active component in Oregano (and thyme). 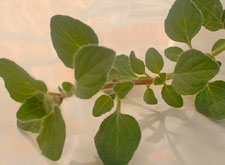 Oregano is native to the Mediterranean, particularly Asia Minor (areas such as Greece and Turkey), Italy, and the Balkan peninsula.

Oregano was used by Greeks and Romans. Pliny thought it was a good treatment for scorpion and spider bites. Colonists introduced it to North America, but it really took off in North America with the arrival of Italian immigrants — and pizza.

Greek mythology says Aphrodite created Oregano as a symbol of great happiness. Greeks would give their bridal couples crowns of Oregano (don’t try getting away with this as presents at today’s Greek weddings).

Name comes from the Ancient Greek, meaning “mountain brightness” or “mountain joy”. “Oros” in Greek meant mountain, and “ganos” meant joy, so the name literally means “joy of the mountains”.