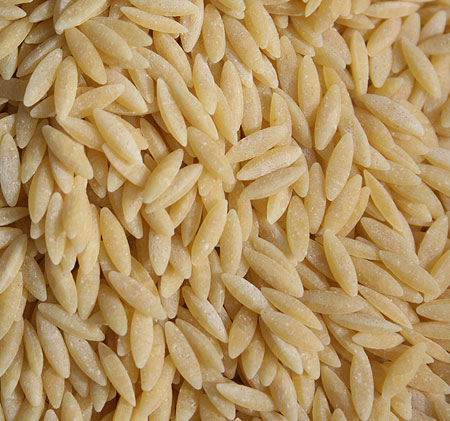 Orzo is an Italian dried pasta. Each piece of the pasta is the size and shape of an unprocessed grain of barley, which is what “orzo” means in Italian, “barley.” [1]

The pasta is an off-white colour.

Traditionally, orzo is used in soups or in chilled salads, or as a bed for roasted meats. Now, outside Italy, it’s being pressed into service in many non-traditional ways. It’s being used in creamy risotto-like dishes, baked casseroles, pilaf-like dishes, as a stuffing for baked peppers and baked tomatoes, as a stuffing for fresh items such as avocado halves, and in creamy, chowder-like soups. Mexican and Tex-Mex style recipes are even appearing for it.

Orzo is made from wheat flour. Some brands are made from durum semolina wheat. These retain their shape and “al dente” quality better. Other brands are made from soft-wheat flours. These tend to “dissolve” more like risotto rice, giving off starch to thicken a dish. Both types have their uses, depending on whether you need a fluffy rice-like quality (for a pilaf or for a salad), or need more of the starch to dissolve into the dish to produce a creamier effect.

There are some gluten-free varieties of orzo made from lentil flour, quinoa flour, etc.

In Greece, orzo is called “kritharáki” meaning “little barley.” In Greek cooking, it’s used for salads and soups but also for pilafs. A popular Greek brand is Misko.

In Turkey, orzo are called “arpa şehriye (meaning “songbird tongue”) and are used in soups and pilafs.

Bring 500 ml (1/2 quart / 2 cups) salted water to a boil. Add in 1 cup of orzo, simmer for 10 minutes, test for doneness to your taste, drain. Use as directed in recipe for salads, or serve simply with butter and parmesan on it.

If the orzo you have is not made from durum wheat and you want al dente, reduce cooking time to 7 to 8 minutes.

For use in soups, etc, follow cooking directions in recipe. When using in soups, bear in mind that it will swell up to about 4 times its size. As a rough guide, try no more than around 50g (1/4 cup) of dry orzo per 2 litres (2 quarts / 8 cups of soup) being made, the reason being that 100g (1/2 cup) of dry orzo for that quantity of soup would start to take over the soup.

Orzo is not rice, so don’t try to cook it in a rice steamer.

“Orzo” in Italian means “barley”, from the Latin for barley “hordeum.”

[1] An unprocessed grain of barley has more the shape of a grain of rice. No one sees that barley shape anymore; as consumers, we only see the more rounded shapes of pearl and pot barley, etc, after processing, which does not look like the shape of orzo pasta. Because of this, most food writers compare its size and shape to a grain of rice despite its “barley” name. In some parts of Italy, orzo is called “risoni”, meaning “big rice.”

Tagged With: Pasta for Salads