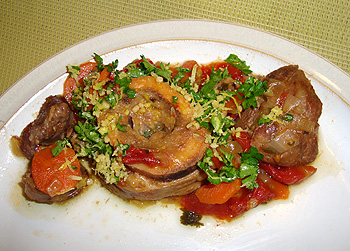 Contents hide
Ossobuco is a northern Italian dish, which literally means “hollow bone.” In English, the name is more usually translated into something like “Braised Veal Shanks”, given that something called “Hollow Bone” wouldn’t necessarily overwhelm restaurant kitchens with orders.

The dish is essentially veal shanks braised with onions and tomato, served on a bed of risotto, and sprinkled with a garnish called “gremolata.” Some speculate that this could possibly be the only dish in Italy where a risotto is served with something else, instead of on its own as a separate course.

For Ossobuco, the shank is sliced thickly horizontally through the shank bone. Ideally, the slices are 1 ½ inches (4 cm) thick, so they’ll cook evenly.

The dish has a rich sauce that comes from the marrow in the bones. For many people, in fact, the bone marrow inside the shank bones is the highlight of the dish. In Milan, there’s even a special fork to get the marrow out of the bones. The Milanese call this spoon “Agent di tass”, meaning literally “tax collector” — as in, get everything.

This was essentially once a peasant dish that has become so popular that veal shank is now incredibly expensive. In North America and in Britain, it’s expensive, and hard to find. Even in Italy, veal shank is so expensive now that butchers have come up with a substitute. They cut turkey legs & thighs crosswise through the bone so that you end up with thick leg slices with the bone running through the middle, and people use that now for “ossobuco di tacchino”, “tacchino” meaning “turkey.”

You can also use beef shank slices, which are more affordable than veal ones, but you do end up with a somewhat stronger flavour.

The traditional version of Ossobuco is now called “ossobuco in bianco” (“bianco” meaning white), to distinguish it from more modern versions. In this traditional version, there is no tomato or tomato paste (tomatoes being a “recent” New World vegetable), and a few anchovies are used instead of salt, salt being very expensive throughout most of Italy’s history owing to salt taxes. Seasonings include cinnamon, allspice, and bay leaf (aka laurel.)

Modern versions use tomato or tomato paste, and still use cinnamon, allspice, and bay leaf as seasoning. Onion, carrot and celery have been added to make a “soffritto”, the base now for many modern Italian dishes. Some variations toss in kalamata olives, too.

To make Ossobuco in the modern fashion, in general, you lightly sauté minced onion, carrot and celery in butter (butter, not olive oil — this being a Northern Italian recipe.) You then dredge the shank slices in flour, add them to the pan, and sauté them until brown. Then you add white wine, and any other liquid called for, seasoning, and tomatoes or tomato paste. Cover the pan, and cook at a very low simmer until the meat comes off the bones easily.

When you sprinkle the gremolata garnish on Ossobuco on your plate, the ingredients in the gremolata release their aromas as the heat from the meat hits them.

This web site generates income from affiliated links and ads at no cost to you to fund continued research · Information on this site is Copyright © 2022· Feel free to cite correctly, but copying whole pages for your website is content theft and will be DCMA'd.
Tagged With: Beef Dishes