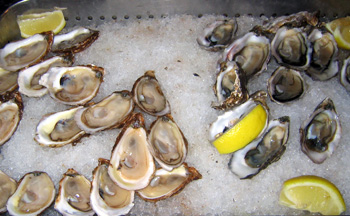 Oysters are bivalves, which means they have two shells, like clams and mussels. They are found in both the Atlantic and the Pacific.

Oysters are generally male in their first year of life, switching to female in their second year. After that, they may go back and forth between being male and female. They may change sex up to four times a year.

You can buy live, bottled or canned Oysters. When buying live Oysters, choose Oysters with wet shells that have no cracks or chips in the shells. The shells should be either tightly closed, or if they are open a little bit, they should clamp shut when you tap them to see if anyone is home. Oysters, in fact, may be the only food eaten in Western culture that is often eaten still alive.

Live Oysters are, like other seafood, said to be best in months that have “r’s” in them — in English, at least.

The taste and texture of Oysters depends on the species, and where they come come. For instance, Rock Oysters have softer flesh; Native Oysters are meatier, and have a different taste.

Some Pacific Oysters can be up to a foot long (30 cm); these are called “Pacific” or “Japanese” Oysters. Others from the Pacific include those from Pacific Northwest. These are smaller, about 1 ½ inches across (3 ½ cm), and are known generally as “Olympia Oysters.” The bigger Pacific Oysters are cut up and cooked; the small ones can be eaten raw or cooked.

Oyster farming is now a big business on the Pacific coast of North America in Washington State and in British Columbia. The farms are located out where rivers and creeks flow into the sea, where sea water mingles with fresh water as tides rise and fall. The Oysters are bought when very small, and allowed to grow in bags made of mesh wire put on racks to keep them just off the sea bottom. Such farmed Oysters are now being named for the farm they were raised in. Even though they are all basically the same type of Oyster (Pacific Oyster), connoisseurs (and coincidentally, marketers) say the Oysters will taste different from one farm to the next because the water will vary, as well the beds and the type of plankton and nutrients that were available to the Oysters. Certain farm names can command a price premium.

Oysters from the Atlantic tend to be 3 to 5 inches long (7.5 to 13 cm.) In North America, Atlantic Oysters are known by where they come from, with names such as Apalachicola, Blue Point, Malpeques and Wellfleet. In Britain, popular Oyster types are “Rock” and “Flat” (aka “native”.)

Scrub the shells with a good, stuff brush and rinse under running water. Discard ones that are wide open or won’t shut.

Removing an Oyster from its shell is called “shucking” the Oyster. This is the next step. Hold the Oyster in a tea towel to protect your hand, with the pointed end of the Oyster towards you and with the flattest side facing up. Insert the point of a knife where the two halves of the shell join, and wiggle it in firmly. Then rotate the knife until the two halves come apart. Run the knife around to cut through all around the two halves.

The flesh will be in the lower part of the shell in a small pool of liquid that can be clear, light grey or a bit whitish. The Oyster meat is most often cream-coloured, but this will vary by type of Oyster. Discard the top shell, and cut the meat free from the bottom shell.

If you’re cooking Oysters, they are done when the meat becomes opaque. The edges may curl up a bit, but if the meat starts to shrink, you are overcooking them.

To barbeque Oysters in the shell, scrub the shells, and place on hot barbeque rack until shells open (about 3 minutes). Discard any Oysters whose shells do not open.

If you are serving Oysters as a starter, count on at least 6 per person. To serve as a meal, allow 6 to 12 per person.

If you eat raw Oysters, you need to make sure that your immune system is not comprised in any way, or you could be vulnerable to a bacteria that can be in Oysters, called “vibio”, which can cause illness. You can kill the bacteria by thoroughly cooking the Oysters — just steaming them won’t necessarily provide enough heat to kill the bacteria. The Oyster meat should look cooked (opaque.)

To freeze live Oysters, wash and shuck them first. Pack them in their own juice in tightly-sealed bags or containers, and freeze for up to 3 months.

Pacific Olympia Oysters almost disappeared during the 20th century, owing to pollution and overharvesting. In the late 1990s, efforts were begun in Washington State to restore the population.

Aphrodite, the goddess of love, emerged from an oyster shell.

The Irish writer Jonathan Swift (1667 – 1745), in his poem “Verses made for women who cry apples”, wrote the following about oysters:

“Charming Oysters I cry,
My Masters, come buy.
So plump and so fresh,
So sweet is their flesh,
No Colchester Oyster
Is sweeter and moister;
Your Stomach they settle,
And rouse up your Mettle;
They’ll make you a Dad
Of a Lass or a Lad;
And Madam your Wife
They’ll please to the Life;
Be she barren, be she old,
Be she slut, or be she Scold,
Eat my Oysters, and lie near her,
She’ll be fruitful never fear her.” [1]Verses for women who cry apples. Swift, Jonathan. Miscellanies: The Fourteenth Volume. Second Edition. London, England: Hitch, Davis, Dodsley and Bowyer. 1751. Page 207.

“As I ate the Oysters with their strong taste of the sea and their faint metallic taste that the cold white wine washed away, leaving only the sea taste and the succulent texture, and as I drank their cold liquid from each shell and washed it down with the crisp taste of the wine, I lost the empty feeling and began to be happy, and to make plans.” — Ernest Hemingway, in “A Movable Feast.”

“Before I was born my mother was in great agony of spirit and in a tragic situation. She could take no food except iced Oysters and champagne. If people ask me when I began to dance, I reply, ‘In my mother’s womb, probably as a result of the Oysters and champagne — the food of Aphrodite.'” — Isadora Duncan (Dancer, 1878 – 1927)

“Oysters are more beautiful than any religion…There’s nothing in Christianity or Buddhism that quite matches the sympathetic unselfishness of an oyster.” — H.H. Munro (1870 – 1916. The Chronicles of Clovis, 1911.)

“Oysters were legendary as a poor man’s food. In The Pickwick Papers, Sam Weller says sagely, ‘poverty and oysters always seem to go together… the poorer a place is, the greater call there seems to be for oysters… Blessed if I don’t think that ven a man’s wery poor, he rushes out of his lodgings, and eats oysters in reg’lar desperation.’ Many costers did a daily round selling fruit and vegetables, later adding another round of oysters, purchasing a bushel at a time and going to poor neighbourhoods. After 6 p.m., when workers were walking home, the sellers shifted to the main streets to sell them a snack at the end of their workday. Alfred Bennett remembered many improvised corner stalls in his childhood, selling four oysters for a penny, ‘opened, vinagared and peppered’. Monday was the best day, when workers still had their wages from Saturday; as the week progressed, business steadily declined.” — Flanders, Judith. The Victorian City. London: Atlantic Books. 2012. Page 283, talking about London in the 1850s to 1860s.

“Oysters were sold on the street during the day, but at night oyster houses came into their own, after the dancing saloons closed between two and four in the morning, opening when ordinary hard-working people were going to bed…. In the 1850s, the oyster houses in the West End were scattered around….close to the theatres and other late-night locations… In the 1820s, the oyster houses had been designed mostly as retail outlets, looking very much like fishmongers, with either plate-glass windows revealing trays of oysters, or with an open hatch to the street and a slab for displaying oysters and other food to passers-by. By the 1850s and 1860s, the ‘best shell fish shop in the metropolis’ was Scott’s Oyster House, at the north end of the Haymarket, which had a counter at the front and behind it a range of shellfish: lobster, prawns, crabs, mussels and periwinkles… customers either took the oysters away to eat elsewhere, stood at the counter and ate them then and there, or went to the back room, where ‘clerks, swells, men about town, Englishmen and foreigners’ all mixed. Upstairs was ‘more select’, as well as the haunt of women supposedly of dubious reputations. Some oyster houses were simpler: ‘lobsters, crabs, pickled and kippered salmon, bloaters, and dried sprats’ were sold to customers who stood at the counter, eating and drinking and then ‘contentedly wip[ing] their hands on the jack-towel on its roller afterwards'” — Flanders, Judith. The Victorian City. London: Atlantic Books. 2012. Page 289 – 290, discussing London in the mid-1800s.

This web site generates income from affiliated links and ads at no cost to you to fund continued research · Information on this site is Copyright © 2023· Feel free to cite correctly, but copying whole pages for your website is content theft and will be DCMA'd.
Tagged With: Ancient Greece, Bivalves