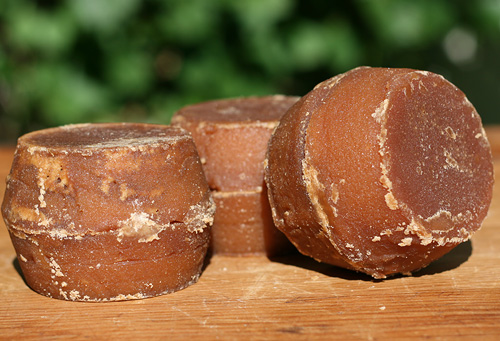 Panela is unrefined sugar with a high molasses content.

Non-centrifugal means are used to produce the sugar. Sugar cane juice is just evaporated over heat until it forms a syrup called “miel” (sic), then it is boiled and stirred until it crystallizes and forms “panela.”

Panela is sold in squat blocks. The syrup can also be used to make Piloncillo with.

Sometimes in the Andes, Panela is made from concentrated juice from Yacon.

When crushed up, Panela is called “polvo.”

You have to shave it or grate it before using.

Grate and use it as you would brown sugar, or hack off pieces and melt in water to make a syrup.

A food processor does a nice job of turning a chunk into fluffy shavings.

Or, to soften the whole block, put it in the microwave for about 15 seconds. After that time, press down on the block to see if it crumbles. Zap in further increments of 10 seconds until it will crumble. Don’t microwave for long intervals or it will melt.

This web site generates income from affiliated links and ads at no cost to you to fund continued research · Information on this site is Copyright © 2022· Feel free to cite correctly, but copying whole pages for your website is content theft and will be DCMA'd.
Tagged With: Brown Sugar, Latin American Food