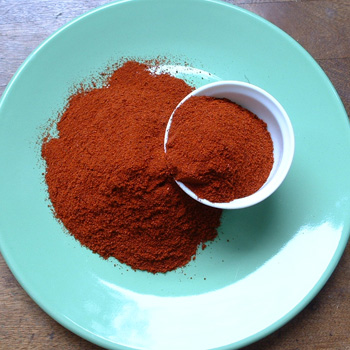 The pepper plants grow up to 60 cm (2 feet) tall and produce green or yellow pods as “fruit” which turn red as they ripen. After being harvested, they are left out in the sun to dry, or factory dried. They are smaller, longer and more pointed than regular peppers and can be very hot by European standards (though not by Mexican.)

Fresh paprika does have taste and some mild heat to it. Many people in North America grew up considering paprika to be something used to just add visual interest to a dish, with sprinkles of red powder, rather than any taste. That is because their parents had tins or bottles of paprika so old that all taste had long since gone, leaving the spice just as coloured dust, essentially.

The red flecks that you sometimes see in Miracle Whip are Paprika. 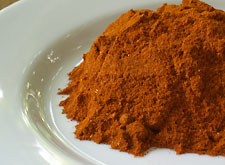 Use Paprika as a garnish on potato salad, devilled eggs — any kind of pale food.

Paprika contains small amounts of natural sugar (about 6%) from the pepper it was made from. If heating Paprika on its own in a frying pan, such as when starting a curry, etc, heat it for no more than a few seconds or the sugar can turn bitter.

They brought Paprika pepper plants to Hungary in the 1500s and 1600s, to be used as a medicine.

The peppers were treated in this way, and as a garden ornamental, in Hungary until about the 1820s, by which time Paprika had become so popular in Hungarian kitchens that it displaced use of previously popular spices such as black pepper and ginger.

In Hungary, to reduce the piquancy of the taste, the veins and seeds of the peppers (which is where the pungency would be) were removed after the harvesting of the peppers, at first by hand, and then later in a roller-frame machine process developed by János and Balázs Pálffy in 1859. [1]

The Kotányi paprika mills were founded by Janos Kotányi in Szeged in 1881.

In the 1930s, Jenő Horváth working with Ernő Obermayer at Pepper Research Institute of Kalocsa developed sweet strains of peppers with no heat in the veins or seeds; these strains are widely used by Hungarian growers today. [2] The veins and seeds don’t need to be removed.

In the 1950s and 1960s in North American kitchens, paprika was considered quite adventuresome for its heat. It has long since been replaced by Mexican spices in the category.

This web site generates income from affiliated links and ads at no cost to you to fund continued research · Information on this site is Copyright © 2022· Feel free to cite correctly, but copying whole pages for your website is content theft and will be DCMA'd.
Tagged With: Chile Peppers