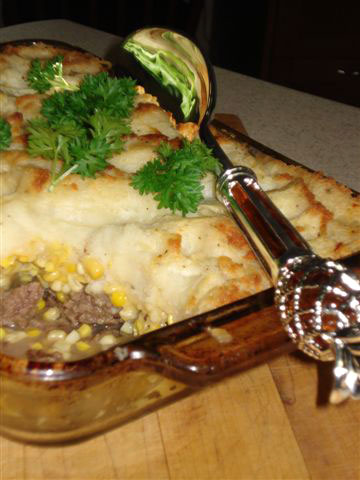 Contents hide
Pâté Chinois is a Québécois dish, similar to cottage pie, shepherd’s pie or the French of “hachis Parmentier.”

It is a baked meat dish that consists of a layer of ground beef on the bottom of the dish, a middle layer of corn (whole or creamed, some like a mixture), and mashed potato on top. The beef can be pepped up with onion, diced peppers, etc. Many say it is best with cream corn, as the dish can be dry with whole corn. Some like a sprinkle of paprika on top for colour.

Beyond that, there are a zillion suggested ways now to fancy it up now. Some make it vegetarian, some add a Mexican twist, some put half-cooked cauliflower on the top with the potato to reduce the carbohydrates, some sneak grated cheese in the middle. But, aside from when you are deliberately going for a Mexican dish, the dish should not really be all that spiced up beyond salt and pepper. It should be a simple dish.

It is almost obligatory to serve it with tomato ketchup, though some prefer a condiment with more pep to it, like a chow-chow.

Pâté Chinois is now considered a traditional Québécois dish. In November 2007, the Montréal newspaper, Le Devoir, surveyed around 500 people asking what is the national dish of Québéc. The result was pâté chinois, with pouding chômeur the runner-up. Both are comfort foods, eaten by all levels of society, in all regions of Québéc, and omnipresent in cafeterias everywhere.

There is no real explanation for the name “Pâté Chinois.” You will hear two explanations, both of which you can dismiss. The first is that it was first made by Chinese labourers working on the Canadian Pacific railway in the 1880s. The second is that it was named after the town of South China in Maine, at a time in the late 1800s when people went there to work.

In fact, printed recipes for Pâté Chinois only started to appear in the 1920s. In the 1920s, Pâté Chinois was a layer of rice, a layer of ground beef, and a top layer of rice. [1] Over the next decade or two, the rice got swapped out for potato, likely influenced by Shepherd’s Pie. No one is certain how the creamed corn got in, but it seems to have happened in the 30s or 40s. 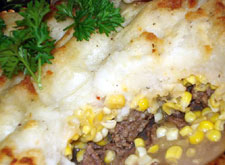 “Chinese Pie” of the same description was a staple on school menus in Massachusetts and Maine throughout the 1950s and 1960s.

“This prisoner said the food is “terrible, crummy.” He told of “mush for breakfast, bread and a few pieces of sausage for dinner and not much better for supper.” The Sunday rioting broke out when “Chinese pie” was served. It’s “a pie with dirty old potatoes, a little bit of meat and a couple of pieces of corn” and was served “every Sunday.” — Convicts Subdued In Quebec. The Lethbridge Herald. Lethbridge, Alberta. 6 May 1952. Page 1.

One of the FLQ kidnappers, Jacques Lanctôt, made pâté chinois for James Cross (1921 – ), the British senior Trade Commissioner in Montreal, while he was held captive during the October to December 1970 kidnappings in Montreal. The pâté chinois that Lanctôt made was his mother’s recipe, which called for whole corn niblets instead of creamed corn. Lanctôt served it with ketchup and slices of Weston’s white bread.

Here is what James Cross recalls: “Food usually consisted of toast and coffee in the morning, two pieces of toast, one with peanut butter. In the evening there was some sort of a mess, sometimes soup sometimes a Chinese meal or some sort of mess up.” — James Cross. [2]

The 1990 TV series, La Petite vie, had a character, Thérèse, who repeatedly muddled up how to make a pâté chinois, even one time making the layers side by side instead of on top of each other. To help her remember, other characters gave her the expression :« steak, blé d’Inde, patates » Now that expression has entered the national consciousness in Québéc, it means you are talking to someone who is a little slow.

«La grande dégustation de pâté chinois», a cooking contest for pâté chinois versions, is held every March at the Shawinigan South golf club in the Mauricie area of Québéc.

[2] Taped memoir of James Cross’s experiences as Senior Trade Commissioner and head of the British Government office in Montreal in 1968-70 and his kidnapping in 1970 by a terrorist group, the FLQ. Page 9.