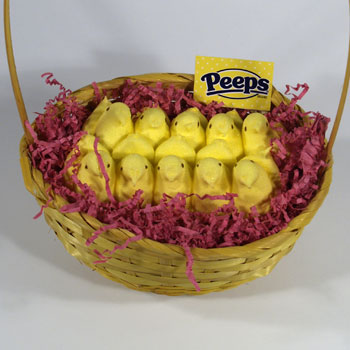 Contents hide
Peeps® are a candy made of marshmallow and coated sugar by the Just Born company of Bethlehem, Pennsylvania.

Ingredients include sucrose, fructose, corn syrup, gelatin and carnauba wax. They come in varying shapes, with the best known ones being chick-shaped. It’s the eyes on the chicks that are made of carnauba wax. The chick Peeps are not moulded; they are extruded through a nozzle. During high season, the company can pump out 3,800 Peeps a minute (2005 figures.)

Five colours are available. In rank of popularity: yellow, pink, violet (aka lavender), blue, and white. The violet colour was added in 1997, the blue in 1998. All colours taste the same, though some people swear they detect a difference.

The chick Peeps are traditional now in America at Easter, though bunnies are also made for the season. The company starts making them in the fall for Easter the next spring. In 1999 they started making Peeps Eggs for Easter that are white with coloured specks on them. The eggs do have more of a vanilla taste than other Peeps. The eggs are sold in packages of 9.

Peeps are also being made now for Valentine’s Day, Hallowe’en, and Christmas. The hearts for Valentines Day are made in Strawberry Red, White Vanilla, and Pink. For Hallowe’en, the shapes are Cats (Spooky and Cocoa), Pumpkins and Ghosts. For Christmas, they make “Cutouts”, Snowmen and Christmas trees.

Despite all the variety the classic shape of chick Peeps is still the best seller.

Some people prefer their Peeps stale, because they get crunchy. Some like them frozen. Some even use them as pizza topping. Some people like to roast them over a fire. Most people eat more than 1 at a time, up to 5. Sacramento, California holds an annual “Peep Off”, in which contestants vie to see who can eat the most Peeps in 30 minutes.

Just Born also sell kits with both the moulds and the Peep mix, and refill mixes, so that fans can even make their own at home. And yes, there is a fan club.

Peeps are not kosher for Passover. 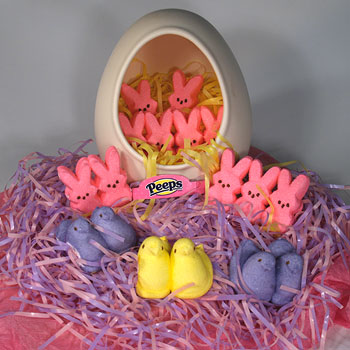 Peeps were created in the 1920s by the R. E. Rodda Candy Company of Lancaster, Pennsylvania, USA. At the time, the company made candies such as jelly beans as well. Rodda made the Peeps by hand, squeezing the chicks out from tubes. A bit later, they introduced eggs as well.

In 1953, Rodda was bought out by the Just Born company, founded in 1932 by Sam Born [1]. The production of Peeps was moved to Bethlehem, Pennsylvania. Amongst the candies made by their new acquisition, the Just Born people saw the most potential in these yellow chicks called Peeps. In 1954, they began mechanizing the production process.

In the 1960s, they introduced bunnies, as well as the Hallowe’en and Christmas lines.

A factory fire of 30 November 1999 destroyed some batches of Peeps and Bunnies, setting back Easter production for 2000.

[1] Sam Born also invented in 1916 a machine designed to insert sticks into lollipops — it was called the Born Sucker Machine.

A “Peep” gets its name from the sound a chick makes.