They consist of pepperoni slices or sticks enclosed inside yeast-risen white bread dough, and baked.

Each soft bread roll ends up about 5 to 6 inches (13 to 15 cm) long. Some of the oil from the pepperoni infuses bread inside the roll near it, and makes the bottom of the roll a rusty-orange colour.

Pepperoni Rolls are sold throughout the West Virginia area at convenience stores, gas stations, doughnut shops, etc, who provide microwave ovens to warm them in. They can also be eaten unheated. They often come with packets of marinara sauce to dip them in.

In diners, they are often split open, toasted or not toasted, and used as a base for toppings such as chili, or cheese and peppers, or chili and cheese. At Colasessano’s Pizza & Pepperoni Rolls in Fairmont, West Virginia, their 8 inch (20 cm) Pepperoni Rolls are split after baking, topped with provolone and Oliverio pickled peppers and a meat sauce, and toasted. The price is about $4 US (2009 prices) for this meal; just a regular Pepperoni Roll is $1.75.

The pepperoni in Pepperoni Rolls may be in short sticks, or slices, depending on the bakery. Abruzzino in Gypsy, West Virginia, does slices, even though some purists say it’s gotta be sticks.

The dough recipes seem to have lots of fat in them, and possibly an egg or two, to make the baked dough end up soft. Dough from a generic bread dough recipe may not come out soft enough. Some home cooks cheat at making them by using Pillsbury crescent dough; others swear by Walmart Flaky biscuit dough or Kroger frozen roll dough.

Some purists say that if you put anything other than pepperoni inside the roll, it’s a pizza roll, but some commercial makers such as Home Industry Bakery of Clarksburg, West Virginia, do add cheese as well. Usually, when a commercial maker of Pepperoni Rolls adds cheese, it’s mozzarella, but occasionally the cheese may be pepper-jack.

A few makers may even put tomato sauce inside.

A company in North Carolina makes a version called pepperoni pocket sandwiches for the US Military (as of 2002.)

Pepperoni Rolls can be frozen. Wrap in tin foil before freezing. To use, unwrap the Pepperoni Rolls and let thaw for about three hours. Warm in heated oven (400 F / 200 C) for about 15 minutes.

Some think the originator might have been People’s Bakery (founded by Giuseppe Argiro in 1927) in Fairmont, West Virginia, now named the Country Club Bakery. There appears to be one central source for this information — a book called “Way Out in West Virginia: A Must-Have Guide to the Oddities and Wonders of the Mountain State” (1999) by Jeanne Mozier, who is also an astrologist. Nothing about Agiro, his bakery or Pepperoni Rolls appears in local newspapers of the era.

In any event, the story goes that Argiro had first worked in the coal mines of West Virginia, to which a lot of Italian workers, particularly from Calabria, were recruited to work. Reputedly, he like many of his fellow workers, took bread and meat for lunch, according to his son, Frank Argiro. Eventually, Argiro saved enough to leave the mines, and set up a bakery business of his own.

He got the idea of providing his former workers with a cheap, easily portable food to take to work that only required one hand to eat. In a way, one could think of them as a take on calzones. As for pepperoni for the choice of meat to go inside the bread, one can only surmise that something blander, such as mortadella, wouldn’t have had the same appeal. Argiro charged 45 cents a dozen for his rolls at his bakery; stores that bought them would sell them on for 5 cents each.

The date for his new bakery product being sold is put sometime between 1927, the founding of the bakery, and the 1950s (note that the war ration points required in America for pepperoni were reduce to just 1 in 1943.)

Another long time maker of Pepperoni Rolls is Tomaro’s Bakery in Clarksburg, West Virginia, founded in 1914 by Anthony Tomaro. The bakery has been making them forever, but they’re not sure when they actually started, and they don’t claim to be the originator of them.

There is very little reference to Pepperoni Rolls in newspapers prior to the 1970s, when grocery stores start advertising that they now carried them.

1951 is the earliest newspaper mention of a Pepperoni Roll that CooksInfo.com has spotted. It is from an advertisement in Uniontown, Pennsylvania, a bit north-east of the West Virginia border: 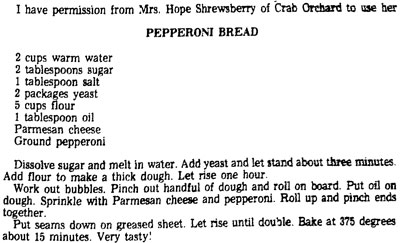 Starting in late the 1960s, “Pepperoni Bread” was advertised by the Drive-In Bakery at 501 South Valley Drive in Beckely, West Virginia. [1]

In 1977, the Beckley Post Herald carried a recipe for them, calling it “Pepperoni Bread.” [2]

In 1987, the U.S. Senator for West Virginia, Jay Rockefeller, helped quash a USDA proposal that would have seen the bakeries making Pepperoni Rolls classified as meat-packing plants (raising their costs of operation.)

A pepperoni roll bake-off is held every year at the West Virginia Three Rivers Festival in Fairmont for home bakers.

It’s a myth that other states ban the sale of meat baked inside bread. If it were, Pizza Pockets would not exist.

‘Over the mantelpiece was … a large framed photograph of Francatelli, that immortal chef whose memory is kept green in so many kitchens, and whose recipes are still followed as are followed the footprints of the great ones in the Everlasting Sands of Time.’ — Robert Smythe Hichens (English author. 14 November 1864 – 20 July 1950)