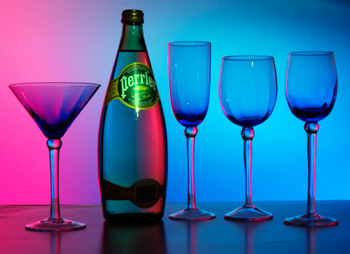 Perrier is a bottled mineral water.

The water comes from a plain in Vergèze a small village in the south of France, 4 miles (7 kilometres) south-west of Nimes. The plain is surrounded by limestone rock hills.

Consequently, bottlers have drilled and installed pipes directly into the carbon dioxide producing rocks to a depth of approximately 1500 feet (450 meters.) The carbon dioxide is extracted through the pipes, then combined under pressure with the water at time of bottling in the plant. The combination of the carbon dioxide and water happens at strictly controlled levels, giving an artificial consistency of production. The gas has to be filtered first, because it contains trace hydrocarbons (specifically, benzene), as well as hydrogen sulphide, argon, ethane, helium, methane, neon, nitrogen, propane, and toluene. Because the carbon dioxide is now being drawn off artificially, that means that there is less to rise naturally into the water in the aquifer.

1863 – Rights to exclusively exploit the Perrier spring were granted to the “Société de l’Etablissement Thermal des Eaux Minérale de Vergèze” by Napoleon III. Facilities were built for making bottled water and for bathing;