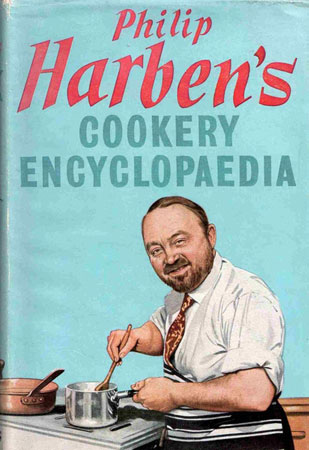 Philip Harben had one of the world’s first televised cooking programmes, starting in 1946 on the BBC.

“Philip Harben made his first appearance in the programme billed simply as “Cookery” on 12th June 1946. (The show went out at 8.55pm and ran ten minutes — he made lobster vol-au-vent.) It was on 1 Sep 1947 that his appearances were billed as being by ‘the television Chef’ and it was from that date that he was described as such in his own programme.” [1]Correspondence with Cooksinfo.com on 19 October 2013; on file at Cooksinfo.com

The series was broadcast in black and white. At some times, he had to use his own personal rations (Britain was on war rations until around 1954) to obtain ingredients for the programmes. He showed his audience how to cook with what was available at the time: for instance, he would show them how to cook chips with steak and kidney pie. Bedecked with a marvellous beard, he spoke with a good BBC accent, and was very good-natured and happy on his shows. To go on air, he always wore a striped apron.

He wrote a column for Women’s Own magazine. Harry Diamond, deputy chief sub-editor at the time, was once forced by space restrictions to remove three or four words from one of Philip’s recipes, causing one of the few recorded incidents when Harben’s good nature failed him.

He authored over 20 cook books. In his books, he took a rational approach, stopping to explain the chemical reactions involved, particularly in his book “The Grammar of Cookery.”

He was a Freemason, a member of the Savage Club lodge in London. He was married to Katharine (Kathy) Kenyon.

(All of these were on BBC; there was just one channel in England in those days.)

“The Cornish pasty [is] one of the best examples in the world of what one might call functional food. For the Cornish pasty … is not merely delicious food, it was designed for a certain quite definite purpose; it was designed to be carried to work and eaten in the hand, to be taken down the mine, to sea, to the fields. You will see a Cornishman munching his tasty pasty squatting in the narrow tin-mine workings, sitting on the nets in his leaping fishing boat, leaning against a grassy bank whilst the patient plough-horses wait.” — Philip Harben. Traditional Dishes of Britain. London: The Bodley Head, 1953. pp 9 to 10.

“The most delightful and instructive book on cooking that I have ever read….In my opinion, not only will children love it and use it with joy, but hundreds of adults will dip into it and learn a surprising amount of elementary facts about cooking that no book has told them before. I am no cook, but his book could make me one. I am going to give a copy to each of my daughters. Mr Harben’s deft touches lift the book right out of the ordinary rut. To learn the art of cookery from such a merry, friendly teacher as Mr Harben will be nothing but sheer joy to any child.” — Enid Blyton, foreword to “The Young Cook”. 1952.

This web site generates income from affiliated links and ads at no cost to you to fund continued research · Information on this site is Copyright © 2023· Feel free to cite correctly, but copying whole pages for your website is content theft and will be DCMA'd.
Tagged With: British Food, English, English Food