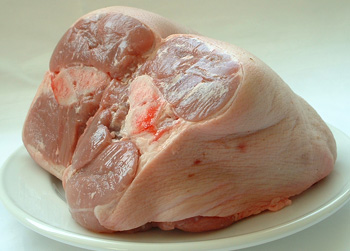 Pig’s Feet are the feet, with ankles attached, from pigs. Counting the fore and hind trotters, there are four in all on a pig. The rear ones are meatier.

Pig’s Feet give off a lot of gelatine as they cook, as the connective tissue in them renders. The gelatine gives a good set to meat pies. Consequently, Pig’s Feet are good to toss into a stew, as the gelatine in them will thicken it. When boiled, the stock they were boiled in will be gelatinous afterward, but it usually needs to be reduced to make a firm jelly.

Many of the pigs feet available for sale in the UK get exported to Europe, particularly France and Spain.

In major cities in Ireland, street vendors sold salted pigs’ feet up called “Crubeens” until the 1940s (they still needed cooking at home.)

They were served in pubs, fully cooked, often with cabbage. They were a good food for pubs to sell, as their saltiness made people thirsty for more bee. You’d just eat them with your hands.

To prepare Pig’s Feet, hold them over a flame first to burn off the hairs, then scrub well in water.

To cooking by boiling, simmer for about 1 ½ hours. You may wish to season the water with vegetables and herbs such as bay leaves, celery, onion, parsley, or thyme. They are done when meat comes away easily from the bones.

Or, braise for about 3 hours on the stove, or about 6 hours in the oven.

“Pigs’ Feet, Fried: Pigs’ feet are frequently used for jelly, instead of calves’ feet. They are very good for this purpose, but a larger number is required (from eight to ten or twelve) to make the jelly sufficiently firm. After they have been boiled for jelly, extract the bones, and put the meat into a deep dish; cover it with some good cider-vinegar, seasoned with sugar and a little salt and cayenne. Then cover the dish, and set it away for the night. Next morning, take out the meat, and having drained it well from the vinegar, put it into a frying-pan in which some lard has just come to a boil and fry it for a breakfast dish.” — Eliza Leslie. New Receipts for Cooking by Miss Leslie. 1854.

“BROILED PIG’S FEET –Thoroughly clean as many pig’s feet as are required, and split lengthwise in halves, tying them with a broad tape so they will not open in cooking. Put in a saucepan with a seasoning of parsley, thyme, bayleaf, allspice, carrots and onions, with sufficient water to cover. Boil slowly until tender, and let them cool in the liquor. Dip in the beaten yolks of eggs and warmed butter. Sprinkle with salt and pepper and cover with bread crumbs seasoned with very finely chopped shallot and parsley. Put on a gridiron over a clear fire and broil until well and evenly browned. Unbind and arrange on a dish, garnish with fried parsley and serve.” — Rufus Estes. Good Things To Eat, As Suggested By Rufus. Chicago: The Author. 1911. Page 22.