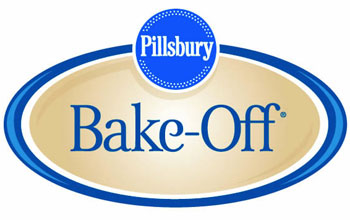 The Triple-Crown of American cooking contests consist of the National Chicken Cooking Contest, the National Beef Cook-Off, and the Pillsbury Bake-Off.

The Pillsbury Bake-Off contest started in 1949, and until 1976 was held annually. Starting in 1976, the Pillsbury Bake-Off takes place in even-numbered years. The prize, increased to $1 million US in 1996, is not paid in a lump sum: it’s paid $50,000 a year over the next 20 years, and in America, prize money is subject to income tax.

The contest starts with recipes being submitted from all across America (only American residents are eligible.) Recipes submitted become the property of Pillsbury. The recipes are handed to the screening committee stripped of all identifying information to ensure impartiality. In 2006, they received over 10,000 recipe submissions.

Recipes sent in are eliminated if they weren’t submitted in the correct format, if incomplete directions are provided, or if precise measurements aren’t given. After recipes pass that first culling, there is an entire team dedicated to tracking down copycats to ensure the recipes submitted are substantially original, and not just copied out of a magazine, book or off the Internet.

Selected recipes are then prepared in test kitchens at Pillsbury’s in Minneapolis, Minnesota and given to a taste panel.

From this taste-test stage,100 finalists are selected, and flown to where the Bake-Off is being held that year.

All the shopping is done for the contestants. The contestants are given their ingredients, and mini-kitchens, and directed to prepare their recipes. Judges are then sequestered as they do their evaluation of the results.

The Bake-Off organizers aim to prevent family legacies from forming amongst the contestants. If a person has been a finalist three times, not only can she or he never enter again, but also his or her relations through marriage will also be barred as well as all descendants, yeah, even unto their children’s children’s children. Consequently, most families have a “two-times” only rule of honour amongst themselves, to keep the door open for their progeny.

Every year a book is published with recipes from the Bake-Off.

The first Pillsbury Bake-Off was held on Monday, 12 December 1949 in the Grand Ballroom of the Waldorf Astoria Hotel in New York City. Electric ranges and work-tables were set up for each finalist in the ball room. Power was brought in from subway tracks nearby. There were three male entrants (it would take 47 years for a man, Kurt Wait in 1996, to win the contest.)

Pillsbury’s called it the “Grand National Recipe and Baking Contest.” (In later years, the media started referring to it as the “Bake-Off Contest”, so Pillsbury’s claimed the name and registered it.) The 1949 contest was held to celebrate Pillsbury’s 80th birthday, and was meant to be a one-time event. The winner of that first ever Bake-Off was a Theodora Smafield of Rockford, Illinois. Her recipe had you wrap your dough in a tea towel, and put it under warm water for the rising. It was odd enough to catch the judges’ attention, and hold it.

She won $50,000, which was actually double the advertised prize money of $25,000 because she had a plastic advertising token. These tokens to promote the event had been distributed in October. If you got one and held onto it and won, your prize money would be doubled. Smafield produced hers, and doubled her winnings.

The recipes were released in the first week of January 1950 by Ellen Pennell, director of Ann Pillsbury home service activities.

Eleanor Roosevelt in her newspaper column wrote of the first contest: “This is a healthy contest and a highly American one. It may sell Pillsbury flour but it also reaches far down into the lives of the housewives of America. These are women who ran their homes and cooked at home. They were not professional cooks.”

Chronology of the Pillsbury Bake-Offs

“A Twist and Mystery Token Won Big Sum For Nation’s Top Home Baker”.
A twist — a winning twist — and a Pillsbury mystery token won $50,000 in cash for the nation’s top home baker, Mrs. Ralph E. Smafield of Detroit, Michigan, in the biggest Bake-Off ever held. If she hadn’t had the token she would have won only $25,000.

Mrs. Smafield, an attractive young mother, competed against a hundred top cooks of the country — 97 women and 3 men, from 37 states, the District of Columbia and Alaska — Monday in the Grand Ballroom of the Waldorf Astoria.

The know-how of making the “water-rising nut twists” which she entered was handed down to her by her mother and is one of the thousands of cherished recipes hitherto disclosed to only a few.

The $50,000 top Pillsbury award won by Mrs. Smafield was presented by Mrs Eleanor Roosevelt at a luncheon honoring all 100 contestants Tuesday.

The eight other top winners in the Pillsbury Bake-Off are: Miss Laura Rott, Naperville, Ill., won second prize of $10,000 for her “mint surprise cookies.” She lives on a 70-acre farm with her parents and is employed at the Kroehler Manufacturing company.

Third prize of $4,000 went to Mrs R.W. Sprague, San Marino, Calif. She submitted to the seven food editor judges “Carrie’s chocolate cake.” She is a graduate of the University of Arizona.

Six class prizes of $1,000 each were awarded to: a Des Moines kindergarten teacher, Mrs. C. Arthur Reseland, for her “crusty rolls.” Her husband is a United States department of agriculture statistician.

A California grandmother from Los Angeles, Mrs. Estella Worley, baked a “Golden glow cake,” the pride and joy of her two daughters and granddaughters.

“Savory dumplings,” entered by Mrs. Joseph F. Maley of Osborn, Ohio, won first place in the entree class. A young mother of two, Mrs. Maley is in New York as the guest of Pillsbury Mills, as are all other 99 contestants. This is her first trip to New York.

Mrs. Robert Monroe, wife of an Atlantic City hotel manager and mother of two children, won the class prize for pies with her “black and white pie.” Since childhood, she has always been ‘interested’ in making up recipes, and her pie is a startling new version of a chocolate cream pie.

Mrs. Harry W. O’Donnell, a Sunday school teacher and mother of four children from Crandon, Wisconsin, who also taught home economics during the war-time teacher shortage, won the dessert class prize for her “glorified cherry upside down cake,” which she concocted as a special treat for her bridge club.

The three men who competed with the 97 women found out who wears the aprons in the family and chivalrously congratulated the nine feminine winners as their betters with the batter.