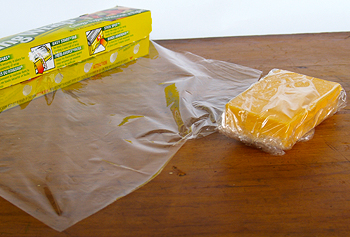 Plastic wrap for food is an American invention that came about by refining plastics invented during the Second World War. It has been in our homes since 1953.

In the UK, plastic wrap is called “cling film.” In North America, the brand name “Saran Wrap” has become the word used generically by consumers, so dominant in the marketplace is that one brand there.

Some makes of plastic wrap will lose their “cling” over time in the freeze, exposing the food to freezer burn. To prevent this, many people wrap first in plastic wrap, and then either wrap again in tin foil or then place the wrapped food in freezer bags.

Plastic wrap that is edible is now (2004) under development by Oregon State University’s Department of Food Science and Technology. You won’t have to unwrap purchased food before eating it. The wrap can also be used in a liquid form, and just sprayed on the food to coat it. It’s being made partly from “chitosan”, which occurs naturally in the shells of shellfish, and from a protein derived from egg white. It’s thought that fresh fruit can be sprayed with it as well to help it ship better.

Obviously, never use plastic wrap on foods which you are putting in a regular oven, or boiling, steaming or barbequing. Any health issues aside, it will melt on your food and you won’t want to eat it.

An Internet warning circulates by email about cooking in Plastic Wrap. It warns that eating food microwaved with Plastic Wrap on it could cause cancer. “Saran wrap placed over foods as they are nuked, with the high heat, actually drips poisonous toxins into the food ..” followed by, of course, “pass this along to your friends.”

Research by various authorities to date has only shown, however, that though this is possible with Plastic Wraps not marked as microwave safe, it’s not been proved that the compound in question that can migrate into foods, diethylhexyl adipate (DEHA), has any direct link with cancer. For the compound to migrate into food, the Plastic Wrap must be directly on the food.

Most North American Plastic Wraps are sold as all-purpose, saying on their boxes: “Great in Microwave; Excellent in Freezer & Refrigeration”. The only health warning is “Caution: Sharp cutting edge under tear strip. Avoid Contact.”

This web site generates income from affiliated links and ads at no cost to you to fund continued research · Information on this site is Copyright © 2023· Feel free to cite correctly, but copying whole pages for your website is content theft and will be DCMA'd.
Tagged With: Coverings