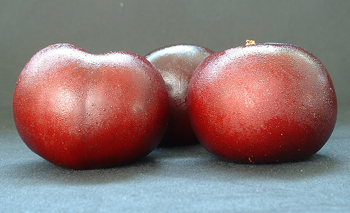 Plums
© Denzil Green
Contents hide
Plums are the second most popular fruit in the world (apples are the most popular.)

You can classify Plums in many ways. One is based on what you do with them — either eating them raw or cooking with them. Another divides them into 3 families: European, Damson, Japanese. Yet another is to look at those that are freestone — the flesh separates easily from the pit — from those that aren’t (clingstone.)

Damson Plums are small, oval, full-flavoured, but a bit tart for eating raw, so they are used for cooking, and preserving.

Not all Plums are Plum-coloured — that is to say, purple. They also come in green, yellowish green, yellow and red. Consequently, it can be hard to tell if a Plum is ripe based on colour, unless you are familiar with the variety. The best way to tell if it is ripe is just to squeeze it slightly to see if it is soft. Meanwhile, avoid all the bruised fruit that everyone else has squeezed. Plums will, like many fruits, continue to ripen after picking.

Sloe Plums, which never grow to much more than ½ (1 cm) inch big, are used to make Sloe Gin.

There is no need to peel plums before cooking with them. Just wash, cut in half around the pit, and chop as needed. It will be a bit more work getting the flesh off the pit in clingstone plums than it will be in freestones. 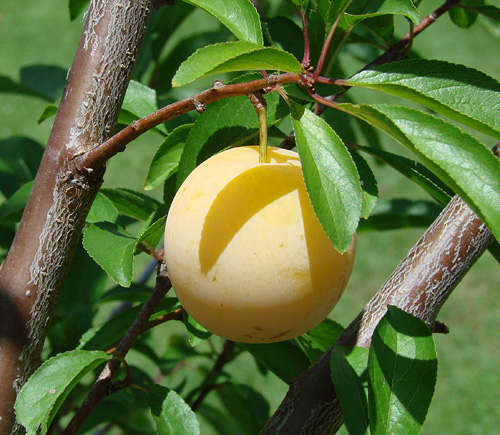 Good source of potassium, Vitamin A and fibre. An average plum has anywhere from 30 to 60 calories.

The pit of the plum has cyanogens in it, which are bound molecules of sugar and cyanide. When this bond is broken, the cyanide becomes free and able to act. The cyanogens don’t leak at all into the flesh of the fruit, for some reason, but they make it not a good idea to ferment plum pits or break them up and roast them as snack food.

If the Plums are firm, you can set them out at home at room temperature for a day or two for them to soften. Placing them in a paper bag will speed up the process. Though they will soften, they won’t sweeten any more after they are picked. Once they are ripe, they are good for about 3 days in the refrigerator.

All Plums freeze and preserve well. 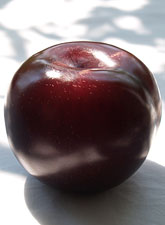 Wild Plum trees actually had thorns, but man has bred that out of domesticated Plum trees.

The Damson Plum is believed to be the oldest variety of Plum. It was grown in ancient Mesopotamia. Some say it may have been grown in the Hanging Gardens of Babylon, though if everything reputed to have grown in that garden had been hanging there they must have called Playtex in for support.

Pompey the Great began cultivating Plums in his gardens in Rome in 65 BC.

Crusaders also brought the Plum back to Europe with them from Syria.

In 1660, Plum used to mean “a dried grape or raisin such as used for puddings, cakes, etc” (Oxford dictionary).