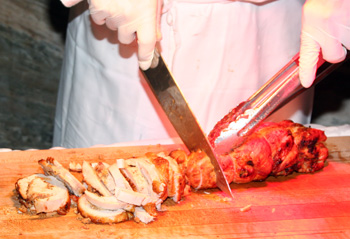 Pork Tenderloin is a lean, tender, more expensive, boneless cut of Pork with a mild taste from the sirloin end, just inside the rib bones.

The tenderloin comes from the bottom of loin area. It starts in the centre loin and goes into the sirloin.

Sometimes it is not cut out as a separate cut, but rather just included in loin roasts, or in pork chops.

Some cuts will have silver skin on them. Some people call for this to be removed, but it is not really necessary, it will just disappear during cooking anyway. Some people like to cut it off, though, because it shrinks during cooking, puckering up the shape of the meat a bit.

Some people like to cut the thin, tapered end off before cooking, because it might just overcook and burn, and freeze that for another use.

Some sources may tell you to “trim off excess fat” off the Pork Tenderloin, but at this point in time, with pigs being bred ultra lean, that may be a moot point.

Tenderloin is good for grilling on the barbeque, as it cooks very quickly. Cut into 2.5 cm (1 inch) slices. Good flavouring marinades for the slices include (per 1 kg / 2 pounds of tenderloin) Thai fish sauce (3 tablespoon fish sauce plus 1 tablespoon oil ), or 3 tablespoon good quality apple cider vinegar with 1 teaspoon ground cumin. For both, put marinade and tenderloin slices in a sealed plastic bag in the fridge for a few hours or overnight, turn occasionally.

When grilling, it is also good with a rub.

For stir-frying, cut into strips. Cook the strips 2 to 4 minutes on their own, then another 2 minutes with the vegetables.
For kebabs, cube it;
On grill, about 3 to 4 minutes to side (that’s about 12 minutes altogether);
In a frying pan, 2 to 4 minutes per side;