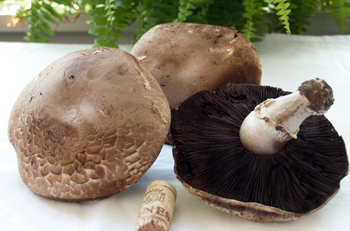 Portobello mushrooms are the same species of mushroom as white button mushrooms (Agaricus bisporus). They are just a slightly different strain of that species, which develops a thin layer of tan or coffee-coloured cells on its cap.

When young, and harvested while the cap is still closed, they are called cremini mushrooms.

Being fully opened mushrooms, some moisture loss has started in the portobello, which condenses its flavour and gives it more of a meat-like texture.

Some recipes will you have clean out the caps by removing the gills. This is not really necessary. Recipes that have you do this are having you make more room for a stuffing to go in. If you do clean out the gills, toss the scrapings into a small container or freezer bag and freeze them until a use for them in cooking presents itself.

Some say to discard the stems, as they are tough. The stems do need to be cooked, as they are a bit too tough to eaten fresh, but they are lovely for cooking with. If the recipe doesn’t have you chop them up and incorporate them into the stuffing or what you are making, wash them and toss them into the freezer as well.

See main entry for mushrooms. Tip: if you do freeze portobello caps, they won’t come out suitable for use as caps for stuffing. Count on needing to chop them up and use as you would any mushroom that you incorporate into a dish.

If you’re confused about how the name should actually be spelled, join the club; everyone else is, too. The reason is that the name doesn’t really exist. It’s not an Italian name. Mushroom marketers just made it up, and everyone selling the mushrooms either got mixed up over whether o’s or a’s should be used in the name, and if so where, or some people selling the mushrooms just liked their mushrooms’ name pronounced a little differently.

For the record, it appears that “portobello” was the original name invented.

This web site generates income from affiliated links and ads at no cost to you to fund continued research · Information on this site is Copyright © 2023· Feel free to cite correctly, but copying whole pages for your website is content theft and will be DCMA'd.
Tagged With: Agaricus Mushrooms