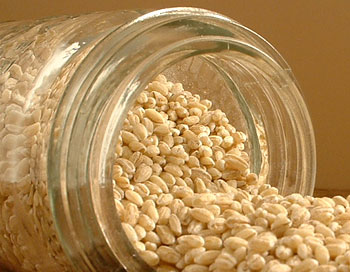 Pot barley is a grain used largely in soups and broths to add heft and a bit of thickness to the dish. It also adds a slightly nutty taste.

It is a processed form of barley. In terms of processing, hulled barley receives the least, with just the hull being mostly removed and no more being done to it; the bran is left on. Pearl barley receives the most processing; it is polished to ensure that no trace of hull or bran remains.

Pot barley falls in between the two. It is milled three times, and the husks are partly removed, but some of the bran will remain. The kernels are slightly lighter in colour than the hulled barley.

Classically, it is used in soups such as ‘Beef and Barley’.

Pot barley takes about an hour to cook. At the end of cooking, it will be a bit chewier than pearl barley but less chewy than hulled. The chewiness gives interest and body to a soup.

It is usually added towards the start of cooking, if not right at the start. It can stand up well to long cooking times such as in slow cookers, as well as to being cooked in pressure cookers.

Pressure cooking: soak first in a quantity of room temperature water 4 times the quantity of pot barley you are using. Allow to soak for 4 hours, or overnight. Then allow 20 minutes of cooking time in a pressure cooker. If cooking on its own (for example, not in a soup), cook in 750 ml (3 cups) of water per 225g / 250 ml (1 cup) of pot barley.

Pearl barley, though cooking time will be less.

Pot barley is also known as Scotch or Milled Barley.