A member of the grass family, barley grows from around 45 cm to 1 metre (1 ½ to 3 feet) tall. The barley grains are produced by the flowers which grow at the top in spikes.

Historically, humans have been very dependent on Barley as a food crop, but that has changed. Of the barley grown in North America today, 2% is used for human consumption. 3% gets re-used as seed, 40% gets used for malted barley for alcohol, and the rest, 55% is used as animal feed.

Barley is an annual grain that has to be re-seeded each year.

All Scotch malt whiskies are produced only from malted barley (barley which has started to germinate and then been dried to stop germination.) Barley is also used to manufacture some white vinegars which are distilled from grains. At home, people seem to use barley primarily in soups and stews.

The bran contains the fats and oils that make up the protein. Pearl barley stores better and longer because the bran is removed; Pot barley and hulled barley needs to be used or kept refrigerated so the protein won’t go rancid.

While not gluten free, barley flour contains so little of the protein from which gluten is developed that it is unsuitable for yeast breads on its own. To make raised breads from barley, a general proportion of no more than 25% barley flour to 75% wheat flour is the rule of thumb. It can also be used in cakes, muffins, cookies or pastry in combination with wheat flour.

Try using cooked barley as an ingredient in your poultry stuffing; it will add a wonderful nutty flavour (especially nice with mushrooms). In soups and stews, barley acts both as a thickener, and as a chewy, puffy grain that has a homey and comforting taste to it. Barley flour makes an excellent thickener for selected sauces where its heartier taste would be an asset.

Barley, which is very high in beta-glucans, is believed by some researchers to help to clean out the arteries and valves around the heart that have become plugged up with layers of old fat build-up. In doing so, it is believed, it plays a significant role in lowering blood cholesterol levels.

It is low in fat and cholesterol-free; it is high in carbohydrates, with moderate amounts of protein, calcium and phosphorus and small amounts of B vitamins. Contains a good amount of niacin and vitamin E.

Barley appears to have originated in Western Asia. Humans have been using it for thousands and thousands of years. Stone Age cakes have been found made of barley and wheat. There is evidence of barley kernels in Egyptian pyramids dating from 5000 BC. By 4000 BC, the Babylonians were using it to produce beer-like drinks. In Ancient Greece, barley was very popular and was the preferred food of their gladiators, who were even called “hordearii” — barley eaters.

The Romans used it for porridge and bread, and in preparing “puls.” Barley flour was used to make a pizza-like bread called “libum”. But wheat began to overtake barley in popularity as the Empire grew wealthier. Wheat could good make raised breads, and what’s more, a nice white flour could be ground from it. Barley became looked on as a food for the poor. When you visited a Roman household, you could tell how highly you were esteemed by whether you were served nice white wheat bread, or a dark bread made from barley. After a time, barley was considered fit only for the poor. Soldiers being punished got, among other things, barley bread. But that doesn’t mean the majority of Romans didn’t eat barley — they did, because the majority were poor.

In the Middle Ages, most people ate barley bread, and the upper classes had wheat bread.

Barley was brought to America by the early British, Dutch and Spanish colonists. French settlers brought barley to Canada.

The French word for Barley, “orge”, comes from the Latin word “hordeum.” “Orzo” in Italian. 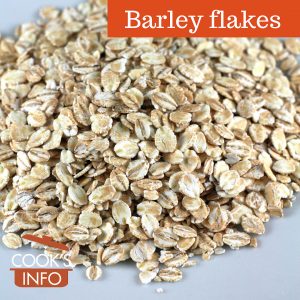 Barley flakes are flattened, husked barley kernels. They are thick and chewy, with a satisfying rich barley taste.

Barley flour is mostly made from pearl barley. Until recently, it wasn't made from a "more complete grain" barley than pearl because of the expense and difficulty of getting off barley's tough hull without taking the bran off with the hull. New hull-less...

Barley Grits © Denzil Green Barley grits are made by husking barley grains, then toasting them and cracking them into smaller pieces. Sometimes the pieces are also steamed or parboiled, then dried for shipping (the steaming or parboiling speeds ...

Beremeal is a primitive variety of barley, with 4 rows of grains, and a spiny, sharp, seedhead. The grain is very dark, almost black. Beremeal is grown in the Orkney and Shetland Islands, Scotland. Beremeal used to be grown primarily for brewing,...

This is barley with just the hull removed. It is the least processed form of barley that is edible by humans (we can't digest or eat the hard, tough husk -- only animals can.) It is slower to cook than all other forms of barley you will find for...

Pearl Barley © Denzil Green Pearl barley is the most common form of barley available in stores today. It looks like a small, ivory pearl. It is the most refined barley sold. Hulled Barley: has the husk removed (necessary to make it edible), ...

Pot Barley © Denzil Green Pot barley is a grain used largely in soups and broths to add heft and a bit of thickness to the dish. It also adds a slightly nutty taste. It is a processed form of barley. In terms of processing, hulled barley receives ...

Quick-Cooking Barley is pearl barley that has been processed one step further: it is steamed during processing, so that cooking time takes only 10 minutes. Substitutes You can just use pearl barley and allow for a longer cooking time for the barley. ...

Sprouting barley is barley which is used for making sprouts from. The barley will be either unhulled (e.g. not processed in the slightest), or just hulled and not processed any further (aka hulled barley.)The grains will germinate and sprout in about...