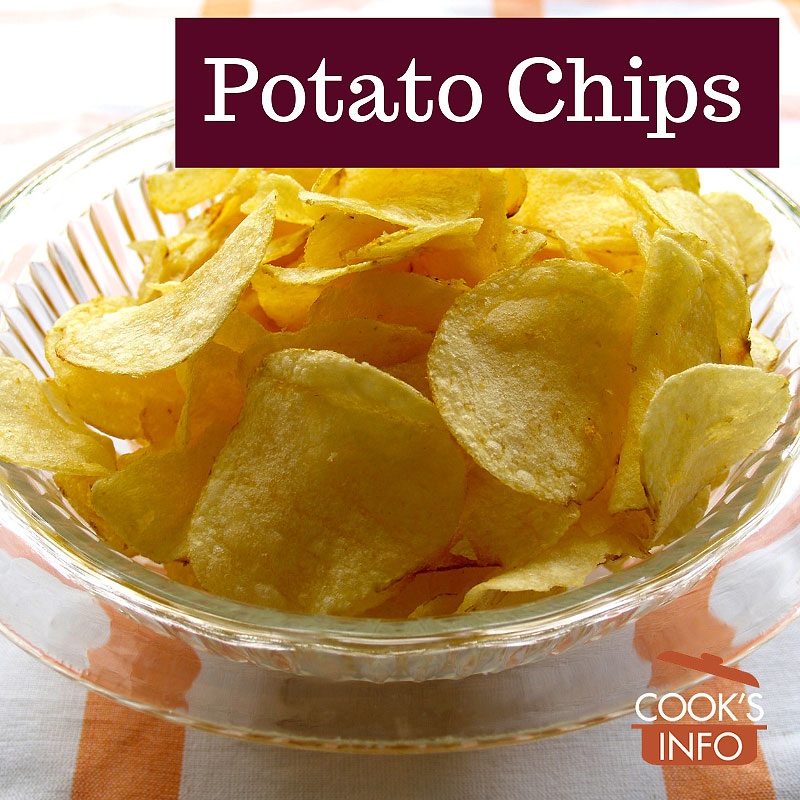 Potato chips, called “potato crisps” in the UK, are very thin slices of potato that are fried until crispy, then seasoned. Versions are now available that are baked, air-fried, vacuum-belt dried [1]Xu, Suxuan. Developing healthy snack chips by continuous vacuum belt drying. PhD disseration. University of Georgia. 2012. Accessed August 2019 at https://getd.libs.uga.edu/pdfs/xu_suxuan_201205_phd.pdf or popped instead of being fried to create lower-fat versions.

Even though potatoes are basically white, potato chips end up a yellowy-brown colour as the sugar in them browns and combines with amino acids in the potato during frying. A potato chip that looks brown or burnt isn’t: very brown chips in your bag came from a rogue potato that had a higher sugar level, or from a potato that got stored at a low temperature, so that its starch converted into sugar. The excess sugar browned more deeply during frying. These can often be the tastiest ones.

Floury potatoes are better for making chips with. They have lower water and sugar levels, which makes whiter, crisper chips. Producers also look for potato varieties that are round, to make more uniform chips.

Crispiness is an essential part of a good chip. The crisp sound is caused by potato cells, which have been turned brittle and dry during the frying, being broken when the chip is bitten into, causing fractures. The more fractures caused at once, the louder the sound, and the more crisp the chip will seem. If chips get damp from humidity, the potato cells soften and lose their brittleness, causing no sound when the chip is bitten into, and the chip is deemed stale.

A researcher at Oxford University proved that the “crisp” sound of a potato chip being bitten into is an essential part of “good” potato chips. Volunteers with sound-sealing headsets on were fed crisps of varying freshness and quality. The sound of the chips being bitten into by them was picked up by a microphone, and fed back to the volunteers via the headsets. Before it was, though, the sound passed through a computer. When the sound was passed through as unaltered, the volunteers rated the chips as “good.” When the sound of the crunch was amplified, they rated the chips more highly. When the sound was dulled or muted, they rated the chips as stale and not-crunchy. [2]McGee, Harold. Testing Whether the Crunch Is All It’s Cracked Up to Be. New York Times. 4 July 2007. The experimental psychologists were Massimiliano Zampini and Charles Spence.

Potato chips are never sold in clear bags, as light makes the taste go off.

Homemade potato chips actually make a very elegant side for a meal. Homemade ones are thicker, and are closer to what the original ones were, in the days before mechanical peelers came along to make them razor thin.

Marcelled Chips are made by Ballreich’s in Ohio. They are chips with waves in them. They are like ruffled chips, but the waves are broader. They have been made since the 1920s.

In cooking, potato chips are usually used crushed, as a breading or a starch. As they contain a lot of oil and salt, they provide both fat and seasoning to a recipe, along with starch of course, and mouthfeel.

When using crushed potato chips as a coating for fish, consider trying salt and vinegar potato chips on the fish to bring some classic tastes together.

To crush potato chips, put them in a sealed plastic bag, or a brown paper bag, or between two pieces of waxed paper or parchment paper, and hit lightly with a meat mallet or roll with a rolling pin until crushed to desired degree of fineness for recipe. Or, open the bag the potato chips are already in a small bit to allow air to escape, and apply some kind of pressure to the bag, even with your hands, to crumble them.

To make your own potato chips

To make your own potato chips: Choose floury potatoes. Peel potatoes, slice as thinly as possible. Soak the potato slices in ice cold water for 30 minutes up to two hours, replacing the water with more ice cold water halfway through. This process helps to make the chips crisp, and because it draws out some of the starch, helps prevent them from entirely sticking to each other while frying. Make sure that all potato slices are covered by the water so they won’t discolour. Drain water thoroughly from potatoes; cook in oil heated to 190 C (380 F) until golden. Be careful of the splattering when you put the slices in the oil. Oil that has been used before will actually make them crispier than brand-new oil. Drain on paper.

To make ahead: heat oil just to 135 C (275 F ). Cook the chips for about 4 minutes — they won’t brown at this low temperature. Remove from oil and put on a plate or in a dish, and repeat until all are cooked. Let cool, cover with tin foil until needed a few hours later. When ready to serve, heat oil to 190 C (380 F), put chips in, and cook until golden. Drain on paper. This will actually produce even crispier chips.

A slotted spoon or a frying basket will help you a lot. Ideally, you want to turn the chips over once or twice while they are frying.

When using alternatives that are less salty, you may need to adjust the seasoning in your recipe.

Green chips or parts of chips that are green come from parts of a potato that was partially exposed to the sun while growing. Technically, green potatoes are toxic, but you’d have to munch your way through several pounds of just green chips alone before there started to be any effect on you.

You can actually freeze potato chips if you freeze them in their original foil bags, unopened. This will help to retain their freshness.

Potato chips were invented in 1853 by a man named George Crum at Moon’s Lake House resort in Saratoga, New York State. He sliced potatoes thinly, fried them up and served them to the guests at the resort. They were a hit. He called them “potato crunches” at first, but people began referring to them as “Saratoga Chips”.

Commodore Cornelius Vanderbilt did not play a role in the story until approximately 1976, when someone at the American Snack Food Association appears to have “written” him in as the restaurant customer first served the chips.

A mass market for potato chips, though, wasn’t possible until the invention of mechanical potato peelers. Before that, they were mostly made in restaurants, and meant to be eaten with a fork. Small “mom and pop” operations also began making them small quantities by hand and delivered them fresh daily to stores in paper bags.

The first place outside America that potato chips were made was in the UK, in either 1913 or 1921 (two different stories exist). Because chips as in “fish and chips” already existed, they called them “crisps” instead in order to avoid confusion. And Americans have been confused ever since. 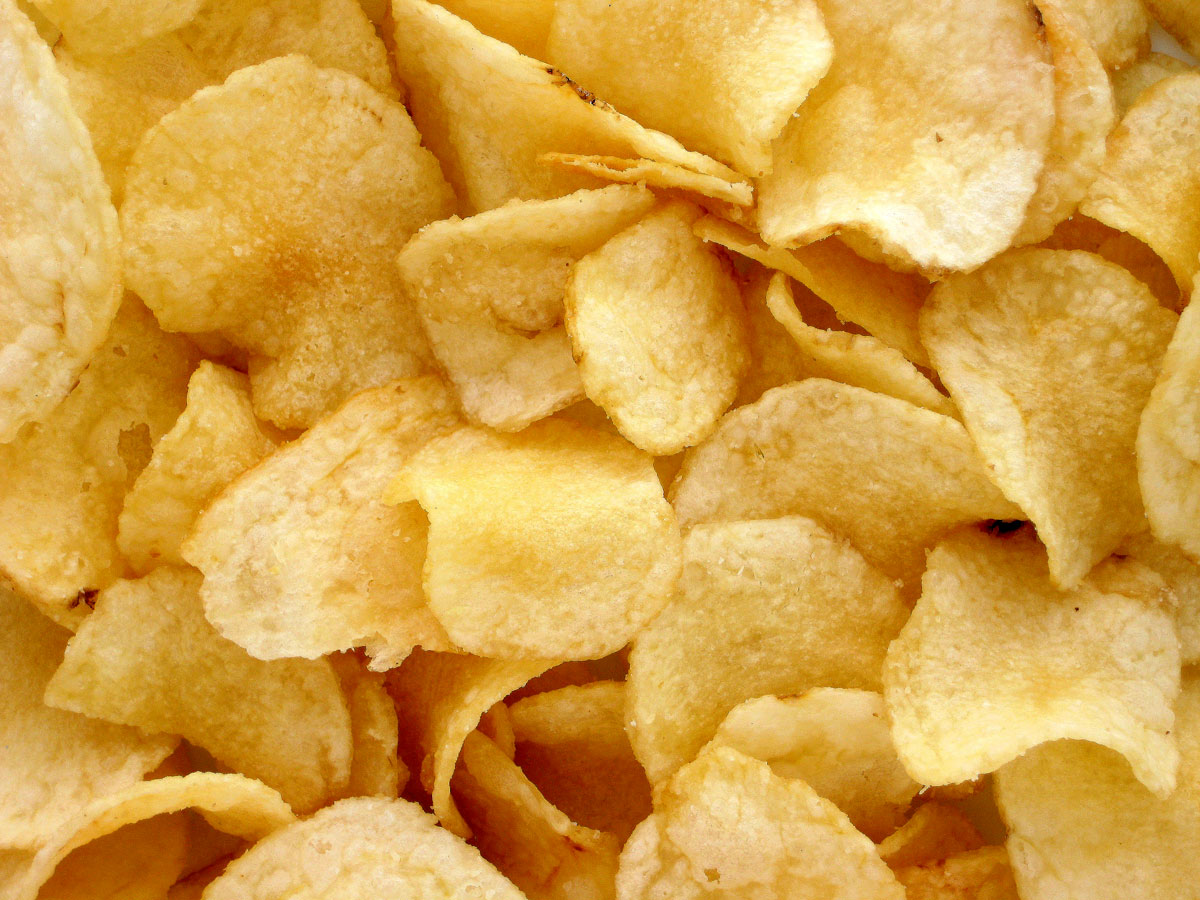 This web site generates income from affiliated links and ads at no cost to you to fund continued research · Information on this site is Copyright © 2023· Feel free to cite correctly, but copying whole pages for your website is content theft and will be DCMA'd.
Tagged With: American Food, Deep-Fried Foods, Potato Chips, Potatoes