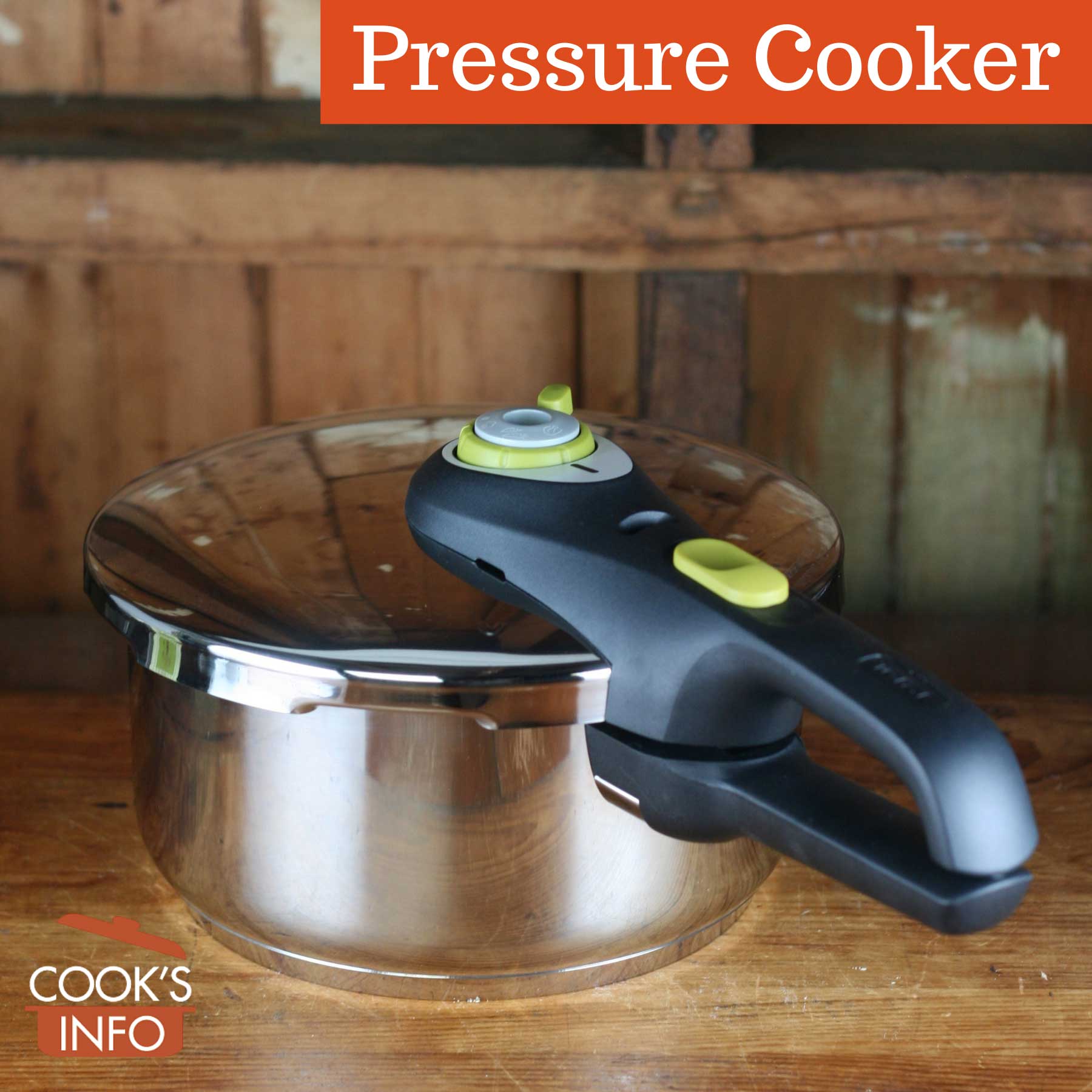 A pressure cooker is a pot to cook food in, under pressure. The presence of pressure can reduce both the cooking time and the energy used to cook something by as much as 50%.

The advantages of pressure cookers

Fans swear it is the best way by far to cook cheap cuts of meat. Fans will have both a small pressure cooker and a large one, and some, an in-between size as well. This allows them to pressure cook several things at once, for instance a pot roast in one, and boiled potatoes in another.

Pressure cookers are very common place in Italy and England, and are extremely popular in India and Brazil. In India, they are in at least 80% of urban kitchens.

Sometimes they are also sold as “multi-cookers”.

It is important to note that although makers of these multi-cookers may say they are fine for home canning, the National Center for Home Food Preservation still recommends against using them for this purpose. See: Canning in Electric Multi-Cookers. 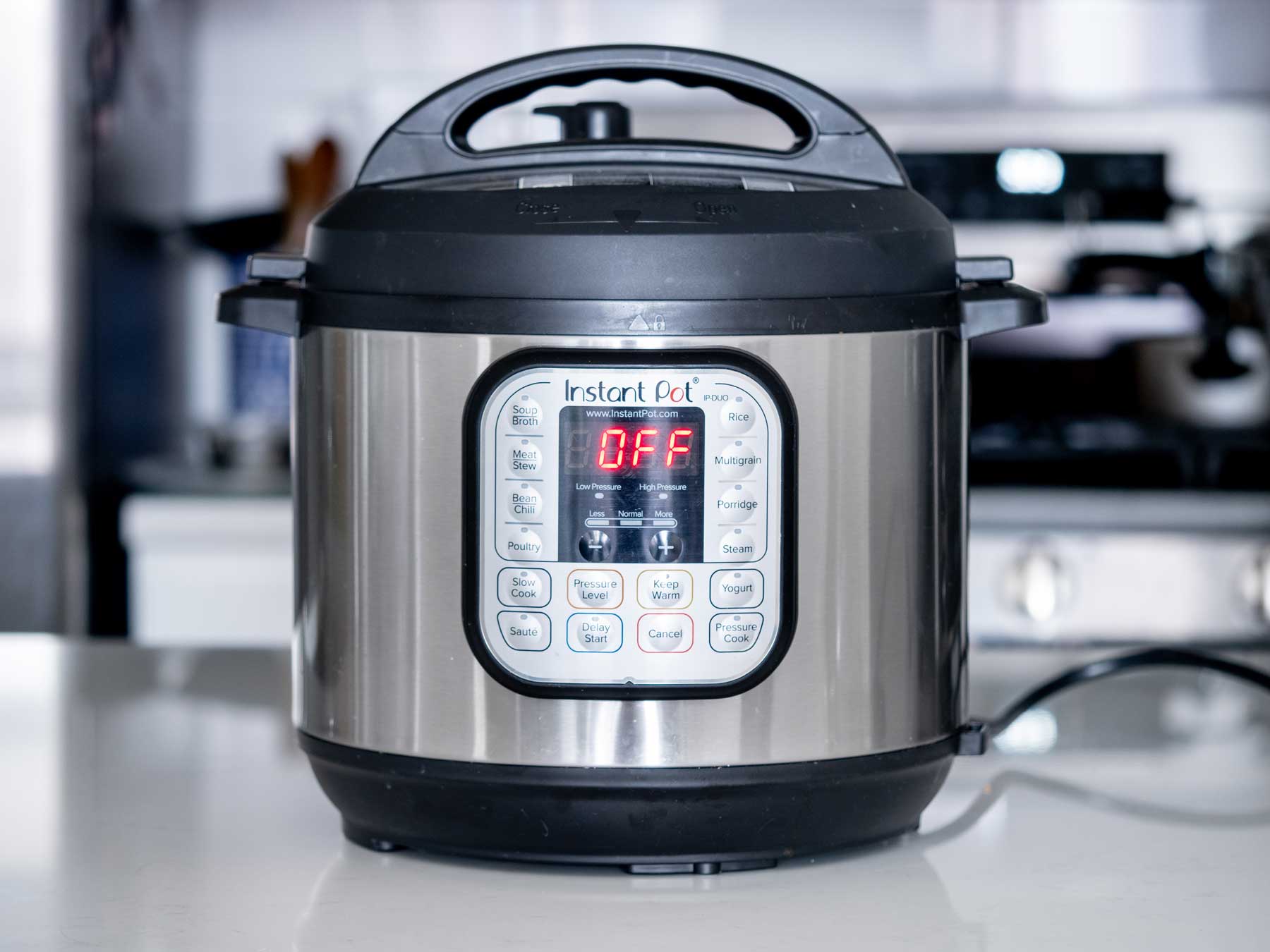 On a stove-top pressure cooker, the vent tube is the part that allows excess steam to escape. You don’t want it to get clogged. You can use a pipe cleaner to clean the vent tube.

On some “old school” models, a small piece called a rocker (aka “regulator”) rests on top of the vent tube. When the rocker begins to rock, it means pressure has been reached and you can reduce the heat a little bit. As long as the rocker is fussing, things are proceeding as they should be, so don’t wander out of hearing range for too long. Some models come with swappable rockers that can vary the pressure achieved inside the pot. Care needs to be taken not to lose the rocker or the pot is useless without it. 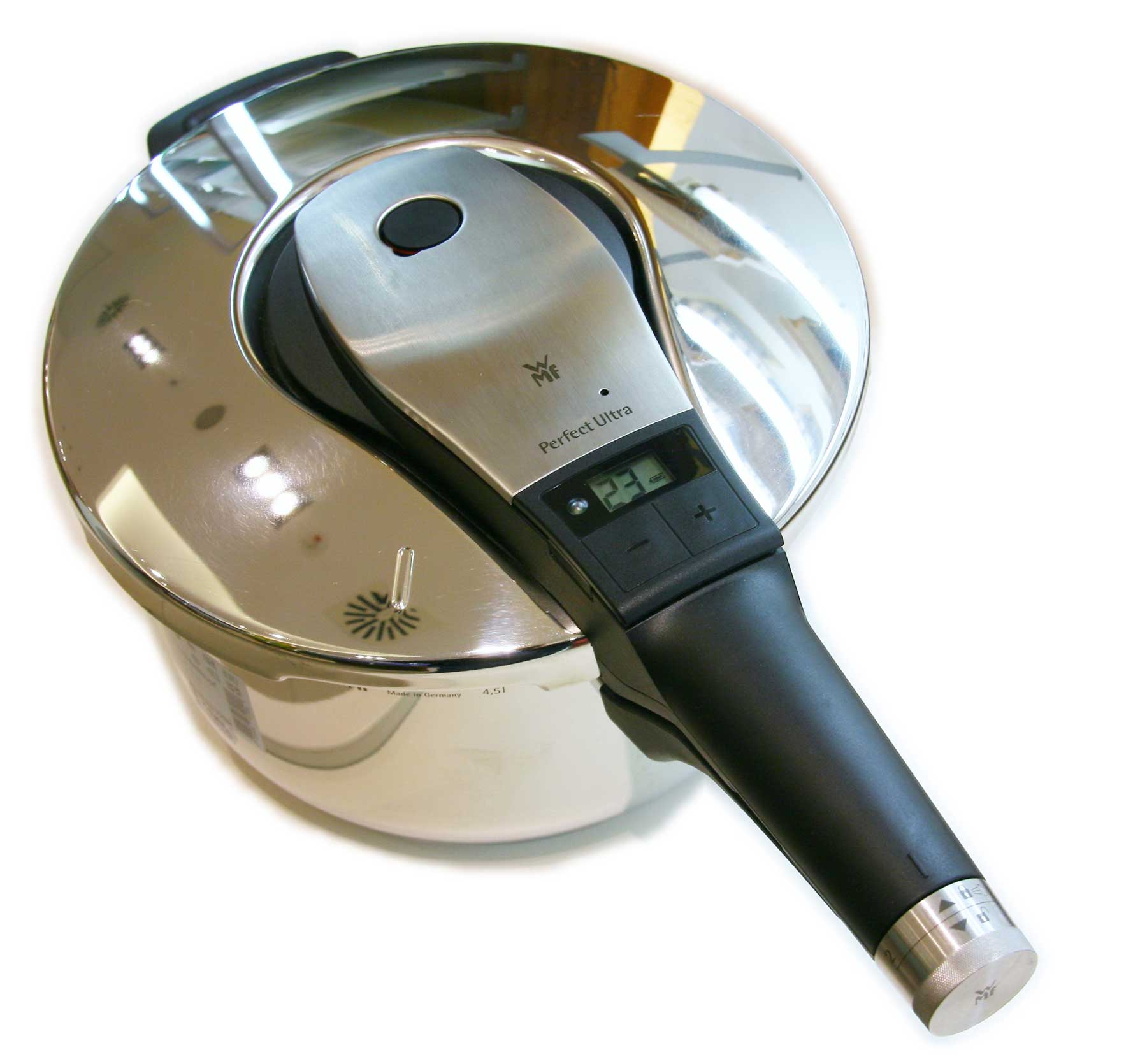 Better ones now in North America, some people feel, are the “second generation” ones that are either imported from Europe or Asia, or European-inspired in their design. They won’t have a rocker on top to let off excess steam, but a pressure regulator instead, built either into the top or the handle, and will have emergency pressure release mechanisms. These new ones won’t even open if there is pressure inside them.

Modern ones may have electronic battery-run timers or controls in the top or the handle of the pot.

You can also get expensive designer ones made by Alessi, the Italian design firm.

The pressure inside is created by a lid that locks on and seals, causing steam and heat inside to build up beyond what can normally be achieved in an unsealed covered pot.

If the pressure increases beyond a certain level, a safety vent releases some of it.

Typically, the pressure inside in consumer-range pressure canners ranges up to 15 pounds per square inch (103,421 pascals.)

Don’t operate a pressure cooker without its rubber gasket in place. The gasket is the rubber ring seal that goes on the underside of the lid. It helps to create a seal, enabling pressure to build up. When the rubber gasket gets hard or sticky, it’s time to replace it. Some people advise that you should store the rubber gasket separately instead of in the pressure cooker. The gasket will last longer that way. If steam is coming out the sides, you need a new gasket. You won’t get any pressure, and with all the moisture escaping, your food will just burn. If this happens, cook your food another way, and put a new gasket on your shopping list.

When pressure cooking dried fruit, dried beans, etc, it is almost always best to rehydrate first by soaking. If not, the dried beans will soak up all the water that you were counting on to make steam with. (An exception for instance is black beans; the recommendation from many pressure cooking experts is that they are better unsoaked.)

When cooking beans, lentils, rice or other grains, don’t have a pressure cooker more than half full. Watch for bean skins clogging up the vent — some people add a bit of oil to the cooking water to help prevent this.

Read the manual for your pressure cooker thoroughly. No general advice can replace the specific advice that your manufacturer has been careful to provide. A pressure cooker is one appliance in the kitchen that people always keep their manuals for. Many pleas are issued for manuals by those who bought them second-hand without manuals.

Don’t fill a pressure cooker more than two-thirds full. It’s okay to use a bit more water than recommended, but not less. Decrease the amount of water when converting from conventional recipes to pressure cooker recipes, because far less water evaporates away.

You need to use a pressure cooker in conjunction with a timer. You count the cooking time from when it comes up to pressure. If there is no pressure after 10 minutes, remove the pot from the heat, let cool, and check the setup,

Don’t open a pressure cooker when under pressure (modern ones, in fact, won’t let you.) Shut off the heat supply, and wait a few minutes before moving the pot. Hit the steam release, if you think the food is done (older North American models won’t have this steam release.) Or let it sit to continue pressure cooking with what heat remains inside, if you want it to. If after you open your pressure cooker and find that your food isn’t ready yet, just put the lid back on, bring it back up to pressure and cook until you figure it is done.

If you are nervous at first about using a pressure cooker, consider doing a “test” run first with just water in it.

Pressure cookers were first conceived by a Denis Papin in 1679; he called his invention a “digesteur” (“digester”.) He created a very large vessel made of very thick cast iron. The lid locked on, allowing pressure to build up in the pot.

In America, in 1902, patents were issued for 50 gallon pressure cookers for cooking in hotels.

Mention of “pressure cookers” for canning starts appearing in American newspapers as early as 1914:

“The third or fourth canning outfits (Nos. III and IV) may also be obtained from a reliable dealer. These depend entirely on steam rather than a lot of water for cooking the fruit or vegetables and are called “steam-pressure cookers.” The cooker with 5 pounds pressure (No. III) does the work in much quicker time than the water-seal outfit, and the cooker with a pressure of 10 pounds or more (No. IV) in some instances will accomplish the work in half the time needed for the 5-pound-pressure cooker. For example, corn may be satisfactorily prepared in the 5-pound-pressure cooker in 60 minutes and in the 10-pound-pressure cooker in 40 minutes.” [2]Time Table for Girls Who Can Fruit. Indiana, Pennsylvania: The Indiana Democrat. Wednesday, 2 September 1914. Page 1.

In the 1940s, as migration to the city from the farm started in America, manufacturers started to making smaller ones more suited to being used as pots in city kitchens, rather than the large ones which served as canning kettles in farmhouses with more storage space. At the same time, though, the manufacture of them became difficult, as aluminum was rationed for the war effort. The American War Production Board, though, continued both to encourage and to authorize the manufacture of large canning ones, as self-sufficiency for food on the home front (via preserving food from Victory Gardens) was very important to free food up for the troops.

“Further evidence of the success of the Victory Garden could be seen in the popularity of pressure cookers. An indispensable tool for the home canning enthusiast, sales of the cookers skyrocketed. In 1942, their sales in the United States were pegged at 66,000. Just a year later, in 1943, that number jumped to 315,000.” [3]Moser, Joann. Mason Jar Nation: The Jars that Changed America. Cool Springs Press. 2016. Page 22.

There were 11 manufacturers of pressure cookers when America entered the war in 1941. When the war ended in 1945, there were over 85 manufacturers of pressure cookers, who started flooding the market with quickly and cheaply made ones to satisfy the demand that had been pent up during the war. These were made in the late 1940s, and 1950s, and many of these were very unsafe, and gave pressure cookers a bad reputation in North America which still persists in some minds as of today. These shoddy pressure cookers were of poorly cast metal, and had no safety features. These are the ones that put holes in ceilings. Some innocent people still buy them cheaply in yard sales, or unsuspectingly inherit old ones from relatives’ basements.

The poorly-made North American models from that era didn’t even have a quick pressure release, like even older European ones did. You had to put the pan in a sink of cold water, and let it stand there for anywhere from 10 to 30 minutes to bring the pressure down — cooling your food at the same time.

The shoddy manufacturers eventually went out of business and left just the good ones. But fears and hear-say stories about pressure cookers continued to spread, just as other kitchen time-savers such as frozen foods, dinners and other prepared foods for fast meals were hitting the market, and then in the 1970s, microwaves came along. Consequently, North Americans never had any wide-scale incentive to take a second look at pressure cookers as time-savers, and as far their energy-saving capability was concerned, energy-saving did not start to become a serious concern in North America until the last quarter of the 1900s.

Europeans never experienced this blip of bad manufacturing that Americans did, and so pressure cookers became a household feature there.

Pressure cookers were introduced into India in 1950: in the south of India by T.T. Krishnamachari & Co., in the north by the Hawkins company. They were priced affordably, and the manufacturers marketed them based on their fuel savings.

Lagostina popularized pressure cookers in Italy in the 1960s.

On International Women’s Day, Tuesday, 8 March 2005, the President of Cuba, Fidel Castro, announced that the Cuban state would strive to make 100,000 pressure cookers available each month to households available at subsidized prices. The average Cuban wage at the time was about $12.00 US a month; imported pressure cookers cost $25. The government ones would cost around $6.00, and could be paid for in monthly instalments. Castro received a standing ovation from women in the audience, who were largely members of the government’s women’s support group. The programme was to start in the next month, in April.

A pressure cooking revival began in North America with the advent of electric, countertop, programmable pressure cookers starting in the early 2010s, which consumers seemed to trust more than the stovetop ones.

We recommend Laura Pazzaglia’s site, Hip Pressure Cooking, as well as her book of the same name as a learning guide and reference for pressure cooking. Her site also has many pressure cooker manuals on it.

This web site generates income from affiliated links and ads at no cost to you to fund continued research · Information on this site is Copyright © 2022· Feel free to cite correctly, but copying whole pages for your website is content theft and will be DCMA'd.
Tagged With: Pickling, Pots, Preserves