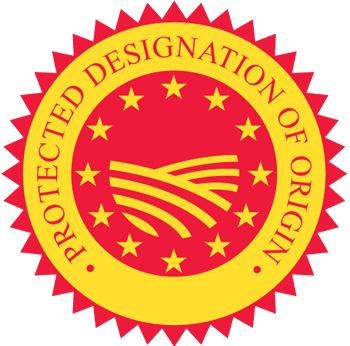 Protected Designation of Origin (PDO) is a European Union product certification system based on the French AOC system. Like the AOC system, it also holds to the French idea of “terroir”, that where something was made or grown affects the end product. Manufacturers have to first get approval by a national certification commission, then go to the EU level and apply for PDO. The PDO certification is regulated both by national commissions and by associations for that product.

PGI is a very close designation, but it used for products that aren’t quite as tied to the local region.

PDO status is indicated by a red logo (changed from blue in May 2010.)

The PDO Act was passed in 1992, coming into force in July 1993, as EU Regulation (EEC) No 2081/92. The following cheese names got labelled as generic, so that no one could PDO them, effectively locking out others from making them: Brie, Camembert, Cheddar, Emmentaler, Edam and Gouda. The Netherlands protested against the inclusion of Edam and Gouda on the generic list, and applied for PDOs and PGIs on them starting in 1996. The first list of PDOs was published in 1996. By spring 2004, there over 700 items on the PDO list.

Parma Ham is another Italian product that has PDO status. Starting in 1997, they took on the UK grocery-store chain called Asda (now owned by Wal-mart.) Asda had been buying authentic Parma PDO protected ham in large pieces. They were bringing it back to England, slicing it and packaging it at their plant near Chippenham, Wiltshire, where the slicing and packaging could be done at a lower cost than in Italy (Chippenham has been a bacon and ham centre in the UK for centuries.) The “Consorzio del Prosciutto di Parma” was livid and jumped all over this, with the court battles starting in 1997. The argument that the Consorzio used was that part of the quality was how the plastic packaging was applied, and that they had to stop anyone else from doing this in order to protect consumers. They never mentioned, of course, that if they could handle the steps of slicing and packaging themselves at prices they decided to set, that would be an additional increase for the consumer. In May 2003, Asda finally lost. The EU judges ruled that Asda was breaking the law by putting the ham itself into plastic packages. This can now only be done in Italy. Asda is still allowed to slice the meat, however, but only at deli counters right in front of customers.

The Parma Ham people, though, are still stymied in Canada. Though they trademarked the name “Parma Ham” in America, they were beat to the punch by a Canadian company, Maple Leaf, which trademarked the name in Canada back in 1971. As of 2004, they continue the battle in Canada, having lost at least 3 court battles already.

The EU is now trying to extend PDO name protection all around the world, to prevent cheesemakers in North America, for instance, from making anything called Gorgonzola, Feta or Roquefort. All this is done, of course, in the name of the consumer, though it’s actually big bucks that are at stake. When they’re not brandishing the name of the consumer as the flag for their cause, they actually do make a fair point, though: using the name of their product when you’re not making it the same, they say, is “stealing from them” by trading on their reputation.

English-speaking countries outside the EU — such as Australia, Canada, New Zealand and United States are opposed to the idea of protected names for such products. In their minds, such product names are generic, and the EU’s efforts are both protectionist and colonialist. Some wags say the next thing PDO’d will be “French Fries.” America is not innocent in these matters itself, though: the Napa Valley Vintners Association wants to regulate who can use the word Napa, and even though America doesn’t regulate who can use the word “orange juice”, they do their darndest through high tariffs to keep Brazilian orange juice from landing on American shores.

Oftentimes, the very people in favour of certifications and restrictions such as the PDO turn out to be the same ones who campaign against Intellectual Property rights for drug companies, with the argument that such protections make drugs too expensive for poor people. They may have a point, but the irony of what effect PDO might be having on working-class people’s food budgets appears to be lost on these PDO advocates, who are usually middle-class.

This web site generates income from affiliated links and ads at no cost to you to fund continued research · Information on this site is Copyright © 2023· Feel free to cite correctly, but copying whole pages for your website is content theft and will be DCMA'd.
Tagged With: Protected Designation of Origin