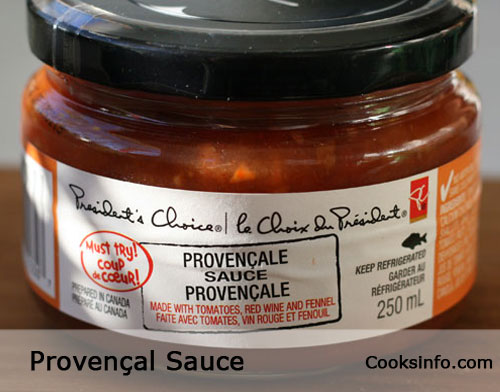 Provençal Sauce is a sauce used in cooking in France. It is meant to conjure up images and memories of the Provence area of France.

Recipes for the sauce vary. There are two main categories: with and without tomatoes.

While many people now associate the Provence area with foods such as tomatoes, it’s important to remember that civilisation in Provence is very old. Greek colonists founded the city of Marseille there in 600 BC, and then the Romans came after them. Consequently, there were a few thousand years of cooking traditions in Provence before New World tomatoes came along — tomatoes were accepted as a food item in France only towards the end of the 1700s. That’s relatively recent as far as Provence is concerned. Consequently, very old, traditional versions of a Provençal Sauce don’t use tomatoes. Ingredients for these traditional versions may include basil, olive oil, onion and red pepper (not that red peppers aren’t a New World food, too.)

More “modern” versions (e.g. 19th century onwards) of Provençal Sauce use tomatoes; most of them also have in common butter, garlic, parsley, shallots, sugar and white wine (dry.) Tomato-based ones will often be referred to as “Sauce Provençal Chaude” to indicate that they are meant to be served warm.

Some modern versions further add some or any of the following: black olives, capers, lemon zest, mushrooms, rosemary, fennel seed or shrimp broth.

This web site generates income from affiliated links and ads at no cost to you to fund continued research · Information on this site is Copyright © 2022· Feel free to cite correctly, but copying whole pages for your website is content theft and will be DCMA'd.
Tagged With: French Sauces, Provençal, Provençal Food