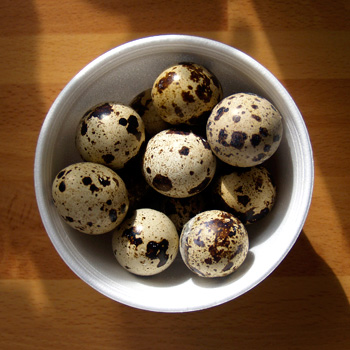 Quail Eggs are much smaller than chicken eggs, but have a similar taste.

In fact, there’s no point for instance in scrambling them, as then no one would know the difference. Their size is their main appeal.

The colour of the shells will vary by species of quail. Some are bluish; more are tan or buff-coloured with dark brown or black speckles on them.

The membrane inside the shell is tougher than that of a chicken egg, perhaps to make up for the thinner shell they have. After they’ve been boiled, some advise concentrating on getting the shell off first, then the membrane.

Quail Eggs have become very popular in Asian cooking since the 1990s. Asians like the small size and delicacy of them. Around the 1990s, farmers in Asia realized that they’d have a market for the eggs and so began expanding their capacity. In many parts of Asia, you can buy the eggs fresh in packs, or cooked and canned. The canned can be a bit rubbery, but that is fine if they are used in dishes where the fresh would acquire that kind of texture anyway.

In South Korea, you can get Quail Eggs in just about every supermarket or small convenience store, fresh or already cooked.

In the Philippines, you can get them from street vendors (particularly at bus stations), served to you boiled with salt on the side, or as “kwek kwek”. For kwek kwek, the eggs are hard-boiled (through steaming), peeled, dipped in an orange-coloured batter and deep-fried, and sold along with a chile and vinegar sauce.

Female quail can start laying eggs at around 60 days of age. They generally lay for a few hours in the afternoons.

To “hard-boil” them, in Asia, the eggs are usually steamed rather than boiled, as the shells are thinner than chicken eggs.

Quail Eggs are easier to peel if they are at least a week old. To rush things, you can leave them out of the fridge in a cool place for 3 to 4 days.

Quail Eggs are usually served hard-boiled as a garnish or hors d’oeuvre, rather than as a breakfast egg. 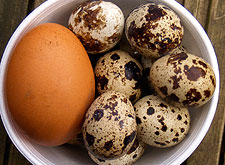 He served plover eggs, which were almost exclusively enjoyed by people with large estates, as you had to get them from your own grounds in the springtime. A servant would have delivered them to Sebastian at Oxford.

Sebastian lived at Christ Church, high in Meadow Buildings. He was alone when I came, peeling a plover’s egg taken from the large nest of moss in the centre of the table.

“I’ve just counted them,” he said. “There were five each and two over, so I’m having the two. I’m unaccountably hungry to-day.”

This web site generates income from affiliated links and ads at no cost to you to fund continued research · Information on this site is Copyright © 2022· Feel free to cite correctly, but copying whole pages for your website is content theft and will be DCMA'd.
Tagged With: Quail