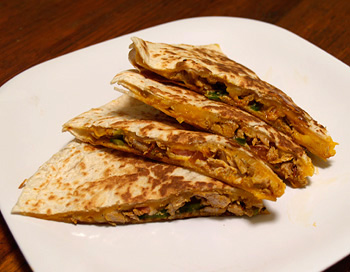 There are two different versions of quesadillas; both involve melted cheese inside a tortilla.

In Tex-Mex cooking (American-style Mexican), a quesadilla is a tortilla on the bottom, cheese in the middle and a tortilla on top, making a rounded cheese “sandwich” which is then cooked and served on a plate. Both tortillas are flour tortillas.

Good cheeses to use for either version include Monterey Jack, goat cheese, Oaxaca Cheese, Queso Fresco, Queso Blanco, Manchego, Chihuahua (sic), Caciotta, or Cotija. A mild cheddar cheese makes a good substitute. You can mix cheeses; a good melting cheese like Monterey Jack (or mild cheddar), with a flavourful cheese such as Cotija (or Pecorino Romano.)

In addition to the cheese, other fillings can go inside. They can be anything — meat, vegetable, even fruit. There shouldn’t be too much, though, so that the Quesadilla becomes bulky and awkward. The fillings inside really won’t have any time to cook, just heat, so bear that in mind: meat and fish fillings should be precooked, as well as veg such as potatoes, etc.