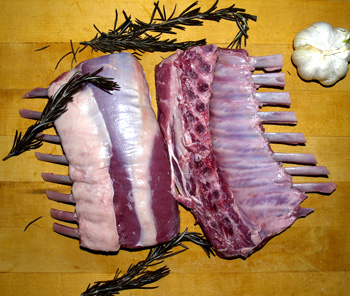 A Rack of Lamb is a cut of meat from part of the rib cage of the lamb. It is an expensive cut of meat.

Generally, there are 8 ribs in a full rack, ribs 6 through 12 inclusive. Sometimes the cut is just 7 ribs, or it is 9 ribs; in the UK, it is sometimes cut as 6 ribs. It can be cut into as many lamb chops as there are rib bones in it.

The bones in it are rib bones and backbone.

The cut has the eye muscle in it, but no tenderloin.

To French it, you cut away from the meat between the tip of the bones to make the tips of the bones more prominent. Most restaurants serve it this way for better presentation.

It has a fell (a sheet of tough gristle) on it, which is usually removed by the butcher. The butcher will usually crack the backbone as well to make it easier to carve.

Crown roasts can be formed by tying 2 or 3 of them together in a circle. A Lamb Guard of Honour can be made interlacing the ribs from two racks together at the top, then tying them together.

The USDA FSIS (United States Department of Agriculture Food Safety and Inspection Service) defines the rack for its own purposes, however, as the “unsplit primal rib” (i.e. both sides of the animal joined by the backbone, aka “hotel rack.”)

An unsplit rack of lamb (e.g. the ribs on both sides are still joined together at the top), is sometimes also called an “Hotel Rack.”

To recap your lamb primal cuts, working backwards from the neck of the lamb, the shoulder section comes first, then the rib section, then the loin, then the rump (aka chump.)

It is very easy to carve, so it is usually carved at the table. You just carve between each rib.

The traditional term for this in England was “best end of lamb”, but “rack of lamb” is now replacing it to avoid confusion with the neck cut called Best End. Also called just “Lamb Ribs.”