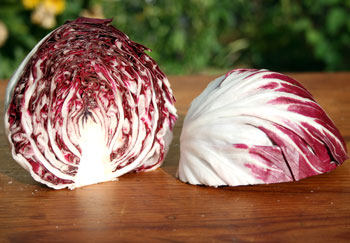 Radicchio is a leafy salad vegetable with dark red leaves. It is a variety of chicory, making it a member of the endive family. It is generally about 4 to 6 inches (10 to 15 cm) long.

Much of our Radicchio is imported from Italy, not because it won’t grow elsewhere, but because the Italians have mastered the technique of making it. You see, Radicchio is partly a natural thing that is grown, and partially a product that is “man-made.” The plants are harvested with green leaves, then stored in cold, dark rooms until they are needed at the stores. The temperature is raised, and their leaves take on the red colour and the bitterness for which they are prized.

But California’s Napa Valley is “on the case” now, and how much longer will it be, as in everything else, before California becomes the world’s largest producer?

There are several varieties.

Perhaps the most common Radicchio. Maroon leaves with white ribs in a tight round head about the size of a grapefruit.

Almost looks like a large rose. Creamy coloured leaves with red specks and red stripes on them. Starts off round, then unfurls like a head of lettuce would. Usually served raw.

A green Radicchio that looks like a very small iceberg lettuce.

<h2>Treviso Radicchio</h2>]The narrow, pointy baton-shaped kind with a tight head of leaves that almost looks like red Belgian Endive. Has the mildest flavour of almost all the Radicchios. Treviso is a city in the Veneto region, where this variety was developed. Italians like to cook with Treviso.

Treviso Radicchio is harvested, leaving the root behind in the soil. The root itself is then harvested, replanted and forced like Belgian endive, resulting in Tardivo (meaning late.) Its leaves are more like ribs; the ribs are creamy-white, curl inwards at the top and turn dark red at the tips. The flavour is a bit stronger than in regular Treviso.

One variety of Verona has loose leaves; another forms a tight round head. Both have dark red leaves and white ribs.

When buying Radicchio, choose big ones over small ones. The small ones are just big ones that sellers have been trimming the outer leaves off of as the Radicchio gets old — so size is an indication of freshness, as are the roots, if they are still attached. Browned, shrivelling roots are a sign of age. Look instead for fresh, white roots.

It can be used raw or in cooking. Either way, it is usually mixed with other items, so that its bitterness can act as a complement to their flavours.

Wash under cold water, shake to dry. For salads, bust into individual leaves. For cooking, halve or quarter it.

Adds great taste and colour to salads. A little goes a long way.

To cook on its own, brush with olive oil, sprinkle with Parmesan and grill for 5 minutes. Or fry in olive oil over gentle heat for 3 minutes.

Each head will have about 8 leaves.

Remove outer leaves, wash, dry on paper towel. Store in an airtight container or sealed bag for up to 3 weeks in refrigerator.

The Egyptians and Romans grew and ate something like Radicchio, and it was popular throughout the Middle Ages, but it wasn’t the dark red Radicchio we have today. The technique of developing the red colouring was developed in the 1860s in Italy by a Belgian.