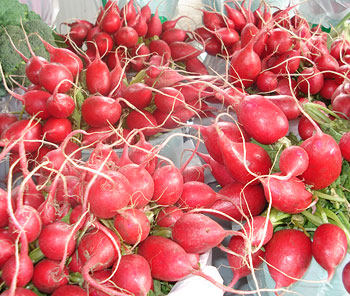 Radishes are a branch of the cabbage family that we are more interested in for their roots (as is also the case for turnip.)

There are three main varieties of radish in North American and in UK stores. (If you are a home gardener, there are actually 150 varieties available to you.)

The first, by far the most common, are Red Globe Radishes, the ones that everyone thinks of when they think of a radish. A small red ball about 1 inch (2.5 cm) wide, red on the outside and white on the inside.

There are also White Icicle Radishes. These are available earlier in the year and have a milder flavour. They are long like a carrot, with white skin.

The third type is Asian Radishes, which are now appearing more and more. See the entry on Daikon Radish, which is an Asian Radish.

Radishes sold in bunches with their tops on, rather than in bunches with the tops removed, are the freshest (provided the leaves look healthy.) Packaged radishes will last longer, though. There is no particular advantage to having the leaves. Radish tops aren’t eaten, as other leaves of the cabbage family are, because they aren’t particularly tasty or nice. You discard them anyway as soon as you get them home.

Radishes get stronger tasting as their growing season progresses; early ones will be relatively mild.

Wash under cold water, top and tail them.

If you wish to peel any of the White Icicle Radishes you can use a vegetable peeler or paring knife, then slice or grate depending on how you are using them.

Radishes make a great addition to a relish tray. In France, the elongated variety called (in English) “French Breakfast Radishes” are often the way to start a meal: they are served with butter, sea salt and crusty bread. You split the radish with your knife, spread it apart a bit, put a bit of butter in, dip it in the sea salt on your plate, and enjoy with the bread.

Any type of radish can also be cooked.

Radishes are a good source of vitamin C, but not much else. But the good news is that they do seem to stimulate flagging appetites, while being very low in calories (10 small Red Globe Radishes will have only about 8 calories).

If you have bought them with the tops on, twist off and discard the tops, and store the radishes in a plastic bag in the fridge for up to two weeks.

If any radishes seem to be flagging by going a bit soft before you use them, you can crisp them up again by soaking them in ice water for an hour or two. 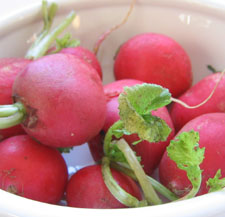 Radishes probably originated in China, and made their way across Asia, into the Middle East, and thence into Europe. Europeans introduced radishes into Central America around 1500; the British brought them to North America when they settled there.

The Egyptians and Greeks raised and ate radishes. The Romans raised and ate many more varieties, including some that looked like our common round ones. They were certainly being grown in England by the 1500s, though probably much earlier. European radishes, it seems, used to be much larger in general, more like the Asian ones. There is no written record of the small ones until the 1500s.

In France, radishes would be served when you began a meal, to clean your palate and get it ready for the delights that were follow. In the same vein, Ben Johnson suggested eating a radish before drinking wine.

This web site generates income from affiliated links and ads at no cost to you to fund continued research · Information on this site is Copyright © 2022· Feel free to cite correctly, but copying whole pages for your website is content theft and will be DCMA'd.
Tagged With: Ancient Egypt, Ancient Greece, Radishes, Roman