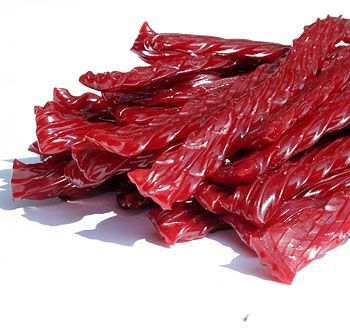 Many people who despise black liquorice will eat the red — that’s because Red Liquorice is not really liquorice at all. It does not contain any liquorice extract or anise flavouring.

Red Liquorice is sweeter than the black, and is usually strawberry or cherry flavoured. It comes in several forms. One is hollow twisted sticks called Twisters, Twizzlers, Vines or some variation on that; another is long, thin strings called “shoe laces”; yet another is small pieces of candy called “Bites” that are hollow inside like honeycombs (the Kookaburra brand of Red Liquorice in Australia is similar to these.)

People who love black liquorice snort in the general direction of Red Liquorice. The reaction from people who like Red Liquorice is generally that nothing could induce them to eat the black, so the others might as well chill.

This web site generates income from affiliated links and ads at no cost to you to fund continued research · Information on this site is Copyright © 2021· Feel free to cite correctly, but copying whole pages for your website is content theft and will be DCMA'd.
Tagged With: Liquorice