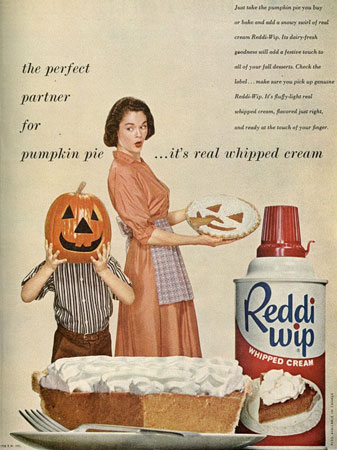 Reddi-wip Magazine Advertisement from the 1960s

Contents hide
Reddi-wip is a trademarked brand name of aerosol cream — whipped cream that you spray out of a can.

See main entry on aerosol cream for an explanation of how it works.

In North America, there are many companies that produce aerosol cream, but chances are no one will know what you mean unless you say “Reddi-wip.” People who know their aerosol creams maintain that Reddi-wip is heads and tails above others.

Reddi-wip has achieved an iconic status.

Keep Reddi-wip refrigerated, and once opened, use within a few days.

In 1946, three researchers at the University of Illinois formed a company called Aerated Products Corporation and began aerosol cream. Their product came in a refillable container that had to be returned to be refilled.

By 1948, their main competitor, Reddi-wip, was born with a more convenient disposable, single-use container and a better nozzle.

The driving force behind Reddi-wip was a man named Aaron “Bunny” Lapin (born 5 January 1914 in St Louis, Missouri.) “(‘Lapin’ is French for ‘rabbit,’ hence the nickname)” [1]Eschner, Kat. This Patent Was the Hallmark of an Aerosol Whip Cream Empire. Smithsonian Magazine. 15 March 2017. Accessed February 2021 at https://www.smithsonianmag.com/smart-news/patent-was-hallmark-aerosol-whip-cream-empire-180962455/

Reddi-wip overtook the market quickly, and to this day half of all the spray-can whipped cream sold in North America is Reddi-wip. All Reddi-wip is made and packaged in Holland, Michigan (as of 2004.)

Bunny Lapin also tried to market Reddi-shave, a spray can shaving cream, but he found he could make more money selling the can nozzle mechanism to other shaving cream manufacturers, and so discontinued the product. His later attempts at spray-can cinnamon-flavoured margarine and spray-can pancake batter didn’t take off. According to Aerosol Age magazine, Lapin lived in Hollywood in the mansion that formerly belonged to Gloria Swanson; he died in 1999, age 85.

His wife, Sondra Lapin (now Metzger), a Canadian, remarried in 1996 to a Lee Metzger (died 2005) and moved to San Clemente, California, where she became a watercolour artist.