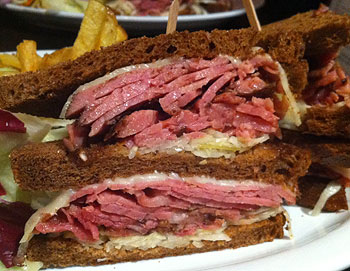 It is often referred to as a “grilled sandwich”, whereas in fact it is a “griddled” or “fried” sandwich.

To make a Reuben sandwich, you spread both pieces of rye bread with the Russian dressing. On one piece of bread, you then put a layer of sauerkraut, then a slice of corned beef, then a slice of Swiss cheese, then cover this filling with the second piece of bread, dressing side down. You then butter both outsides of the sandwich, then toast it on a griddle or in a frying pan until golden brown.

The outside is griddled in butter so that it becomes hot and crispy. The inside stays relatively “cold”; the cheese should melt just a little, and the meat get just a little warmed.

The sauerkraut needs to be well-drained: a soggy Reuben is the sign of a lazy cook. Many say its best to marinate the sauerkraut in the Russian dressing 24 hours ahead of time. Some people use coleslaw instead, but Reuben sandwich purists refuse to even speak to these people unless they agree to call that version a “Rachel.”

As Russian dressing can be difficult to get hold of, Thousand Island Dressing is often swapped in, or a mixture of mayonnaise, ketchup and green relish used.

On first blush, the combination of meat and cheese makes this a combo you really wouldn’t expect to find in a Jewish deli, because the combination is not kosher. It is, however, part of the Jewish food culture in North America, enjoyed by those who are not strictly Orthodox.

Turkey is often substituted for the corned beef, but then it’s not a Reuben sandwich, either. A sandwich called a “Reuben’s Special” consists of ham, turkey, Emmenthal cheese (e.g. real Swiss cheese), coleslaw, and Russian dressing on rye.

As with many well-loved dishes, there are predictably several versions of how the Reuben sandwich was created.

One is that it was created at Reuben’s Delicatessen in New York, at Madison Avenue and 59th Street, owned by Arnold Reuben. In 1914, Annette Seelos, an out-of-work showgirl (wife of the actor Al Kaufman, died 23 October 1918 in New York) had just got a small part in a Charlie Chaplin film being made in New York. She told Reuben she was hungry enough to eat a brick and asked him for a free sandwich. [In a 1938 interview, he referred to her as “Anna Selos”.] He made her a hearty sandwich from Virginia ham, roast turkey, Swiss cheese and cole slaw on rye bread. She raved about the sandwich and asked him to name it after her; he liked the idea of naming the sandwich more than he liked her, so he named it after himself. This version of the story is almost certainly spurious, though Reuben himself recounted it. Chaplin was filming a move in California at the time, not New York. There is no record of Seelos having been in any of Chaplin’s film. And, Reuben’s on Madison did not even open until 1918. (This version appeared in The New York Times Food Encyclopedia by Craig Claiborne as told to him by Patricia B. Taylor, Arnold Reuben’s daughter.) The combination of ingredients, though, called a “Reuben’s Special”, was indeed on the menu at the deli for many years.

Another version has the sandwich invented in Omaha, Nebraska, sometime between 1920 and 1935 at a regular weekly poker game. One of the players was a man named Reuben Kulakofsky (aka Reuben Kolakofsky, Reuben Kay, c.1874 to 6 March 1960, who immigrated from Lithuania to America in 1890.) He was co-owner from 1900 to 1943 of a wholesale grocery store called “Central Market”. Another member of the group was Harvey Newbranch, at one time editor of the Omaha World-Herald. The poker games were held at the Blackstone Hotel. Reuben made a sandwich for himself regularly which used rye bread and had corned beef, cheese and sauerkraut on it. Reputedly Reuben first used sauerkraut because the hotel kitchen had run out of lettuce. Some pinpoint Reuben’s sandwich existing as early as 1922.

One of Reuben Kay’s poker playing buddies was a man named Charles Schimmel, an immigrant from Vienna, Austria. It was Schimmel who owned the Blackstone Hotel in Omaha (built 1915, purchased by Schimmel in 1920.) Schimmel liked Reuben’s sandwich, and put it on the menu at his hotel, naming it after Reuben (though the menu spelt it as “Rueben”.) Schimmel’s son, Bernard (who cooked for the hotel’s restaurant called “Plush Horse” or “Orleans Room”; he had studied at the Hotel School at Lausanne, Switzerland), modified the recipe by using Emmenthal as the cheese, adding Russian dressing, using pumpernickel bread and griddling the sandwich in butter to toast the outsides. The hotel charged 50 cents for the sandwich. There is one lingering problem with this story, though: what would Reuben Kulakofsky, whose memorial services were held at Beth El Synagogue, be doing throwing a piece of cheese on a meat sandwich in the first place? Bernard’s daughter, Connie Shapiro, later credited her father with the invention of the entire sandwich, including the griddling.

The first written mention of a Reuben Sandwich, matching the accepted ingredients today of corned beef, sauerkraut, Swiss cheese and rye bread, seems to be on a menu from 9 October 1937 for the Cornhusker Hotel in Lincoln, Nebraska, though the menu does not mention if it were griddled or not.

Whoever invented the sandwich, it only became famous across America in 1956. A Miss Fern Snider of Omaha, who was a waitress at the restaurant at Schimmel’s Blackstone hotel, entered the sandwich in the National Sandwich Idea Contest in September 1956, sponsored by the National Restaurant Association and Standard Brands. The story of the contest, and of the first-prize winning sandwich, was carried in the American Restaurant Magazine(September 1956, page 105.) At the time, Fern was identified as the “chef at the Rose Bowl Restaurant in Omaha, Nebraska” (though in another write-up elsewhere, the National Kraut Packers Association identified her as “a waitress, Miss Fern Snider of Omaha.” Second and third runner-up sandwiches were, respectively, a Delmonico Steak Sandwich, and a Curried Cheese and Olive Broiler Sandwich.

In the late 1980s, Reuben’s Delicatessen sold both a “Reuben Sandwich” and a “Reuben’s Special.”

A reconciliation of the two versions of the sandwich’s origins may be that Reuben’s served a sandwich they called the “Reuben Special”, and may not have heard of a Reuben Sandwich until the sandwich contest of 1956. Ed Schimmel, son of Charles and Brother of Bernard, said (in The Omaha World-Herald, 1965) that he once visited Reuben’s in New York, and asked for a “Reuben Sandwich”, but that they hadn’t heard of it. Many New Yorkers often say they never heard of one, either, much before the 1970s.

But then, late in 1993, Reuben’s son, Arthur Junior, came up with a whole newer version of the story, saying that one of the cooks at the restaurant had invented it for him in the 1930s. The cook said he was tired of seeing the young Reuben eat just hamburgers, so invented him a sandwich of corned beef, Swiss Cheese, and sauerkraut on toasted rye.

Yet another version says that an accountant named William Hamerly created it, and named it after Arnold Reuben.

You know, I used to be a pedlar when I was a kid and I used to own a little shtoonky delicatessen store on Seventy Third Street and Broadway. Well, today, you got a look at the layout downstairs didn’t you? Well, what do you think of it? Nice, uh? Well, you know we’ve got all the celebrities coming in and out almost any night and they eat my sandwiches, so once I got the idea to name a sandwich after a celebrity, and that’s how it all started. Sort of somebody once said I was the father of the sandwich. Have you ever eaten a Reuben Special? Yeh, boys, we get orders for a Reuben Special Air-mail from California. We ship all over the world. From a Sandwich to a National Institution.

Look, boys, I sit up here and sometimes I laugh; you know, I laugh up my sleeve. Other delicatessen men, they began where I did in a shtoonky little store someplace, dirty, filthy, no machines then, everything by hand, well they never had any ideas. During the war I made a nice little pile. You know war time. Well then, every little delicatessen owner used to keep a few cans of anchovies and caviar in stock. Just a few cans at a time. Well, I figure it out that when things really get going nobody would be able to import the stuff. So what do you think I did? I went around to each little shtoonky place buying up a few cans at a time, and when things got hot and you couldn’t get some good anchovies or caviar for love or money, who do you think you had to come to? Yes boys, you see!

Well, I’ll tell you about how I got the sandwich idea. I owned a delicatessen on Broadway and one day a dame walks in, one of the theatrical dames, and she’s down and out I suppose, and she asks me for something to eat. Her name was Anna Selos. Well, I’m feeling sort of good, so I figure I’ll clown around for the dame. That’s how it all came about. I’m clowning for the dame. Well, what do I do? I take a holy bread that I used to keep and grab up the knife and, you know, clowning like, I cut it right through on the bias. Then I take some roast beef, I don’t remember exactly what. But, anyway, I figure I’ll put anything on. So I take some meat and cheese and I slap it on, and I put on some spice and stuff and I make her up a sandwich; it was a foot high. Well the dame just eats it, that’s all. She must have been plenty hungry.

And when she gets through she says, “Mr. Reuben, that’s the best sandwich I ever tasted in my life.” Well, the idea comes to me in a flash. I’ll call it the Anna Selos sandwich, after the dame. Then, one night, she brings some friends up, you know, stage people and a newspaper man, and this guy he goes right behind the counter and makes himself up a sandwich, and then he tells me why I don’t call the sandwich after celebrities? Like what happened with Anna Selos. Why don’t I call it the Anna Selos sandwich? Well, boys, in a flash, I get the idea. Anna Selos! I’ll call it a Reuben Special. And that’s how it started.”

— From “Reuben And His Restaurant: The Lore Of A Sandwich”. Interview with Arthur Reuben, conducted by Arnold Manoff on 18 December 1938. American Life Histories: Manuscripts from the Federal Writers’ Project, 1936-1940. Retrieved 1 July 2006 from http://memory.loc.gov/ammem/index.html.

“Reuben sandwich: There are many different versions of this sandwich. Basically, it is made with corned beef, Swiss cheese, and sauerkraut, after which it is toasted. The old Reuben sandwiches I remember were made of thickish slices of pumpernickel, corned beef, sauerkraut, chicken breast or turkey breast, Swiss cheese, and Russian dressing. They were rather stupendous, but made a perfect summer meal and were also well fitted for a picnic.” — Beard, James. American Cookery. Boston, MA: Little, Brown and Company. 1972. Page 805.