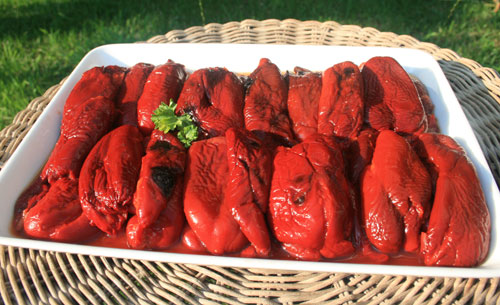 Contents hide
Roasted Peppers are peppers that have been cooked by roasting over an open flame, or more usually, by baking to produce a similar “roasted” effect. The peppers could be sweet peppers or hot peppers. The roasting deepens their flavours and gives their flesh a meat-like texture.

The peppers can be served on their own as an antipasto, or used as an ingredient in a dish such as sauces, salads, sandwiches, etc.

After roasting, the peppers are peeled and deseeded, so that the tough peel and small seeds do not get stuck in your teeth.

You can buy already-roasted peppers at deli counters or in jars or cans. They may be packed in a light brine, a vinegar solution, or an oil. Some brines and vinegar solutions impart more of a taste to the peppers than others do.

Roasting Peppers is a bit of work — enough that, combined with the fuel costs, it makes you appreciate why Roasted Peppers cost so much at deli counters. But they really are good like this, whenever you have the time.

You roast peppers whole and unsliced. Leave the stem on. You can leave any paper food label that is stuck on; it will come off later with the skin. Wash the peppers before roasting.

There are two methods of cooking them: 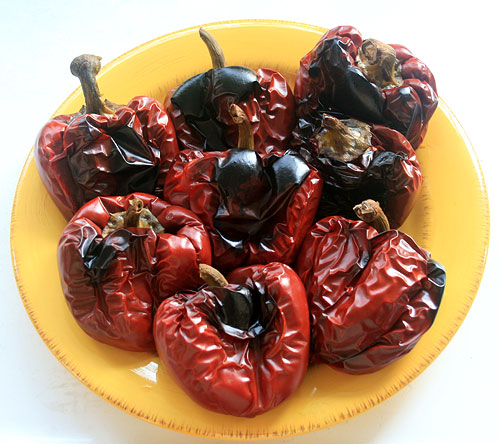 Some people prefer the baking method rather than the open-flame method. Other people add that a medium heat around 200 C (400 F) is best, because if the heat is too low, the peppers will just dry out; too high, and the outsides will get burnt before the inside is roasted.

If you bake them in the oven, you can save yourself some cleanup work if you cover the baking tray you’re going to put them on with tin foil first. Don’t bake them just on oven racks, as they will release a lot of liquid.

Whichever method you used, pop them for 20 minutes into either a sealed plastic bag, a paper bag, or a large covered pot. Or, if you did them in the oven, leave them in the oven with the door closed. (This helps them to peel more easily.) When they have cooled, remove the stem on them by holding them upside down, digging your fingers up inside the pepper around the seed sac at the base of the stem, and pulling both the seed pouch and the stem out together. This will get the bulk of the seeds all in one go. Then peel just by tugging and pulling at loose areas of skin. Sometimes a pepper will just fall out of its skin owing to gravity. You likely won’t get every last bit of the skin; you just want to get most of it. Discard both the skin and the seeds.

Packing Roasted Peppers in oil adds greatly to the caloric value of the peppers. When packed in water or a light brine, Roasted Peppers are a free food on Weight Watchers.

All measurements assume the roasted pepper is stemmed, seeded and peeled 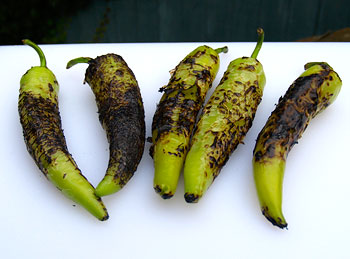 After roasting, peel and seed. Pack in appropriate quantities into freezer bags or containers, and freeze for up to 6 months. There is no need to coat them in oil, etc. Some advise that they freeze better longer if frozen with the skins on — but then you lose the ease of hauling them ready to use from the freezer.

To thaw quickly, pop the bag into hot water for 10 to 15 minutes. You can use them exactly as you could have if they had not been frozen.