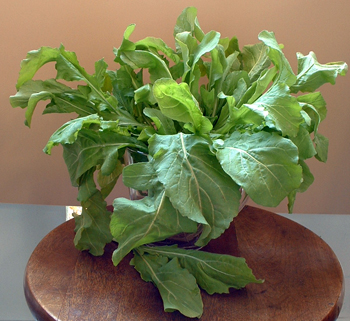 Rocket (aka Arugula) has a peppery, pungent, mildly bitter or acrid flavour.

As for any salad green, you want bright green, crisp leaves as opposed to yellow or wilted ones.

Rocket, like mustard and watercress, is a member of the brassica (cabbage) family; its seeds are even like those of mustard plants, though a bit larger. In temperate climates, you can grow it as a biennial plant in gardens. But in northern climates, it won’t survive the winter. You will need to replant some each spring. You harvest it before it flowers. Pinching off any flowers will encourage it to put energy back into the leaves.

To use, cut off the roots, if still attached. The leaves can attract and hold a good deal of grit and soil, so you need to give them a really good wash, just as you would for spinach.

Rocket is mostly used as a fresh salad green. It can, though, also be used in cooked dishes. You toss it in at the last minute, just before serving. The flavour gets milder when it is heated through contact with the cooked ingredients in a dish.

Watercress (though if you don’t like rocket, chances are you won’t like watercress either); or endive, escarole, radicchio, chicory or young dandelion or mustard greens.

Don’t wash before refrigerating. If the roots are attached, wrap them in a damp paper towel, put in a plastic bag and refrigerate up to two days.

Rocket is native to Southern Europe, where it grows wild. Rocket was popular all throughout Europe including Britain during the Middle Ages. Then, a fashion victim of the changing times during the Victorian era, its popularity waned back to just Southern Europe, until the 1990s when it was rediscovered in the UK and in North America.

In North America, Rocket is usually called “Arugula.” Many people think that is the Italian name, but it isn’t. The Italian word is “rucola” or sometimes “rochetta”. “Arugula” is an English corruption of the word in some Italian dialect, perhaps from Lombardy where they call it “arigola.”

In Latin, “eruca” was a type of cabbage, and the English word “rocket”, the German word “Rauke” and the Italian “rucola” can be traced back to that word.

The Greeks called it Hesperis (“vesper-flower”) because when it flowers, it gives off a scent in the evening but not in the daytime. It is also known as Dames Rocket or Dames Violet.

This web site generates income from affiliated links and ads at no cost to you to fund continued research · Information on this site is Copyright © 2022· Feel free to cite correctly, but copying whole pages for your website is content theft and will be DCMA'd.
Tagged With: Ancient Greece, Rocket