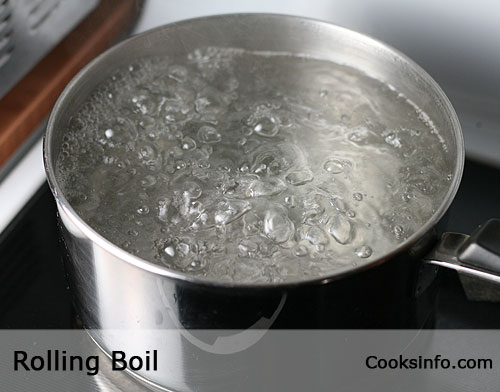 Rolling Boil is a term that describes one of the stages encountered when boiling a pot or kettle of liquid — usually water.

When being boiled, water will reach a stage where it has started to produce bubbles that make it look like it is boiling, but if you stir it, the bubbles briefly go away, making the water appear to stop boiling.

The term “Rolling Boil” describes a stage a few minutes past that, when so many bubbles are being produced so fast from the bottom of the pot, that stirring won’t impact their production.

The bubbles get to be very large. They rocket up from the bottom of the pot, breaking the surface and while rising and breaking they vigorously move about the liquid that is being boiled.

It is much faster to reach this stage with a covered pot — this also saves energy, and slows down evaporation. It’s worth covering the pot to reach this stage more quickly, even if after it you’ll be cooking something which is best to remove the cover for, such as something from the cabbage family,

It’s also desirable to leave the lid off, or at least partially off, once you’ve achieved a full Rolling Boil on a brewers’ wort (malted grain in water, with hops added at the end.) A Rolling Boil helps proteins coagulate in any substance, causing them to later settle to the bottom more easily because they’re heavier, resulting in a clearer brew. But the lid off both allows unwanted flavour compounds such as dimethyl sulfide (DMS) to escape, and for some concentration of the wort because excess water is escaping through evaporation.

Once you leave the lid off, or partially off, it’s true that your Rolling Boil may not be quite so rolling anymore. And once you put something in the boiling water, such as pasta or a vegetable, the Rolling Boil will cease because the temperature of the water will have been lowered.

Rolling Boils drive oxygen out of the water quickly.

This web site generates income from affiliated links and ads at no cost to you to fund continued research · Information on this site is Copyright © 2022· Feel free to cite correctly, but copying whole pages for your website is content theft and will be DCMA'd.
Tagged With: Water